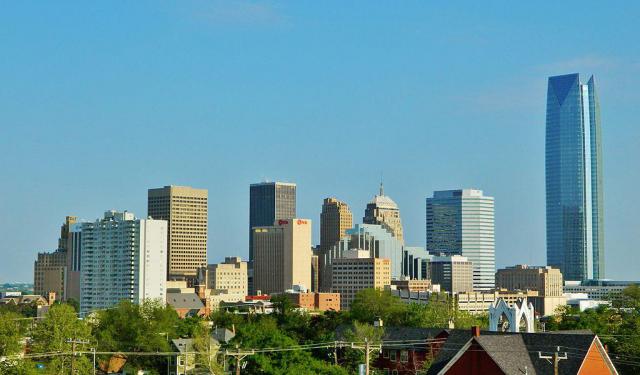 Image by Urbanative on Wikimedia under Creative Commons License.

The capital and the largest city of Oklahoma State, Oklahoma City is known for its cowboy culture and capitol complex, surrounded by working oil wells. There's also a wealth of historic heritage to be found in the city preserved in museums and historic mansions. Oklahoma History Center, located north of downtown, showcases eventful past of this part of the United States. To learn more about Oklahoma City attractions, follow this orientation walk.
How it works: Download the app "GPSmyCity: Walks in 1K+ Cities" from iTunes App Store or Google Play to your mobile phone or tablet. The app turns your mobile device into a personal tour guide and its built-in GPS navigation functions guide you from one tour stop to next. The app works offline, so no data plan is needed when traveling abroad.

This Oklahoma History Museum was started in 2005, managed by the Oklahoma Historical Society. The Center is located north of downtown, close to the Oklahoma Capitol. It is housed in a three-storey modern curved double structure of more than 200,000 sq. ft. The museum comprises over 50 theme exhibitions that highlight the entire period from early history of Native American tribes down to recent times. The themes are dedicated to Native American cultures, Civil Rights Movement in Oklahoma, development of transportation and important industries, a 1950s kitchen and a Depression-era farmhouse, a 1920s African-American barber shop, and others, all allowing the public to admire and experience Oklahoma’s abundant history. There is also a gift shop and a café. The Red River Valley walk tour is arranged outside. The Center is open 10:00-5:00, Monday – Saturday.
Image by farmalldanzil on Flickr under Creative Commons License.
2

The Oklahoma Governor's Mansion is the official residence of the Governor of Oklahoma and is located at 820 NE 23rd Street. The Mansion was completed in 1928, one year after construction began. Built by the Oklahoma City architectural company Layton, Hicks and Forsyth,the 14,000-square-foot (1,300 m2) Mansion is of Dutch-Colonial style. Carthage limestone was used so the exterior of the Mansion would complement the Oklahoma State Capitol.

Over the years, the Mansion's 19 rooms on three floors have been reduced to 12 to increase living space. The rooms include a library, parlor, dining room, grand ballroom, kitchen, sun room and five bedrooms. The governor and family live in the five rooms on the second floor. All major furnishings of the floor were donated to the Governor by Oklahomans. However, as property of the state, they will remain with the Mansion for future Governors. Governor Henry S. Johnston was the first governor to live in the Mansion. However, due to his impeachment he lived there only three months. Governor William H. Murray was the first governor to reside a complete term in the mansion.

Image by Robert English on Flickr under Creative Commons License.
Sight description based on wikipedia
3

The Oklahoma State Capitol is the building that houses the Oklahoma Legislature, and the meeting place of the Oklahoma Supreme Court. It is located along Lincoln Boulevard in Oklahoma City. The present structure includes a dome that was completed during 2002. The state capitol campus is famous for its oil wells and remains the only state capitol grounds in the United States with active oil rigs. The capitol building is directly atop the Oklahoma City Oil Field.

The Oklahoma State Capitol is composed primarily of white limestone and Oklahoma pink granite. However, the building's dome is made of steel-reinforced concrete and reinforced plaster casts. In the Rotunda is displayed Chickasaw artist Mike Larsen's mural Flight of Spirit, honoring the Five Moons, notable 20th-century Native American ballerinas from Oklahoma. The west wing of the capitol houses the Oklahoma House of Representatives chamber and offices. The east wing houses the Oklahoma Senate chamber and offices. The Oklahoma Supreme Court and ceremonial office of the governor are located on the second floor. Elected state officials such as the state auditor and inspector, state treasurer, and state attorney general have offices on the first floor. The building also contains a museum, a cafeteria, and a barber shop. Several large paintings by Wayne Cooper are on display in the building. Many of them depict the early heritage and oil history of the state.

Image by Caleb Long on Wikimedia under Creative Commons License.
Sight description based on wikipedia
4

This memorial belongs to the State Capitol Park, arranged on the sector-shaped ground at the Oklahoma State Supreme Court. It was created as a tribute to the memory of those that fell in the First World War, the Second World War, the Korean and the Vietnam Wars. The bronze statue of larger-than-life sized military men on a meter- high pedestal introduces and dominates the memorial complex. Behind the statue there are four erected panels with dark plates depicting war scenes, Armed Forces and State flags, and a memorial shaft. The funds for the memorial were raised from around the nation and the land was donated by the State of Oklahoma. Oklahoma Veterans is a significant site that opened in 1986.
Image by Carleta Latham on Flickr under Creative Commons License.
5

The museum site occupies about 10 acres at the crossing of Northeast 16th Street and North Lincoln Boulevard. It’s a Victorian homestead placed in the Land Run of 1889. The museum complex includes the Victorian Queen Anne building of the early 19th century, a red barn house with enclosed windmill, a small school, a working farm and an exhibit barn. This intriguing museum is a unique treasure of Oklahoma’s past providing hands-on experience through extensive guided tours, self-guided tours of the grounds and other historic buildings. It’s the kind of place that offers visitors a chance to become part of the history and spirit of the heroic pioneer families that settled in this wild state. The Harn Homestead is open 10:00 a.m. - 4:00 p.m. Monday – Friday.
Image by nalilo on Flickr under Creative Commons License.
6

Another prominent downtown museum, belonging to Judge Robert Hefner and his family, is located in the historic Heritage Hills neighborhood. Constructed in 1917, this Victorian house retains all its old-fashioned allure. It has a ballroom, library, rooms stocked with art, fine china and antique furniture of this well-traveled Hefner family, as well as a chapel and landscaped gardens. Today the mansion is owned by the Oklahoma Heritage Association. The mansion was the location of the Oklahoma Heritage House (Association) started in 1972, and then it moved to the building located on Classen Drive. It is still owned by the Oklahoma Heritage Association.
Image by Wesley Fryer on Flickr under Creative Commons License.
7

The mansion sits in the northern part of downtown Oklahoma City in the historic Heritage Hills neighborhood. This 3-storey Victorian-style building was the residence of Henry Overholser and his family. Henry Overholser was the leading figure in the history of the city and pioneering entrepreneur. Constructed at the beginning of the 19th century, Oklahoma City's first mansion possesses some expressive architectural features and representative interior fixtures. The Overholser Mansion Museum is one of the top tourist attractions. The indoor home tours present original furnishings, hand-painted canvas walls, Antwerp oak paneling, Axminster and Wilton carpets, stained glass and more.
Image by rutlo on Flickr under Creative Commons License.
8

This is a residence of the Oklahoma Heritage Association located at the corner of 13th Street and Shartel Avenue. The organization established in the 1920s has been housed in the majestic 1927 Neoclassical revival style building since 2006. The Association is a non-profit organization that is dedicated to preserve State Oklahoma original history. It operates the Gaylord-Pickens Oklahoma Heritage Museum and Hall of Fame, which resides in the same building. The Gaylord-Pickens Museum started in 2007, provides the well-equipped interactive expositions devoted to the history of the city and the State by highlighting the lives and activities of prominent Oklahomans. Museum hours: Tuesday through Friday: 9 a.m. to 5 p.m., Saturdays: 10 a.m. to 5:00 p.m.
Image by Wesley Fryer on Flickr under Creative Commons License.