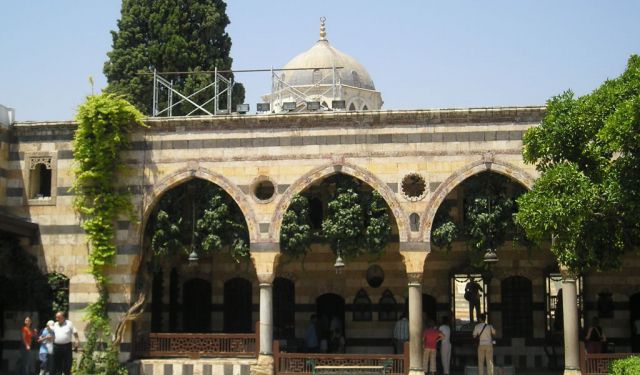 Image by Heretiq on Wikimedia under Creative Commons License.

Damascus is home to numerous cultural venues, including the outstanding Maktab Amber Museum, the Museum of Arts and Popular Traditions, the historic Shukri al-Quwatli House, Madrassa az-Zahariyya and the informative Nordin Old Hospital Museum. Take the following tour to visit the most fascinating cultural venues in Damascus!
How it works: Download the app "GPSmyCity: Walks in 1K+ Cities" from iTunes App Store or Google Play to your mobile phone or tablet. The app turns your mobile device into a personal tour guide and its built-in GPS navigation functions guide you from one tour stop to next. The app works offline, so no data plan is needed when traveling abroad.

Maktab Anbar, an old house near the Umayyad Mosque and the Street Called Straight, was built as a private residence by a local Jewish figure, Mr. Anbar, in the mid-19th century. Due to high costs, he abandoned the project in 1887. The Ottomans, who then occupied Syria, completed it, adding two wings and converting it into a boys' school. The house was restored by the Ministry of Culture in 1976. It now hosts a library, museum and craft workshops.
Image by Verity Cridland on Wikimedia under Creative Commons License.
Sight description based on wikipedia
2

Azm Palace is a palace in Damascus, which was originally built in 1750 as a residence for the Ottoman governor of Damascus As'ad Pasha al-Azm. The palace now houses the Museum of Arts and Popular Traditions.

The architecture is an excellent example of Damascene traditional houses. The structure itself consists of several buildings and two wings: the harem and the salamlik. The harem is the family wing, which was a private space for the residents (originally, the Azm family). This wing includes the kitchen, servant quarters, and the baths, which are a replica of the public baths in the city but on a smaller scale. The salamlik is the guest wing, and it comprises the formal halls, reception areas and large courtyards with traditional cascading fountains.

In 1925, the Azm palace was heavily damaged by French artillery during the Syrian revolution. It has since been restored and became a museum of arts and folk traditions. It received the Aga Khan Award for Architecture in 1983.

Image by krebsmaus07 on Wikimedia under Creative Commons License.
Sight description based on wikipedia
3

The Shukri al-Quwatli House is located near the magnificent Umayyad Mosque. It was the former residence of Shukri al-Quwatli, a well-known Syrian politician and former president, and is a good example of the city's beautiful architecture.
Image by Strider52 on Wikimedia under Creative Commons License.
4

Madrassa az-Zahariyya, located near the Umayyad Mosque, is a 13th century school, which was initially the residence of Saladin’s father. After the great sultan’s death, the building was converted into his mausoleum. Now it also houses a library and is decorated with a splendid mosaic.
Image by woutervv on Flickr under Creative Commons License.
5

Nordin Old Hospital Museum displays various exhibits related to medieval Arabic medicine. Here you will see a rich collection of medical instruments and pictures portraying a fascinating view of Syria’s past.
Image by TheRealHuldra on Wikimedia under Creative Commons License.