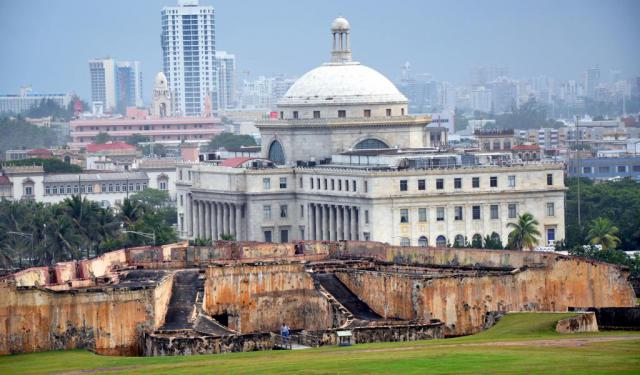 Image by Jorge Láscar from Australia on Wikimedia under Creative Commons License.

The east side of Old San Juan is home to several interesting historical sites, including Castillo de San Cristóbal, El Capitolio, Casa De España and Monumento de la Recordación. Take the following tour to discover the fascinating attractions located in Old San Juan’s east side!
How it works: Download the app "GPSmyCity: Walks in 1K+ Cities" from iTunes App Store or Google Play to your mobile phone or tablet. The app turns your mobile device into a personal tour guide and its built-in GPS navigation functions guide you from one tour stop to next. The app works offline, so no data plan is needed when traveling abroad.

Standing guard at the eastern gate, north of Plaza Colón, is an imposing 18th century fortress, called Castillo San Cristóbal. Contrary to her sister, El Morro, designed to protect from attacks by sea, the San Cristóbal guarded the city from enemy approaches by land, creating a crossfire with Del Morro over the bay. Meant to strengthen Spanish position in the face of imminent English and Dutch invasion, construction of the citadel began in 1634 on a hill originally known as Cerro de la Horca or Cerro del Quemadero. Later it was renamed Cerro de San Cristóbal in celebration of the Spanish victories ejecting English and Dutch interlopers from the island of this name in the Lesser Antilles, which was then part of the insular territorial glacis of Puerto Rico.

When finished in 1783, the Castillo San Cristóbal covered nearly 27 acres of land and practically wrapped around the whole of San Juan, with the entry to the city sealed by the San Cristóbal's double gates. After almost 100 years of relative peace, about a third of the fortification was demolished in 1897 to help ease the flow of traffic in and out of the walled city.

Why You Should Visit:
To see a) the largest fortification ever built by the Spanish in the New World, where the first shots of the Spanish-American War were fired; b) the historic weapons firing drill, cannons and real 200-pound mortar shells; c) the famous Garita (sentry boxes on the walls – a symbol of strength and national pride of Puerto Rico) where half a millennium ago Spanish soldiers stood watch; d) the artillery observation post built by the U.S. Army during World War II; e) to peer through cannon embrasures.
If you're a keen photographer, San Cristobal is a goldmine of panoramic views of the coast, from Old San Juan to Condado and beyond.

Tip:
Guided tours by local rangers visit the extensive tunnel system connecting various sections of the fort.
There is an exhibition of military clothing.
Be sure to visit the overlook for the Devil's Sentry Box or the "Garita del Diablo", from which, according to legends, soldiers mysteriously disappeared.
Tickets to San Cristobal or Del Morro can be used to enter either of the forts.


Image by Clueder on Wikimedia under Creative Commons License.
Sight description based on wikipedia
2

Plaza Colón is one of the most important squares in San Juan. Originally known as Plaza Santiago, back in the 17th century this square literally marked the doorstep to the old town. Encircled by stone walls in 1635-1641, the only way into the city was then through five gates, the centermost of which was Puerta de Santiago or Puerta de Tierra (the Land Gate), straddling the sole highway linking the walled San Juan islet to the rest of Puerto Rico by land.

By 1772 the urban tapestry of San Juan had become more or less apparent, and the open space adjacent to the city's most important doorway had taken the shape of Plaza Santiago, albeit still unpaved at that time and long afterwards. From 1862, several projects had been undertaken to refurbish the square until in 1870 it finally started to take its current shape; in 1890 the statue of Ponce de León was installed. The latter was replaced in 1893 by the statue of Christopher Columbus, to commemorate the 400th anniversary of the discovery of Puerto Rico, upon which the plaza was renamed Colón, or Columbus Square.

In 1897, under new urban development plan, the eastern portion of the city wall, along with the Puerta de San Juan, was demolished to allow further expansion of the city. In 1917, on the former site of the gate was built a casino, called the Antiguo Casino de Puerto Rico (the "Old Casino of Puerto Rico"). In the course of the 20th century it hosted some of the most ostentatious celebrations by Sanjuanera elite. Recently restored to its original splendor, this Beaux Arts building now operates as a social center of the Government of Puerto Rico for special events.

To the south of the plaza is another gem of Puerto Rican entertainment culture, the Teatro Tapia. Inaugurated in 1824, this lovely piece of neoclassical architecture was initially known as the San Juan Municipal Theater. Over the years, many notable performers have graced its stage, including the Russian ballerina Anna Pavlova. Outside the theater, along Calle Fortaleza, are a number of quaint restaurants and cute little cafes. Overlooking the square, in good weather, they are absolutely wonderful to sip some iced coffee outside whilst enjoying the sight of Plaza Colón, the symbol of progress and testament of new and old San Juan!
Image by Jorge Láscar on Wikimedia under Creative Commons License.
3

Maritime Museum, dedicated to Puerto Rico’s maritime history, contains various interesting exhibits, including maps, a wide collection of maritime tools (such as life rings) and other naval items. You will learn about the various countries and ships that have used the San Juan harbor. It gives a history lesson of Puerto Rico from an interesting angle. It is a small museum so it does not take much time to see it but it is well worth a visit if you are in the area.

The Haitian Gallery is a great place to find fine souvenirs, excellent gifts and original collectibles. This pleasant two-story shop offers vast array of items, including handmade chess sets, beautiful ceramic dolls, decorated photo albums, wooden sculptures and paintings. Price varies greatly depending on the item. If you looking to bring something home from San Juan, this place is worth a visit.

Casa de España is a beautiful historic building located on Ponce de León Avenue, near El Capitolio. Built in 1932 and designed by the famous Puerto Rican architect, Pedro de Castro, it serves as a private civic and cultural association dedicated to Puerto Rico’s Spanish heritage. Although it is named "Casa", it has never been a dwelling place for a family; rather it is a "house" whose members claim common ancestry. It was listed on the National Register of Historic Places in 1983. It is not open to the public, but that should not stop anyone from appreciating its beauty from the outside.
Image by JERRYE AND ROY KLOTZ MD on Wikimedia under Creative Commons License.
Sight description based on wikipedia
6

The Capitol of Puerto Rico is located on the Islet of San Juan just outside the walls of Old San Juan. The building is home to the bicameral Legislative Assembly, composed of the House of Representatives and Senate. Its architecture is reminiscent of the Capitol Building in Washington D.C. Construction began in 1921 and it was completed in 1929. Guided tours are available for touring the building.
Image by Brad Clinesmith on Wikimedia under Creative Commons License.
Sight description based on wikipedia
7

In front of the beautiful El Capitolio you will see Monumento de la Recordación. El Monumento de la Recordación is a memorial monument and monolith erected in San Juan, Puerto Rico that honors Puerto Ricans who have fallen in combat in service of the United States armed forces. The monument was unveiled on May 19, 1996 as a granite wall in semicircular shape engraved with the names of those Puerto Rican soldiers that have fallen in war. As of today the monument is etched with the names of more than 2,000 service members
Image by U.S. Air Force Photo/Tech. Sgt. Francisco V. Govea II) under Creative Commons License.
Sight description based on wikipedia