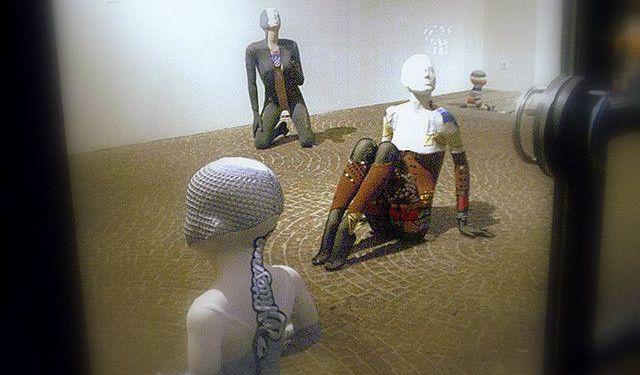 Image by Guerretto on Flickr under Creative Commons License.

Salzburg has many fascinating modern art museums and galleries with beautiful paintings and prints. Their charming interiors and pleasant atmosphere make for an unforgettable experience. Take this walking tour and explore the museums and galleries in Salzburg's Old Town.
How it works: Download the app "GPSmyCity: Walks in 1K+ Cities" from iTunes App Store or Google Play to your mobile phone or tablet. The app turns your mobile device into a personal tour guide and its built-in GPS navigation functions guide you from one tour stop to next. The app works offline, so no data plan is needed when traveling abroad.

In the past 25 years, the Gallery Salis has become one of the leading galleries exhibiting the art of the 20th century. It provides a wide range of the highest quality works from Impressionists, Expressionists, Neo-classical and Contemporary masters.
Image by René Spitz on Flickr under Creative Commons License.
2

The state-owned Residenzgalerie provides a cross-section of painting from the 16th to the 19th centuries. It bears similarities with the extensive painting collection of Prince-Archbishop Hieronymus Colloredo, which was exhibited during his era (late 18th century) in rooms that are now the Residenzgalerie. After 1800, however, this collection was repeatedly plundered during the French Wars. In the age of the monarchy, many of the works were transferred from Salzburg to Vienna.

The centerpiece of the Residenzgalerie is the Czernin Collection, initially on loan and then bought outright between 1980 and 1991. Its paintings by 17th-century artists are principally Dutch, but also Italian, Spanish and French. Assembled between 1800 and 1845, the collection's original owner was Count Johann Rudolf Czernin von und zu Chudenitz, who studied law in Salzburg and was related to Archbishop Hieronymus Colloredo. Also important are a number of works from the collection of Friedrich Karl, Count Schönborn-Buchheim (1674–1746), featuring mostly Dutch and Italian artists of the 17th century, which the gallery acquired on permanent loan in 1956.

Why You Should Visit:
Although quite small compared to other famous museums or galleries, the collection is very well curated.
The audio guided tour around the whole complex is very well organized and informative.
Each of the items not mentioned in the audio guide has an English explanation on the wall.


Image by Dan Bacalzo under Creative Commons License.
Sight description based on wikipedia
3

Housed in a historic 17th-century building, the Rupertinum Museum of Modern Art is one of the two galleries dedicated to modern art in Salzburg.

The Rupertinum is located in the historic city center of Salzburg. In 1633, a college for young priests was built over an earlier structure that existed from 1350. After the Archdiocesan rule of the city, it became a student dormitory until 1974. In 1983, the Rupertinum was converted to house one of the museums of modern art. It has a beautiful arcaded courtyard where visitors can rest and contemplate after viewing the artwork.

The museum was founded by Friedrich Welz and his friend Oskar Kokoschka. It holds temporary exhibitions of modern art and is also a repository of graphic art and 20th-century contemporary art. There is always a changing themed contemporary art exhibition at the venue. Permanent exhibits include works with paper, sculpture and photographs and works by contemporary artists like Klimt, Kokoschka and some lesser known modern artists. Besides the Museum of Modern Art, the Rupertinum also has a library, a restaurant, and a bookshop.

Tip:
Take the lift up, stroll around the museum then walk across the hillside to the Fortress.

Rudolf Budja Gallery, also known as Artmosphere Gallery, is located right next to the Festival Palais. The glorious rooms of this gallery exhibit modern and contemporary European and American art. It contains unique paintings, prints and photography desired by both collectors and casual art buyers.

Apart from the presentation of international works of art, the Museum der Moderne also serves as a platform for contemporary representatives of the Austrian art scene. Besides paintings and sculptures, the museum owns an extensive collection of graphics. A further focus of the collection is Austrian photography after 1945. Further, the museum manages the photographic collection of the Republic of Austria (Österreichische Fotogalerie) as well as the photographic collection 'Fotografis' of the Bank Austria as a permanent loan.

Why You Should Visit:
Fantastically located on the high part of Salzburg and fully in contrast with the Old Town below.
Inside there is a cool gift shop and you can enjoy drinks on the terrace in the afternoon sunlight.

Tip:
The museum can be reached by an elevator built into the mountain.
Both the lift and the museum entry are included in the Salzburg Card.