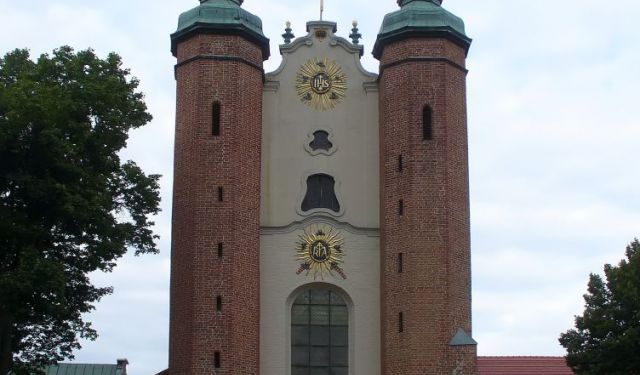 Image by Airwolf on Wikimedia under Creative Commons License.

Oliwa is an attractive place for tourists in Gdansk. Its main features are a cathedral, the New Abbots' Palace and a park. Gdansk Zoo is close to the historic center of Oliwa. With this self-guided tour you will enjoy this significant part of Gdansk that is worth a special visit:
How it works: Download the app "GPSmyCity: Walks in 1K+ Cities" from iTunes App Store or Google Play to your mobile phone or tablet. The app turns your mobile device into a personal tour guide and its built-in GPS navigation functions guide you from one tour stop to next. The app works offline, so no data plan is needed when traveling abroad.

Park Oliwski is a beautiful park in Oliwa town, Gdansk. It surrounds the Oliwa Cathedral and the Abbot's Palace. It consists of several parts. There is a Botanical Garden, palm houses, ponds and streams. You can see swans swimming and fish are close to the surface of the ponds in the park.
Image by Joymaster on Wikimedia under Creative Commons License.
2

2) The Abbots' Palace in Oliwa

The Abbots' Palace in Oliwa (Pałac Opatów w Oliwie) is a roccoco palace in Oliwa, a quarter of Gdańsk (Danzig). The first portion of the palace, the "Old Palace" was constructed in the 15th century. Later, in the first half of the sixteen hundreds a "New Palace" was added, which served as the residency of the then abbot of the Cistercians, Jan Grabiński. The final additions to the palace were made between 1754 and 1756, and were funded by another Cisterian abbot, Jacek Rybiński.

Since 1989 the palace contains the Department of Modern Art of the Polish National Museum in Gdańsk. In February 1990 a special gallery devoted to contemporary Polish art was established. Permanent exhibitions include works by Polish artists from 19th and 20th century (painting, sculpture and ceramics). Some of the artists whose works are on display include Zbigniew Pronaszko, Jan Cybis, Henryk Stażewski, Andrzej Wróblewski, Tadeusz Kantor, Jerzy Nowosielski, Alfred Lenica, Jan Lebenstein, Teresa Pągowska, Zdzisław Beksiński, Edward Dwurnik and Władysław Hasior. It also houses the "Promotional Gallery" which exhibits works by young artists.

Image by Diego Delso under Creative Commons License.
Sight description based on wikipedia
3

3) Ethnographic Museum at the Abbatial Granary

The Ethnographic Museum is part of the National Museum of Gdansk. It is housed in the eighteenth-century building of the Abbatial Granary. There, you may see artifacts, such as furniture, ceramics and textiles, belonging to various ethnic and cultural groups that once lived in Poland. There's also an old non-European exhibition that survived WWII and is currently presented at the museum.


Image by Krzysztof on Wikimedia under Creative Commons License.
4

Oliwa Cathedral is dedicated to The Holy Trinity, Blessed Virgin Mary and St Bernard. The archcathedral in Oliwa is a three-nave basilica with a transept and a multisided closed presbytery, finished with an ambulatory. The façade is flanked by two slender towers, 46-metres tall each with sharply-edged helmets. It is enlivened by a Baroque portal from 1688, as well as three windows of different sizes and three cartouches. The crossing of the naves is overlooked by a bell tower, a typical element of the Cistercian architecture. The cathedral is 17.7m high, 19m wide and 107m long (97.6m of the interior itself), which makes it the longest Cistercian church in the world. It holds works of art in Renaissance, Baroque, Rococo and Classical style of great artistic value.
Image by Klaus-Dieter Keller on Wikimedia under Creative Commons License.
Sight description based on wikipedia
5

Oliwa Zoo in Gdansk is listed amongst the largest zoos in Poland. It offers fun and education, and accommodates 220 animal species in beautiful, natural surroundings. Many of these animals are endangered. Here you can see deer, penguins, hippos, and Hungarian cattle (which look like bison). There's a mini-zoo, designed especially for children, that houses domestic animals. The zoo also has a bird exhibition.
Image by Mirek12 on Wikimedia under Creative Commons License.

Gdansk has a long history of Catholicism, hence the many impressive churches found in the city. In Gdansk you will see some of the most spectacular medieval religious sites, such as St. Mary's Church, St. Nicolas Church, and other churches that distinguish themselves as part of the urban landscape. Take this self-guided tour to discover the old historic churches of Gdansk:

Gdansk offers an exceptional shopping experience, especially because of its local treasure -- amber. Various things can be made from this gem: jewels and souvenirs are just a few. In the center of Gdansk you can drop into numerous amazing small shops. Take this self-guided tour to discover the following most popular shopping spots of Gdansk:

Gdansk is a very beautiful city in Poland, located on the seashore, that boasts beautiful old architecture. Its numerous museums are lodged in these majestic historic buildings. There are some museums that reflect the unique culture of this country, like, for instance, the Museum of Burgher Culture. This self-guided tour will lead you to the most famous museums of Gdansk.