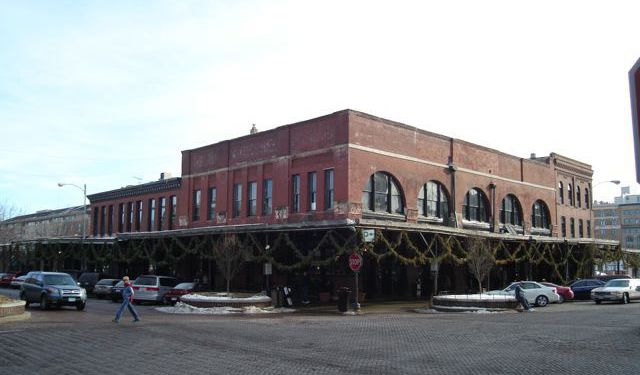 Image by David Burn on Flickr under Creative Commons License.

This is a second landmark tour in Omaha, which contains some more interesting places that are definitely worth seeing. One of the most interesting places to visit along this tour is the Heartland of America Park, so make sure to make the most of it.
How it works: Download the app "GPSmyCity: Walks in 1K+ Cities" from iTunes App Store or Google Play to your mobile phone or tablet. The app turns your mobile device into a personal tour guide and its built-in GPS navigation functions guide you from one tour stop to next. The app works offline, so no data plan is needed when traveling abroad.

The Christian Specht Building is located at 1110 Douglas Street in downtown Omaha. It is the only existing building with a cast iron facade known in Nebraska today, and one of the few ever built in the state. The building was deemed an Omaha landmark in 1981, and was listed on the National Register of Historic Places in 1977.

Designed by local architects Dufrene and Mendelssohn in 1884, the three-story Specht Building was modeled in the Italian Renaissance Revival Style. This was a popular style for cast-iron facade buildings. Christian Specht's company, the Western Cornice Works, manufactured the facade. The company was a manufacturer of galvanized iron cornices, finials and other metal building products.

The Bob Kerrey Pedestrian Bridge is a 3,000 ft (910 m) footbridge across the Missouri River between Council Bluffs, Iowa and Omaha, Nebraska. It opened on 28 September 2008. The bridge is named after former Nebraska Senator Bob Kerrey, who secured $18 million of federal funding for the bridge in 2000. The bridge was redesigned in 2004 after the lowest bid for the project was $44 million. In May 2006, a final cable-stayed bridge design by Kansas City engineering and architectural firm HNTB was selected for the bridge.

The bridge is north of the I-480 girder bridge and connects the Port of Omaha's Miller Landing to One Renaissance Center in the former Dodge Park Playland in Council Bluffs, making it the first ever pedestrian bridge to connect two states. The bridge lights include programmable controls that can display multiple colors in the large lights at the top of the towers and alter brightness and timing of the lights that run the entire length of the bridge.

Image by c r i s on Flickr under Creative Commons License.
Sight description based on wikipedia
3

The Burlington Headquarters Building, or Burlington Place, is located at 1002 Farnam Street. This four-story brick building was originally designed by Alfred R. Dufrene and built in 1879 next to Jobbers Canyon. It was redesigned by noted Omaha architect Thomas R. Kimball in 1899, and vacated by the railroad in 1966. The building was listed on the National Register of Historic Places in 1974, designated an Omaha Landmark in 1978, and rehabilitated in 1983. Today it is office space.

Designed in the Italianate style in 1879, the original three-story building was constructed with load-bearing masonry walls on a foundation of limestone blocks. A flat roof, straight front and walls, and very little embellishment originally made this building virtually indistinguishable from its neighbors in the Jobbers Canyon. The structure had fireproof vaults on each floor and each office was finished in oiled southern pine.

In 1899 Thomas R. Kimball was commissioned to remodel the building. His new plans closely resembled the Chicago, Burlington and Quincy Railroad Company Building in Chicago, Illinois. Gutting the building, he placed a central atrium and an open staircase with galleries overlooking a courtyard. An elevator lined with quartersawn oak resembled much of the building's new interior, which Kimball also designed. Features include a combination of skylights, cast iron railings, staircases, columns, and ornamental detailing.
Image by JonClee86 on Wikimedia under Creative Commons License.
Sight description based on wikipedia
4

The Nash Block, also known as the McKesson-Robbins Warehouse and currently as The Greenhouse, is located at 902-912 Farnam Street. Designed by Thomas R. Kimball and built in 1907, the building is the last remnant of Downtown Omaha's Jobbers Canyon. It was named an Omaha Landmark in 1978, and was listed on the National Register of Historic Places in 1985.

The Nash Block was composed of two identical warehouse buildings, built in 1905 for one of Omaha's wealthy elite, Catherine B. Nash. Thomas R. Kimball designed the building as the first factory-warehouse in Omaha with the modern fire protection elements, including brick enclosures for stairs and elevators, fireproof doors and an automatic sprinkler system. The two buildings' first occupants relied on the city's railroads, and the building's proximity to them. The building was later occupied for many years by the McKesson-Robbins Drug Company, and is still often referred to by that name. The northern-most building was razed to construct the Gene Leahy Mall and in 1989 the remaining building was renovated into apartment units known as "The Greenhouse."
Image by JonClee86 on Wikimedia under Creative Commons License.
Sight description based on wikipedia
5

The Anheuser-Busch Beer Depot is located at 1207-1215 Jones Street. Omaha architect Henry Voss designed the complex for the Anheuser-Busch Brewing Association of St. Louis, Missouri in 1887. Once covering more than a block, today the Anheuser-Busch Office Building is the only remaining structure of what was the original Krug Brewery, the largest brewery among Omaha's original "Big 4" brewers. Anheuser-Busch took over the facilities after buying Krug. The office building is one of the most elaborate examples of the Romanesque Revival style in Omaha. The Depot once included a stable, beer vault/ice house, famous gold basement and cobblestone alley.
Image by JonClee86 on Wikimedia under Creative Commons License.
Sight description based on wikipedia
6

The Burlington Train Station was built in 1898 by architect Thomas Rogers Kimball. The building was designed in the Italianate style. Burlington Station served Omaha longer than any other station in the city. Between 1929 and 1930 the station was remodeled in order to compete with the Union Station that was to be completed in 1931. The remodeling was done in Neo-Classical Revival style. Many decor elements were removed. In 1954 the station was again remodeled; a parking plaza and a circular drive were added near the station. In 1974 the station was closed and the same year it was included in the National Register of Historic Places. In 1984 the interior was destroyed by an architectural salvager who removed everything from the interior decor. In 2004 two investors bought the building in order to convert it to residential space, but in 2008 the project stopped and the building was abandoned.
Image by Tom Loftus on Wikimedia under Creative Commons License.
7

The Prague Hotel is located at 1402 South 13th Street on the southwest corner of South 13th and William Streets in the heart of the Little Bohemia neighborhood of Omaha. Designed by Joseph Guth and built in 1898, this building was listed on the National Register of Historic Places in 1987. In 1869, Vaclav Stepanek built the first Czech dance hall where Prague Hotel now stands.

Gottlieb Storz built the Prague Hotel in 1898, as a three-story brick building that provided Nebraska's Czech immigrants with familiarities in their new country. It was established in the city in the 1870s. For more than forty years it remained the only hotel catering to Bohemians between Chicago and the Pacific Coast. In 1987 the building was rehabilitated and converted into apartments. Local architectural firm Prochaska & Associates won awards for their renovation work on the building.
Image by Freechild on Wikimedia under Creative Commons License.
Sight description based on wikipedia
8

The Omaha Quartermaster Depot Historic District, including several brick structures built in Italianate and other styles, was built for the U.S. Army between 1881 and 1894. Located in South Omaha between Hickory and 22nd Streets, Woolworth Avenue and the Union Pacific main line, the Depot was listed on the National Register of Historic Places as a historic district in 1979. Today, the Depot is used as a U.S. Army Reserve facility.

In 1892, the Depot Commissary from Fort Leavenworth, Kansas, moved to Omaha. The U.S. Army's Department of the Platte used the Depot as a storage and distribution source for military outposts for twenty years, including its peak activity during World War I. During that period, the Depot supplied camps and National Guard units throughout the Midwest. During the Great Depression, the Depot was activated as part of Franklin D. Roosevelt's New Deal program as a supply base for Civilian Conservation Corps camps across the United States. Today, the district is occupied as a United States Army Reserve facility.
Image by Pat Dickey on Wikimedia under Creative Commons License.
Sight description based on wikipedia