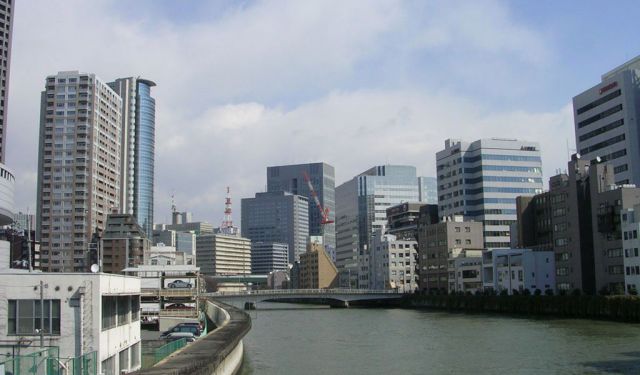 Image by Pramzan45 on Wikimedia under Creative Commons License.

Osaka is a very old city with a rich history that has bestowed it with a number of beautiful and interesting places. The city’s architecture is made up of a diverse combination of old structures and new buildings that are truly worth seeing. Take our Architecture walk to see the most interesting edifices in Osaka.
How it works: Download the app "GPSmyCity: Walks in 1K+ Cities" from iTunes App Store or Google Play to your mobile phone or tablet. The app turns your mobile device into a personal tour guide and its built-in GPS navigation functions guide you from one tour stop to next. The app works offline, so no data plan is needed when traveling abroad.

This modern structure in Osaka was initially built for housing the Meidiya Store. It was one of the first disaster proof modern buildings in Osaka.

The Meidi-ya Building was constructed for the Meidi-ya food retail company and was completed in 1924. It has a neo- renaissance style and was designed by the architecture firm Sone Chujo. It was the first structure in Osaka where lighting, ventilation and disaster prevention were taken into consideration when drawing up the plans. The Great Kanto Earthquake struck and damaged many buildings in the city one month after construction began. The far seeing contractor replaced the existing metal construction components with heavy duty disaster proof components manufactured by the US Company called Bethlehem Steel. When it opened its doors, it was one of the tallest buildings in Osaka with 7 floors.

When the building was inaugurated, the Meidi-ya Store occupied the first floor. It was Japan’s first retailer of imported food and liquor. Space in the 4th and 5th floors were leased to major offices and the 6th and 7th floors were occupied by Chuo Tei, a high end restaurant serving local delicacies and European cuisine. Today a convenience store called Lawson occupies the space where the Meidi-ya store was located. Lawson has served customers since the year 2006.

Image by Helmut Rec on Flickr under Creative Commons License.
2

The Mengyo Kaikan is a large building that stands as a monument to the flourishing textile spinning industry that revitalized Osaka after the Meiji Restoration. This industrial boom of the middle Meiji period gave the city the title, Manchester of the Orient.

The Mengyo Kaikan was designed by renowned architect, Setsu Watanabe. It was built as a club of the textile magnates in 1931. They contributed a sum of over 50,000 yen for its construction. The foundations were laid in 1931, the sixth year of the Meiji period. It was at the time, the symbol of modern Osaka. It also housed offices of textile companies and meeting spaces with the object of developing, promoting and improving the fast growing textile industry of Japan.

The Mengyo Kaikan building has a range of design styles from all over the world. Before World War II, it has welcomed many important state guests including Helen Keller, heads of State of many nations and the then American first lady, Eleanor Roosevelt. The building and the nearby guest quarters have been declared Important Cultural Properties. It survived the bombings of World War II without damage. The Mengyo Kaikan from its inauguration was and remains a membership based institution and is open to the public only on the 3rd Saturday of every month.

Image by NISHIGUCHI,Masahiro (Nisiguti) on Wikimedia under Creative Commons License.
3

The Osaka Gas Building is a distinctive landmark in the city with a black and white façade and curved walls. It was built to house the offices of the Osaka Gas Company and remains its headquarters till today.

The famous Gas Building Dining Room is located on the 8th floor. The restaurant and the building opened on the same day. It was the first restaurant serving western food in Osaka. The first chef came from the Imperial Hotel in Tokyo. The specialty of the restaurant is the Gas Building Curry and Hashed Rice. It was renovated in the year 2000 but the atmosphere of the restaurant was carefully preserved and its bar counter was left undisturbed. The first floor has a gallery displaying gas apparatus and a space for cookery demonstrations fitted with advanced gas equipment.
Image by J o on Wikimedia under Creative Commons License.
4

Located in the Kitahama Area of Osaka this beautiful structure is the headquarters of G. Ikoma and Company. It was designated as a Registered Tangible Cultural Property by the Agency for Cultural Affairs in 1997. Osaka City declared the structure as a Special View Formation in the year 2004.

The Ikoma Building was designed by architect, Heizo Zu. His other works work the Naniwa Bridge and the Kunijima Purification Plant. The structure has a modern art deco style and is an example of the early modern architecture of the Kitahama Area in Osaka. It was completed in the year 1930 at the cost of 150,000 Yen and was one of the most expensive constructions at the time.

The Ikoma Building has a unique clock tower with seven granite sculptures of eagles adorning its façade. Two eagle figures are above the entrance and the others are above the show windows. The Ikoma Building has large bay windows from the 3rd to the 5th floors. Circular windows above the bay windows are designed to resemble clocks. The interior has a grand staircase made of Italian marble and stained glass windows. There is also a restaurant in the building. Visitors can take tours around on weekdays between 9.00 am and 5.30 pm. The Ikoma building remains closed on weekends.
Image by ignis on Wikimedia under Creative Commons License.
5

The Tekijyuku School building is an example of the typical houses of merchants during the Edo Period. It was a school dedicated to Dutch Studies and had many eminent students.

The Tekijyuku School was founded by Dutch scholar and medical scientist, Ogata Kaon. He founded the school in a nearby building at first. He bought the Tekijyuku in 1845 to accommodate the increasing number of students who attended his school. It is located in an area called the Senba. At the time of founding, the school was surrounded by the homes of many prominent Osaka merchants. The neighborhood was almost wholly destroyed by bombings during World War II. Very few merchant houses including the Tekijyuku miraculously survived.

In its heyday the Tekijyuku was one of the most prominent schools in Japan. Sons of the Samurai warlords and medical scientists were sent here to study. Koan ran the school for 24 years between 1838 and 1862. He then went to Tokyo as a medical doctor for the ruling Shoguns. An important object in the school building is the study worn Dutch to Japanese dictionary which is displayed in the room called the Zuufu Beya or Room of the Zuufu Dictionary. The Tekijyuku is a declared Important National Cultural Asset and National Historic Site. Visitors can view the building on all days of the week except Mondays.
Image by Rekishi no Tabi on Flickr under Creative Commons License.
6

The Osaka Securities Exchange began during the Edo period as a Rice market called the Yodoya Komeichi. This was the first exchange in Japan. The Shogunate organized the market in 1730 and recognized the Cho Gomai or futures transactions in Japan. The modern stock exchange on western lines was established in Osaka in 1878. It was dissolved in 1947 after World War II and re-established in 1949.

The Osaka Securities exchange building was designed by Eikichi Hasebe. The large white structure has a cylinder shaped façade with columns. The interiors have beautiful stained glass windows. It was opened for trade in 1935. A new market building has been added in 1998 to facilitate trade in futures. On the first trading day which is also New Years Day, a ceremony takes place in the Securities Exchange Building where ladies dressed in traditional costumes clap hands simultaneously. This ritual is held in the lobby. Tours are organized for visitors and groups from Mondays to Fridays around the building. Admission is free for visitors.
Image by J o on Wikimedia under Creative Commons License.
7

The Kitahama Retro Building is a quaint structure inspired by buildings in Glasgow Scotland. Surrounded by large skyscrapers, this tiny building offers an old world beauty within the modern face of Osaka. Its location is opposite the Osaka Securities Exchange and in front of the Tasabori River and the Nakanoshima Park.

The Kitahama Retro Building was built in 1912. It was commissioned by a securities brokerage firm in the 45th year of the Meiji era. It was later bought by a wealthy businessman who was greatly impressed by the design of the building. It was declared as a Registered Tangible Cultural Property of Japan by the Agency of Cultural Affairs.

The Kitahama Retro Building today has two popular venues. The ground floor has a shop selling English cakes, tea and other commodities and the second floor has a typically English tea room. It has become a popular place where women and girls come to drink afternoon tea and enjoy snacks. The tea room serves an array of teas from England, France and India. The popular order here is the sandwich set that comes with a sandwich and a tea chosen by the customer from the range of choices on offer. The restaurant also serves freshly baked English cakes. It also offers beautiful views of the Nakanoshima Rose Garden.
Image by Bittercup on Wikimedia under Creative Commons License.