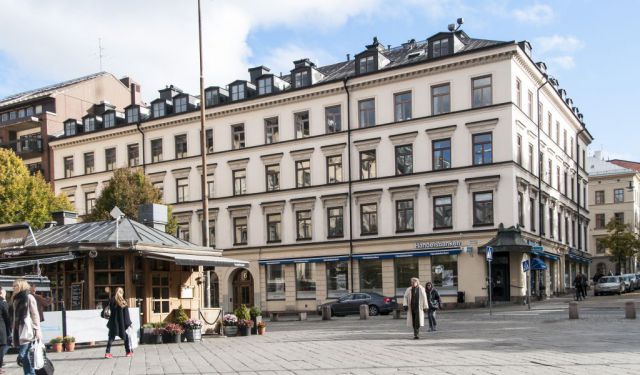 Image by I99pema on Wikimedia under Creative Commons License.

Östermalm is one of the most populous districts in Stockholm. An impressive number of official buildings, museums and higher public educational institutions are located in Östermalm. Take this tour to visit Musikmuseet, Swedish History Museum, Museum of Ethnography, several art galleries and many others.
How it works: Download the app "GPSmyCity: Walks in 1K+ Cities" from iTunes App Store or Google Play to your mobile phone or tablet. The app turns your mobile device into a personal tour guide and its built-in GPS navigation functions guide you from one tour stop to next. The app works offline, so no data plan is needed when traveling abroad.

The Swedish Army Museum traces Swedish military history from the earliest times of the Vikings to present day Sweden. Housed in a 17th-century artillery arsenal, the museum celebrates Swedish military history. Visitors to the museum will be impressed by its wide-ranging display of trophies, uniforms, flags, and weapons. The museum is also well-known for its realistic reproduction of the great battles in Scandinavian history, with life-size models of soldiers dressed in genuine military regalia.

In addition to its manikin-filled rooms, the museum also has rooms devoted to military history. The Mercenary Room focuses on the history of Swedish mercenaries and includes the tools of these professional soldiers. The Animals of War Exhibit focuses on the four-legged warriors who fought courageously alongside their two-legged companions. The Crime and Punishment Room tells the tale of some of the most infamous military villains, while the Weapons Room has an extensive exhibit of the tools of war. The Trophy Chamber holds a wide variety of items from captured flags to musical instruments and, everything imaginable which was collected following battles.

Why You Should Visit:
Spectacularly documented. Natural-size recreations. Many models and explanations. Lots of multimedia content. Café and gift shop. Free entry. It's worth it.

Tip:
You can access the free audio guide by downloading an app called A Guided Tour.


Image by Peter Isotalo on Wikimedia under Creative Commons License.
Sight description based on wikipedia
2

With over 10 million artifacts in its collection, the Swedish History Museum focuses on archeological finds and Swedish Religious art. Visitors to the museum will take a voyage through time from prehistoric times through the present day. The museum has a distinctive way of displaying objects by presenting them in vignettes, which tell stories and encourage visitors to become a part of the display. The Viking display is one of the most extensive in the museum, including over 4,000 artifacts which include an actual reproduction of a Viking town, and items from Viking culture based on social classifications.

The prominent Gold Room is an awe-inspiring display of the riches of Scandinavia’s Golden Age and, the Textile Chamber is a magnificent display of the many textile treasures from medieval times. The museum also has one of the broadest collections of Northern European Ecclesiastical art in the world, which includes triptychs, golden chalices and elaborate baptismal fonts that date back to the 12th century. The museum works in partnership with other museums throughout the world, sharing pieces from its collections.

Tip:
In order to attend a (free) guided tour, you need to come to the info desk and ask for a free ticket for the nearest time (or check online).
During the summer months, there are guided tours, games and activities in the courtyard as well.
Note that the Viking exhibition is temporarily closed. A brand new one will open spring 2020.

Stockholm’s Maritime Museum is a unique museum with panoramic views of the city’s harbor. Guests will enjoy exploring both the exterior and the interior of this unique museum which is focused on a nautical premise. Designed by the architect, Ragnar Östberg, who also designed Stockholm’s City Hall, the museum was first opened in the 1930s and, is a good example of the neoclassic style of architecture. Prior to entering the museum, visitors are greeted by the statue known as “The Sailor,” which pays homage to the Swedish sailors who were lost at sea during World War II. On the ground level, visitors will uncover detailed exhibits which focus on 18th century ships and Swedish naval history. The basement houses the actual cabin and stern of one of King Gustav III’s ships, “the Amphion.” This is the very cabin where the king planned an attack on Russia during the 18th century. Visitors will be taken on a trip back in time to an era where most of the world’s travel took place on the water. The top floor of the museum focuses on the Swedish commercial shipping industry. The museum’s collections include models of actual maritime vessels, uniforms, paintings, weapons, photographs and drawings and the maritime library itself is one of the largest worldwide.

Operation hours: Tuesday - Sunday: 10 am - 5 pm
Image by Holger.Ellgaard on Wikimedia under Creative Commons License.
Sight description based on wikipedia
4

4) Swedish National Museum of Science and Technology (must see)

The Swedish National Museum of Science and Technology (Swedish: 'Tekniska museet') is responsible for preserving the Swedish cultural heritage related to technological and industrial history. Founded in 1924, the museum holds a collection which includes over 200,000 drawings, 50,000 objects and artifacts, 50,000 books and 620,000 images. Its present building is designed in the functionalistic style and was opened in 1936. The museum is well designed and laid out and has an excellent restaurant as well.

Tip:
If you have pre-teen kids, then go for it! Everything is adapted to them and quite interactive.
You could skip the first room and go straight to the one with all the games for kids & adults.

Located in Stockholm, Sweden, the Museum of Ethnography celebrates science. The museum is said to hold a collection which includes over 200,000 artifacts that outline the anthropological history of the people of the world. The items in the museum were acquired from the collection of its founder, the explorer Sven Hedin. Upon his death in 1952, Sven Hedin’s entire estate was willed to the city of Stockholm for the museum. The main portion of the collection is connected to Hedin’s exploration of Central Asia including Persia, China, Tibet and Mongolia. Many items from the museum have been lent out to other ethnographically focused museums throughout the world. The museum holds many newspapers, photographs, maps, filmstrips, drawings and personal once owned Hedin. Because Hedin’s collection was so extensive, the portion of his collection which could not be held by the museum is housed in the Stockholm City Archives. The museum, however, is not without controversy. Because Hedin collected so many anthropological artifacts from throughout the world, there has been some debate tied to their rightful ownership, which has resulted in the museum returning some the artifacts to their native homes following research, archival and investigation. In these cases, visitors and researchers will find reports on findings along with photographs to document the items.

Operation hours: Tuesday - Sunday: 11 am - 5 pm; Wednesday: 11 am - 8 pm
Image by Holger.Ellgaard on Wikimedia under Creative Commons License.
Sight description based on wikipedia

Gamla stan (The Old Town) is the oldest part of Stockholm, officially known until 1980 as “The Town Between Bridges” (Staden mellan broarna). Established in the 13th century, the area abounds in medieval alleyways, cobbled streets, and archaic architecture, showing a great deal of North German influence. Among the many places of interest found here are The Stockholm Stock Exchange (built...  view more

Once an independent city, Norrmalm has been a part of Stockholm (one of its central areas, these days) since 1635. Many of Norrmalm's old buildings were torn down during the 1950s-60s to clear space for modern construction. Still, the most notable pieces of local architecture are in place and reveal a wide range of styles - Late Gothic, Renaissance, Baroque. The district is a home to The...  view more

Riddarholmen, a small island that is part of Gamla Stan, houses several beautiful historical buildings dating back to the 17th century. Its most important landmark is Riddarholmen Church, the burial place of Swedish monarchs. The Old Riksdag Building is also located here. The western side of the island offers a spectacular view of the bay, Riddarfjärden. Discover Riddarholmen’s historical...  view more