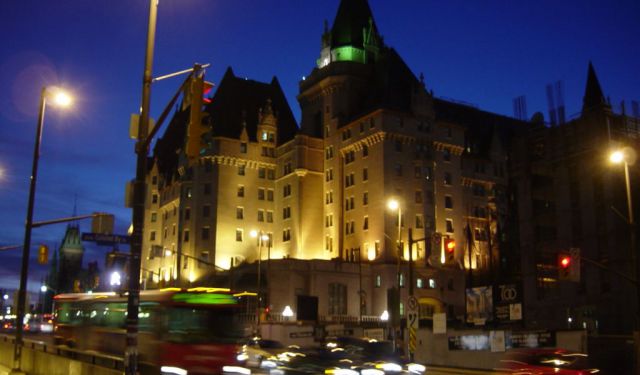 Ottawa, the northern capital of Canada, is famous not only for its art galleries and museums, but also for its dark past. There are several buildings in this city that the locals prefer to walk around. These buildings, it is said, are inhabited by real, horrifying ghosts. Dare you take this walking tour through Ottawa’s haunted places when the darkness falls.
Image Courtesy of Wikimedia and Siqbal.
How it works: Download the app "GPSmyCity: Walks in 1K+ Cities" from iTunes App Store or Google Play to your mobile phone or tablet. The app turns your mobile device into a personal tour guide and its built-in GPS navigation functions guide you from one tour stop to next. The app works offline, so no data plan is needed when traveling abroad.

Located just below the Parliament Hill, the Bytown Museum is a small museum in Ottawa. Accommodated in the city's oldest stone building, it contains more than 7,000 artifacts. The museum collections narrate the story of the Canadian capital and its citizens, from ancient Bytown to present day Ottawa, with a special emphasis on the construction of the Rideau Canal.

The Bytown Museum is dedicated to hosting programs designed to help local and foreign visitors to learn more about the rich culture and history of Ottawa. Pursuant to this objective, the museum gathers, stores, studies and maintains artifacts representative of the culture and heritage of the city.

In order to enable a foreign visitor to fully appreciate the history of Canada, audio tours of the museum have been made available in 6 different languages: English, Spanish, French, Japanese, Mandarin and German.

*** Ottawa Haunted Walking Tour ***
The Bytown Museum is also one of Canada’s most haunted sites, notorious for eerie experiences such as the sound of phantom footsteps following workers and visitors, rattling doors, and creepy porcelain dolls reportedly crying or winking at people or even following them with their eyes. There are also numerous claims of the walls weeping tears, the items moving freely, or the strange occurrences with orbs of light flashing in rooms.

There are also talks of unfriendly ghosts pushing and poking visitors. The most well-known of them is rumored to be General Duncan McNab who used to be a supply manager and died during the construction of the Rideau Canal. The other one is Lieutenant-Colonel John By, an engineer who supervised the Canal construction.

Others believe that the ghosts may be the hundreds of Irish workers who died from illness, exhaustion and hunger whilst digging the Canal; their bodies were often disposed of freely without much ceremony and burial rituals.

Why You Should Visit:
Does a great job of explaining the construction of the Rideau Canal and the establishment of the settlement of Ottawa.
Is located just below the locks and has a small area selling sandwiches/drinks so if you wish you can have lunch sitting outside and watching the locks being operated – very pleasant.

Tip:
Take advantage of the audio tour included in the admission price – it's definitely worth it.


Image Courtesy of Wikimedia and SimonP.
Sight description based on Wikipedia.
2

The Chateau Laurier Ottawa is one of the key attractions in the city. Designed in the Châteauesque style, this historic and stylish hotel stands at the intersection of Rideau Street and Sussex Drive. The Château was built between 1909 and 1912. Originally, it was planned to occupy part of the land belonging to Major’s Hill Park. However, that decision caused controversy and the then Prime Minister of Canada, Wilfrid Laurier, had to step in and assist in finding an alternate place for the project. In appreciation of his efforts, the newly built hotel was named Laurier.

Initially, the hotel's opening was scheduled for 26 April 1912 and was to be attended by Charles Melville Hays, president of the Grand Trunk Pacific Railway whose construction company ran the project. Hays was returning from Europe to Canada for the opening ceremony on RMS Titanic and tragically died when the boat sank on her maiden voyage on April 15. The ceremony was, thus, delayed and took place two months later in the presence of Sir Wilfrid Laurier.

After the inclusion of Grand Trunk in the Canadian National Railway, the Château Laurier was designated as the most significant hotel in Ottawa and hosted heads of states, celebrities, royalties, and political personalities. Canadian Prime Minister R.B. Bennett also lived here from 1930 to 1935. In 1999, the hotel's name was changed to Fairmont Hotels and Resorts.

The place is said to be haunted as many guests have admitted to seeing here the ghosts of Charles Melville Hays and a small child. They also claimed to have heard supernatural voices, experienced unexplained shivering and even had the sensation of being watched whilst on the premises.

The Royal Architectural Institute of Canada has put the hotel among the top 500 buildings constructed in the country over the past millennium. It is also known as "the third chamber of Parliament" for having housed many important meetings of prominent politicians and other famous personalities, and also due to its proximity to some of Ottawa's major sites, including the National Gallery of Canada, the Rideau Canal, the Parliament Hill and others.
Image Courtesy of Wikimedia and Jcart1534.
3

Located at Nicholas Street, between Wilbrod Road and Laurier Avenue East, Carleton County Gaol (jail) was the first penitentiary facility built in the Ottawa area. This three-and-a-half-storey building, featuring Italianate style, was architected by Henry Horsey and finished in 1862.

After being a prison for almost one and half centuries, it now houses a youth hostel. The building is renowned for its historical, architectural and contextual value, and serves as a live illustration of what the local prison system was like in those days. Carleton County Gaol is situated near many important buildings of the city, such as Carleton County Courthouse.

Throughout its history, the jail had held perpetrators of all stripes – from small time offenders to brutal murderers. The most prominent of Carleton's inmates was Patrick Whelan, who in 1869 was hanged here to death for killing Thomas D'Arcy McGee. This was the last public execution performed in Canada and was witnessed by more than 5,000 people.

In 2002, The Ottawa International Hostel was renamed The Ottawa Jail Hostel and designated a historic landmark. Although converted into a hostel, after renovation some of the cells were preserved in their original state so that the visitors could see the gruesome conditions in which the prisoners had been kept.

The Carleton County Gaol is notorious as one of the ghostliest sites in Canada, reportedly for having had too many innocent souls locked inside and held in appalling conditions (without bath or daylight, and with only one meal a day). Some of these people were tortured to death; others, in solitary confinement known as "The Hole", were stripped naked, chained to the walls and left in complete darkness. After the jail's closure in 1972, a number of reports have come in about unexplainable happenings and supernatural activity observed in the building. One such occurrence was the ghostly presence of a little girl and an old man witnessed by several people.

As soon as you enter the building, you can't help feeling a deep sense of sadness, gloominess and distress. Whilst in here, prepare to be scared by some of the horror stories told by the guides about haunting incidents that have taken place in this former jailhouse. By all means, visiting Ottawa's premium jail is an unforgettable experience which one definitely must have, provided the one is not fainthearted.
Image Courtesy of Wikimedia and Jeff Johnston.
4

Friday's Roast Beef House, besides being a nice restaurant, is haunted by Sir James Alexander Grant, the building’s former owner. This doctor was famous for his eccentric behavior. The paranormal activities began when Friday’s Roast Beef House opened in 1972. The restaurant staff said they were hearing heavy breathing and coughing, coming apparently from an asthmatic person. Well, Alexander Grant suffered from asthma.
Image Courtesy of Flickr and bluesmoon.
5

The Ottawa Normal School is today part of Ottawa City Hall. It was built in 1874 and served as a private school in the 1900s. However, the janitors repeatedly reported strange events happening at night - temperature falling below freezing levels, unusual figures materializing. Some say the paranormal activity was one of the main reasons the school had to close.
Image Courtesy of Wikimedia and SimonP.
6

Lisgar Collegiate Institute is an Ottawa-Carleton District School Board secondary school in Ottawa.

Lisgar Collegiate Institute, one of the country's best regarded public schools, is located in downtown Ottawa by the Rideau Canal and is only a few blocks from Canada's Parliament Hill. The school serves the neighbourhoods of Sandy Hill, New Edinburgh, Centretown, and Rockcliffe Park, and has many students transferring from other areas, attracted by the school's reputation and prestige.

But the Lisgar Collegiate Institute is one of the creepy buildings in town. If you take a look at the dusty windows from the upper floor you will notice that there are no classrooms. The top floor is used for storage only, because everybody is scared of going there alone. This area was closed, some years ago, for staff and students due to the paranormal activities observed there.
Image Courtesy of Wikimedia and Peregrine981.
Sight description based on Wikipedia.

The architecture of Ottawa – formalistic and functional, for the most part – is marked by the city's role as the national capital of Canada. It represents a mix of different styles, varying considerably based on the era of construction of any particular object. Here, amid the monumental structures designed to represent the federal authority, there is an array of buildings featuring...  view more

As a cultural city, Ottawa abounds in monuments and statues of various sorts. They are so many, in fact, that the locals jokingly claim to have got so used to them that they hardly notice them at all. As a guest of the Canadian capital, you may want to embark on a hunt for the soul of Ottawa and hear the stories set in stone and bronze, reflecting the eventful past and colorful present of the...  view more

Ottawa is home to a large number of excellent galleries that offer something to all art lovers. Be it a small family-owned gallery or a large national institution, each of them is illustrative of the Canadian art and its evolution. Presented here is a list of best art galleries in downtown Ottawa for your enjoyment. Take this self-guided walking tour to explore and discover the art pieces that the...  view more

The name Ottawa comes from the Algonquin word for trade. It is an appropriate name for the Ottawa River, which was once the primary trade route for Eastern Canada. The capital of Canada gets its name from this river due to its location. Resting on the banks of the Ottawa River, Ottawa is a political and cultural city that also offers outdoor activities and beautiful natural sights.