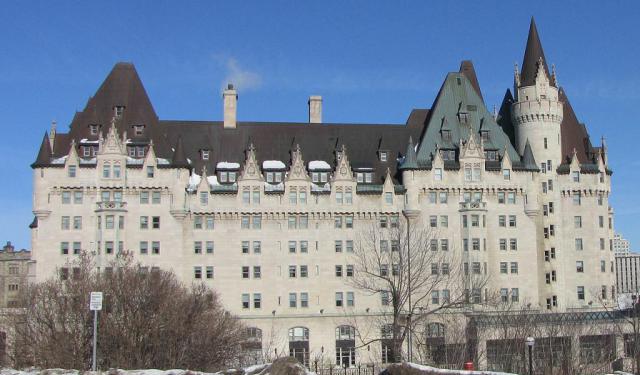 Image by Johnmuggleton on Wikimedia under Creative Commons License.

Ottawa has plenty of theaters and art organizations. Ready to satisfy any taste and mood, you can find venues which stage plays ranging from traditional Canadian to International to more exotic and extravagant. Take a tour through some of the most popular theaters in Ottawa.
How it works: Download the app "GPSmyCity: Walks in 1K+ Cities" from iTunes App Store or Google Play to your mobile phone or tablet. The app turns your mobile device into a personal tour guide and its built-in GPS navigation functions guide you from one tour stop to next. The app works offline, so no data plan is needed when traveling abroad.

Opened in 1913, Ottawa Little Theater is a non-profit community theater. It has a 480-seat hall and is famous for its high quality plays with its group of volunteer actors. It runs 8 productions per season and one musical during the summer. A good place to spend some time together with family and friends.
Image by Johnmuggleton on Wikimedia under Creative Commons License.
2

The Ottawa Symphony Orchestra is a full size orchestra in Ottawa including professional, student and amateur musicians. With around 100 musicians, the OSO is Ottawa's largest orchestra, which allows it to perform large symphonic repertoire of the 19th and 20th centuries, including works by Canadian composers. The OSO's Mission Statement is "to enrich the life of the community through, and to foster public appreciation for and interest in, symphonic music." OSO activities such as its concert series, educational outreach activities, and its mentorship program help to support this mission statement. The OSO has three educational programmes: a mentorship programme for young musicians, the Symphony for Schools concert series in local elementary schools and the Students at the Symphony programme of complimentary tickets for high school students.
Image by Artotem on Flickr under Creative Commons License.
Sight description based on wikipedia
3

Opened in 1986, Odyssey Theatre entertains audiences with dance, clowns, puppetry and pageantry. Located in Strathcona Park, it is also a center for art performances and plays from all over the world. Let yourself and your kids be enticed into the magical world of theater.
Image by Steffen Kørner Ludvigsen on Flickr under Creative Commons License.
4

Opera Lyra from Ottawa was opened by Diana Gilchrist in 1984. It presents two productions each year, one opera and a number of smaller events. It also has special programs for the younger generation and families with the help of which it tries to nurture the love of art.
Image by Alpha six on Flickr under Creative Commons License.
5

The Arts Court represents one of the best creative groups in Ottawa. It includes the Ottawa Art Gallery, the Arts Court Theater, Le Groupe Dance Lab, SAW Video, and many more groups. Located in a historic building in the center of the city, it delights visitors with constantly evolving plays of a broad variety. Hours of Operation: 9 am to 11 pm, Monday to Sunday.
Image by CoffeeShopNomad on Flickr under Creative Commons License.
6

Situated between Elgin Street and the Rideau Canal, The National Arts Centre (NAC) is a centre for performing arts in Ottawa. It is housed in a hexagonal building that is joined by roof with the Mackenzie King Bridge and was designed by Fred Lebensold.

The National Arts Centre (NAC) showed its first performance in 1969. Masterminded by Canadian Parliament as a centennial project back in the 1960s, the centre has evolved as the country's leading stage for the performing arts. It is also the largest performing arts centre in the world and the only one that performs in two languages. In 2006, the National Arts Centre was declared a National Historic Site.

The NAC orchestra is also quite famous, both at home and abroad. It is directed by Pinchas Zukerman and, apart from performing, continuously seeks new talents with an aim to further develop their abilities in the performing sphere. Talented musicians are offered guidance and plenty of opportunities to perform in numerous programs run by the NAC Orchestra.

During the year many Canadian and international artists come to the NAC to show off their skills: in dance, music, theatre and many other areas. Nutcracker is one of the NAC internationally acclaimed performances, featuring both national and international ballet dancers. The diversity of the NAC annual programs suffices to satisfy any art lover.

Vast spaces of land outside the centre are covered by gardens which are open to the public. Many works of arts are displayed at the NAC entrance and staircases.

When in Ottawa, make sure to spare some time and visit the NAC, and you will certainly find there something to suit your taste.

Why You Should Visit:
Exceptional stage & wardrobe crew, amazing orchestra, huge underground parking, central location along with reasonable rates make this a hot spot in Ottawa.


Image by Sensinct on Flickr under Creative Commons License.

Being the cultural heart of Canada, Ottawa is home to a wealth of museums and heritage structures. Ottawa's museums are part of the Confederation Boulevard ceremonial route and cover a broad range of art-focused, family-friendly and historical exhibits. We invite you to take a walking tour through Ottawa's most famous museums

Ottawa the capital of Canada is located in the Province of Ontario. Being the fourth largest city in the country it boasts a large number of memorials, historical buildings and quite a few museums. Its mild weather will definitely cheer you up and keep you busy. Here is a list of the best tourist attractions you should check while in Ottawa.

The capital of Canada, Ottawa is a major international hub with a diverse set of cultural influences. For the entertainment of both its locals and guests to the city, Ottawa offers a range of great drinking establishments, as well as plenty of hardy food to go along with it. Take this Ottawa Bars and Pubs Tour and discover the friendly faces and great entertainment Canada’s capital city has to...  view more

Ottawa, the northern capital of Canada, is famous not only for its art galleries and museums, but also for its dark past. There are several buildings in this city that the locals prefer to walk around. These buildings, it is said, are inhabited by real, horrifying ghosts. Dare you take this walking tour through Ottawa’s haunted places when the darkness falls.

Ottawa is home to a large number of great galleries and offers something to everyone. You'll discover a plethora of masterpieces of sculptures and paintings from ancient times to the present. Whether they be small family-owned galleries or large national galleries, they teach you more about Native Canadian art and its evolution. Be sure to take a walking tour through Ottawa's famous...  view more