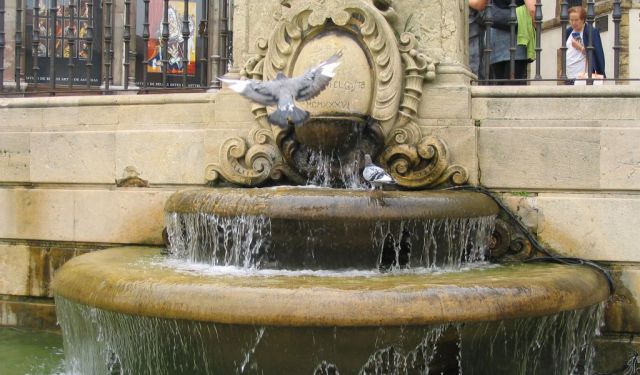 Image by mocvdleung on Flickr under Creative Commons License.

Oviedo city is home to many beautiful buildings and monuments, but some of them are especially meaningful, due to their role in the historical and cultural development of the region. This two-hour tour will show you the most significant landmarks on the northern side of Oviedo.
How it works: Download the app "GPSmyCity: Walks in 1K+ Cities" from iTunes App Store or Google Play to your mobile phone or tablet. The app turns your mobile device into a personal tour guide and its built-in GPS navigation functions guide you from one tour stop to next. The app works offline, so no data plan is needed when traveling abroad.

San Julián de los Prados, also known as Santullano, is a Pre-Ramirense church, dating back to the beginning of the 9th century. It is one of the greatest works of Asturian art and was declared a Historic Monument by the Spanish Ministry of Culture in June, 1917 and a World Heritage Site by UNESCO on the 2nd of December, 1998. The church's construction was ordered by Alfonso II of Asturias and it was built by the court architect Tioda around 830. It is dedicated to the martyred Egyptian saints Julian and Basilissa.

The spacious church clearly displays the characteristics of its style. It is of basilica plan with a nave and two aisles separated by square piers which support semi-circular arches and with a transept of impressive height. The iconostasis, that separates the sanctuary from the rest of the church is remarkably similar in appearance to a triumphal arch. The size and originality of the church stands out and distinguishes it from works of Visigothic art. However, without doubt, that which most attracts attention to this church is the pictorial decoration, with aniconic frescoes (stucco, very well executed), painted in three layers, with architectural decoration that bears clear Roman influences. Although it appears more a monastic rather than a royal church, a gallery was reserved for the king in the transept. Of the three original entrances to the church, two have been filled in.

The only sculptural decoration that has survived to the present day is that of the marble capitals on which rest the semi-circular arches. There are also two marble flagstones with hexagonal geometric figures and floral motives that are found in the central chapel. The pictorial decoration is the most important element that can be seen in the church. It is without doubt the most important of its time, in its extent and conservation as much as in the variety of icons represented, in all of Western Europe.

Image by Jaume Meneses on Wikimedia under Creative Commons License.
Sight description based on wikipedia
2

Parroquia de San José de Pumarin was established in 1957. The church was built in neoclassical style. It is located on Calle de Joaquina Bobela, in the northern part of the city of Oviedo. The church building was designed in white and coral colors, with pure, straight lines, emphasizing the structure's sublimity. The semicircular facade of the Parroquia de San José de Pumarin is an obvious characteristic of Neo-architectural style. The distinctive feature of the facade is the oval window, designed with a white pattern, highlighting the cross on its background.
Image by Arne Hulstein on Flickr under Creative Commons License.
3

The Foncalada is a fountain of potable water located outside of the city walls of Oviedo. It was built by king Alfonso III of Asturias in the 9th century. This building remains the only surviving civil architectural item for public use of the High Middle Ages. Its name was given after the inscription in Latin: “fontem calatam”. Built in Pre-Romanesque style, it is included in the UNESCO World Heritage Site list since 1998. It was originally placed near the city walls, next to an ancient Roman road. The decoration on top depicts the Victory Cross, symbol of Asturias. This public fountain is erected over a spring. The source is a rectangle of about 4 meters (13 ft) wide. It has a shape of a vaulted chapel. Below the Asturian Cross, two inscriptions remain: “With this sign the pious are protected, With this sign you shall defeat the enemy”; “Lord, put the sign of the salvation on this fountain to not allow hitting angel to enter”.
Image by Jaume Meneses on Flickr under Creative Commons License.
Sight description based on wikipedia
4

Iglesia del Sagrado Corazón (Church of the Sacred Heart of Jesus) is located at the center of a shopping street, Nueve de Mayo (9th of May). In 1881, the church used to be the part of Visitación de Santa María Order. In the 1970s, the convent and adjoining courtyard were demolished in order to build a modern shopping mall (The Salesians). The community was moved to a new building located in Naranco. The temple itself was saved from demolition due to its high cultural and architectural value. The church building was designed by Francisco Aparic and Juan Miguel de la Guardia in Neo-Gothic style, with a Latin cross in its basement. One of the temple's most curious features is the tower, which appears to “grow” from the center of the facade and rises above the structure as a pentagonal, narrow arrow.
Image by Adrian1205 on Flickr under Creative Commons License.
5

Casas del Cuito is an impressive Art Nouveau architectural structure. The building was raised on the Calle de Uría in the first third of the 20th century by Ulpiano Muñoz. Its facade is decorated with mythological motifs, maintained till the present day. Against the background of the neighboring buildings, Casas del Cuito looks like fine lace made of white stone.
Image by Buron444 under Creative Commons License.
6

Iglesia de Las Siervas de Jesús is a small church, located on Calle de Uría. It was designed in neo-Gothic style by Javier Aguirre. The church features such details as floral ornamentation and lancet arches, as well as small rose windows, typical of Gothic architectural style. The humble entrance is crowned by a steeple with a cross and bell.
Image by Gonmi on Flickr under Creative Commons License.
7

Antiguo Hospicio de Oviedo was constructed in 1752 by decree of Isidoro Gil de Jaz, head of the Asturias Principality. The works were planned and supervised by the Spanish architect Antonio Pedro Menendez de Ambás. The building aimed to be a local hospital and was rather large for its time. Its facade consists of 7 symmetrical arches and is crowed by a big shield. In 1942, the building was restored by the provincial government. Since then, Antiguo Hospicio de Oviedo has been home to a five-star hotel called “Hotel de la Reconquista”.
Image by alepheli on Flickr under Creative Commons License.
8

Plaza de España houses a beautiful composition of three statues, called Monumento a Francisco Franco, Spanish general, the leader of the Nationalist military rebellion during the Spanish Civil War. The monument consists of two lateral sculptures and a central one. The lateral figures represent Neptune sitting of the dolphin's back and Apollo looking at the sun. The central figure depicts the Greek Goddess, Hera, proudly facing her future. The curious thing about this composition is its actual dedication. Spain, during its long history, has gone through very difficult years of fascist regime. And Francisco Franco used to be one of the fascist leaders. In 2007, the Spanish government passed the Historical Memory Law, officially condemning the fascist regime. This law implied honoring victims from both sides, but removing all the Francoist symbols and statues from public areas. That's why it is very surprising to see the portrait and the name of Francisco Franco on the column Hera Goddess is standing on.
Image by Gomni on Flickr under Creative Commons License.
9

Campo de San Francisco is located in the center of Oviedo and represents one of the most significant landmarks in the city. It stretches across 9 ha (90000 square meters) and houses a Botanical Garden, Snail Fountain, Duck Pond, Music Kiosk, and many beautiful statues and monuments. Historic documents from the 15th century describe Campo de San Francisco as a place frequently visited by people. It was also used as grounds for military training. In the 19th century, the park's present day borders were decided, being bound to the center of the city by Santa Cruz, Santa Susana and Uria Toreno street. Campo de San Francisco is often called the “lungs of the city” and is much loved and valued by Oviedo's citizens.
Image by amaianos on Flickr under Creative Commons License.