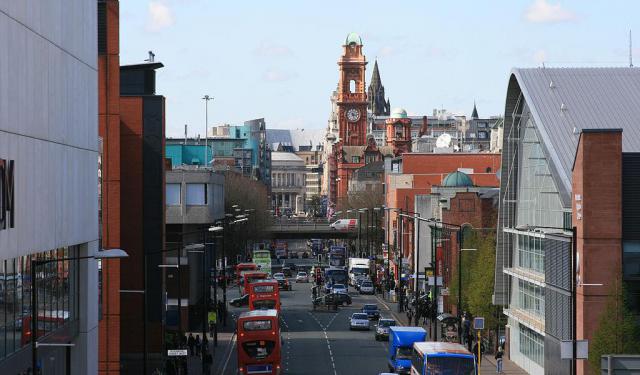 One of the main avenues of Manchester is Oxford Road. Locals and tourists find the area equally attractive as it features some of the city's main culture and higher education institutions like the Manchester Museum, the Contact Theater, the Whitworth Art Gallery and the Dancehouse. Take your this self guided walk to explore the attractions on Oxford Road.
Image Courtesy of Wikimedia and Up Oxford Road.
How it works: Download the app "GPSmyCity: Walks in 1K+ Cities" from iTunes App Store or Google Play to your mobile phone or tablet. The app turns your mobile device into a personal tour guide and its built-in GPS navigation functions guide you from one tour stop to next. The app works offline, so no data plan is needed when traveling abroad.

The Dancehouse Theatre is one of the largest theatre and rehearsal spaces in North West England devoted to dance. A series of interconnected buildings above a parade of shops on Oxford Road, Dancehouse was originally intended as an office complex, designed by Pendleton & Dickson during Manchester's early 20th century commercial boom. Eventually converted into a complex of art deco cinemas, the buildings closed in the 1980s before being bought by the current owners in 1990. The largest cinema was fully restored and renamed The Dancehouse Theatre.

The theatre mainly shows cult and independent films, including a recent season of European horror films. The theatre and surrounding complex also hold dance classes each evening. These include ballet, tap dancing and modern dance trends like Zumba. Tickets for all events are available at the Dancehouse box office.

The remainder of the art deco complex is now the Northern Ballet School - a series of study areas and five dance studios. Both the theatre and the ballet school contain preserved architectural features from the building's art deco roots, having been restored prior to opening in 1994. The Northern Ballet School offers full time dance and ballet training, and has produced several students that have made a name for themselves in the contemporary dance world.

Image Courtesy of Wikimedia and Pit-yacker.
2

The Manchester Museum is the region’s largest museum dedicated to natural history and archaeology. Housed in a neo-Gothic building on Oxford Road, the building lies within the University of Manchester campus, south east of the city centre. The museum was designed by Alfred Waterhouse, who created the Natural History Museum in London, as well as Manchester’s famous Town Hall. Manchester Museum began life as a collection of artifacts, owned by a group of Mancunian industrialists. They set up the Manchester Natural History society in 1821, moving the collection to its current home in 1890.

The museum currently houses over six million historical and archaeological artifacts, housed in themed collections. The Ancient Egypt collection is one of the largest collections of its kind in the UK. It is currently being combined with the museum’s many archaeological items to create a new Ancient Worlds gallery, opening in 2012. One of Manchester Museum’s most unusual areas is the Vivarium, a rainforest area housing live amphibians, most notably Amazonian tree frogs. Admission is free, and the building is fully accessible to wheelchair users and visitors with sensory impairment.

Image Courtesy of Wikimedia and DrPhoenix.
3

The Royal Eye Hospital is located on Oxford Road, amongst the leafy campuses of Manchester's two universities, and adjacent to Manchester Royal Infirmary. The ophthalmic hospital was first founded in 1814, moving to the Oxford Road building in 1886. A previous incarnation of the hospital on St. John's Street is still standing today. This building was designed by local architects Pennington and Bridgen, and has been awarded Grade II listed status. The Victorian era building is typical of the ornate, imposing red brick buildings for which the city is famous.

The hospital operated in the building until 2009 before relocating to a brand new facility on the Manchester Royal Infirmary site. Although the hospital is now closed, the imposing red brick exterior of the building remains well preserved, with crests, carvings and gold lettering all visible on the frontage. A view of the Royal Eye Hospital can be enjoyed as part of a walking tour, taking in the University of Manchester campus, the Infirmary, Whitworth Art Gallery, Whitworth Park and the Manchester Museum, all of which are nearby. The area is south east of the city centre, a 10 minute walk from Piccadilly and Oxford Road rail station.
Image Courtesy of Wikimedia and Stephen Richards.
5

Whitworth Art Gallery is situated on the fringes of Whitworth Park, in the heart of Manchester’s academic centre. Founded in 1889, the same year that the adjacent park was created, the gallery was originally known as The Whitworth Institute. Together with the park, the Institute was designed by the estate of local industrialist Joseph Whitworth, who has a nearby street named in his honour. The intention of the institute and park, set in the leafy southern suburbs of Manchester, was to provide education and entertainment for families from all social classes living in the city’s overcrowded central areas.

The University of Manchester, one of the UK’s elite red brick universities (known collectively as the Russell Group) took over the running of the gallery in 1958, converting the Victorian building into a modern exhibition space for permanent fine art collections, as well as modern installations. Throughout its history, the museum has amassed a renowned collection of textiles from around the world, representing Manchester’s heritage as a world leader in textile production. The gallery is open from 10am until 5pm Monday-Saturday, and from 10 am until 9 pm on Thursdays. The gallery is fully equipped to provide for wheelchair users and visitors with sensory impairment.
Image Courtesy of Wikimedia and Pit-yacker.
6

Whitworth Park is a large public park located to the south east of Manchester city centre. It forms part of the academic heart of the city, as it adjoins the main campuses of Manchester’s two universities – the University of Manchester, and Manchester Metropolitan University further north. The park is 18 acres in size and houses some student residences within its boundaries. It also contains the popular Whitworth Art Gallery, and faces one of Manchester’s most historic hospitals, The Manchester Royal Infirmary, relocated from the city centre in the Edwardian era.

Whitworth remains a popular attraction for tourists and local residents, as one of the closest public country parks to the city centre; it can be found on the corner of Moss Lane and Wilmslow Road in the suburb of Chorlton. The park is named after Joseph Whitworth, a local inventor and philanthropist who leased the park to the city council in 1904. The area possesses an abundance of green space in the form of park land and forests, and is ideal for an afternoon walk or family day out. As with many city parks, opening hours tend to revolve around daylight hours, with evening access to the park available in the summer months.
Image Courtesy of Wikimedia and Arcona B&B.