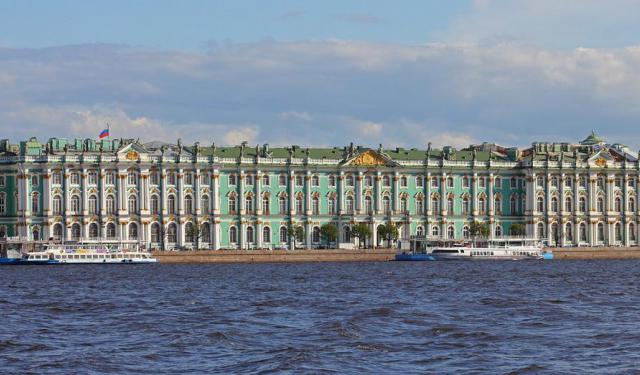 Image by Андрей! on Wikimedia under Creative Commons License.

Stretching along the River Neva in the very heart of St Petersburg is the Palace Embankment. A long standing tourist attraction, other than fresh air and a pleasant view of the river, the Embankment offers a terrific sight of the Peter and Paul Fortress and the Vasilievsky Island. The Embankment also holds marvelous landmarks such as the Winter Palace, the Hermitage Theatre, the Marble Palace and others. No visit to St Petersburg is complete without a stroll along the Palace Embankment.
How it works: Download the app "GPSmyCity: Walks in 1K+ Cities" from iTunes App Store or Google Play to your mobile phone or tablet. The app turns your mobile device into a personal tour guide and its built-in GPS navigation functions guide you from one tour stop to next. The app works offline, so no data plan is needed when traveling abroad.

One cannot truly experience St. Petersburg without visiting the breathtaking Palace Square – the central city square of St. Petersburg. The location receives its name from the nearby Winter Palace and connects the Palace Bridge and the Nevsky Prospekt. It is also the location where many important historical events occurred. Bloody Sunday, where the Tsar’s troops gunned downed protestors, occurred nearby. The Cruiser Aurora fired a shot from its forecastle gun to signal an attack on the Winter Palace during the October 1917 Revolution.

The plaza was designed from 1819 to 1829 by architect Carlo Rossi. The square contains a mix of design styles from the Winter Palace (Baroque) to the Classical style of the Imperial Army General Staff building. One of the most stunning architectural elements is the Alexander Column, a 47.5-meter high column that celebrates Russia's victory over Napoleonic France.

The monument is topped with an angel that is holding a cross. The designer was Auguste de Montferrand. One stunning aspect of the 600-ton statue is that it was installed without cranes or machinery. It also did not require any attachment to the base. Nearby tourist attractions include the Hermitage Museum, the General Staff Building, and Admiralty. The plaza is the site of many concerts by popular artists.

Why You Should Visit:
Immaculately clean square and, since it's bordered by the Hermitage and the Winter Palace, also extremely picturesque.

Tip:
The horse rides only take 20 minutes, but give a special dimension to visiting St Pete (and are not expensive).


Image by InvictaHOG on Wikimedia under Creative Commons License.
Sight description based on wikipedia
2

The Hermitage Bridge is a stone overpass that graces the gorgeous Winter Canal, which streams into the Neva River. It is located between the Hermitage Theatre and the Old Hermitage. Originally named the Upper Embankment Bridge, it is one of the oldest stone bridges in St. Petersburg and one of 315 bridges in the city. The original name was never popular with the people. Therefore, from the 18th century on, the bridge was known as the Palace Bridge. The current name was instituted in 1929.

The original bridge was a three-span wooden bridge that was constructed during 1718 to 1720 by Herman van Boles. The original arches of the bridge were brick and limestone and featured a granite facing. The stone bridge was built during 1763 to 1766. The bridge was replaced with reinforced concrete in 1934 by project engineer AD Saperstein and architect K. M. Dmitriev. In 1950, the original furnishings of the ramps were restored.

Each year, thousands of tourists and photo enthusiasts enjoy the spectacular views and stunning photo opportunities the Hermitage Bridge offers. One can easily see waterfront views of the nearby Palace Embankment where the Summer Garden and Winter, Vladimir, Novo-Mikhailovsky, New Michael, and Marble Palaces are located.
Image by Walter Smith on Wikimedia under Creative Commons License.
Sight description based on wikipedia
3

Known as one of the oldest theaters in Russia, the Hermitage features concerts, lectures, plays, and music festivals. It is one of five Hermitage buildings that are located along the Palace Embankment on the Neva River. The theater features a Neoclassical design by architect Giacomo Quarenghi and was built from 1782 to 1785 at the request of Catherine the Great.

The semicircular auditorium was designed to resemble an amphitheater. Statues of Apollo and the muses purposefully decorate the hall. The stage displays Russian aristocracy at their best and you will feel every bit the Russian aristocrat when you visit. Guests will enjoy the red velvet, fake marble, and distinctive lighting that perfectly displays the beauty of this 18th-century jewel. Although the structure survived the Soviet years, and much of the original furnishings remain, the impressive and detailed sets were lost forever.

The best of the best performed at this theater. Leading artists such as Mathilde Kschessinska, Anna Pavlova, Fyodor Chaliapin, Svyatoslav Richter, Mstislav Rostropovich and Yelena Obraztsova have graced the stage. In addition, ballets such as Giselle, Sleeping Beauty, Swan Lake, and Chopiniana are frequently performed. Whether you enjoy opera, ballet, or theater, you will not leave disappointed.

Tip:
Open seating (no allocated seats) means you must go early and choose seats near to the rear and center for the best views!
If you want to see a non-tourist ballet performance, book the Mariinsky Theatre in St Petersburg or the Bolshoi in Moscow.

Vladimir Palace is one of the last regal palaces to be constructed in St. Petersburg. Vasily Kenel, Aleksandr Rezanov, Andrei Huhn, Ieronim Kitner, and Vladimir Shreter designed the fortress. The building is located on the Palace Embankment. It was constructed from 1867 to 1872 for Alexander II's son, Grand Duke Vladimir Alexandrovich of Russia. Today, the house is known as the Academics’ House.

The 360 rooms and outbuildings features several design styles from many different influences. Neo-Renaissance, Gothic Revival, Russian Revival, Rococo, Byzantine Style, and Louis XIV, are some of the many influences one will see as they view the many exhibitions. The exterior facade features stucco rustication and the main porch has Bremen sandstone that is decorated with griffins, coats-of-arms, and cast-iron lanterns.

The palace was given to scientists after the October 1917 Revolution and became known as the Academics’ House. This transfer is probably what enabled the palace to survive the Soviet years without losing any of its original design or detail. Visitors will enjoy viewing 19th century porcelain, vases, dinner services, the Main Staircase, the Golden Staircase, the intricate ceiling tiling in the Persian Room, the Monumental Stove in the Oak Hall, and many other stunning displays of design. The palace is open for tours Monday through Saturday.
Image by Alexei Troshin on Wikimedia under Creative Commons License.
Sight description based on wikipedia
5

Marble Palace is located between the Field of Mars and the Neva River. Dubbed by many as “the only of its kind”, the interior and exterior of the property featured 32 different types of marble. Catherine the Great intended the palace as a gift for Count G. Orlov, one of her favorite friends. Architect Antonio Rinaldi built the palace from 1768 to 1785.

Unfortunately, Count Orlov did not live to see the glorious creation and the palace passed through a succession of royalty before becoming the property of the Soviet government in 1917. Much of the design was lost on the first floor when the Central Museum of Lenin was installed at the palace. The only items that survived were the Main Stairs and the Marble Room.

The museum is home to two impressive collections. The first collection is a compilation of over 500 items donated by the Rzhevskiy Brothers. It consists of 19th and 20th-century art (drawings, paintings, porcelain, and antiques), by artists Mikhail Nesterov, Mstislav Dobuzhinsky, Kuzma Petrov-Vodkin. The second set is the Ludwig Collection and features European, American, and Russian exhibitions from the Ludwig Museum.

An equestrian statue of Alexander III majestically greets all who pass through the courtyard.

Tip:
Pre-book a tour of the palace! It is during the tour that the more beautiful rooms are shown, which are closed to regular visits. The most important one – Marble Room – also has limited access.