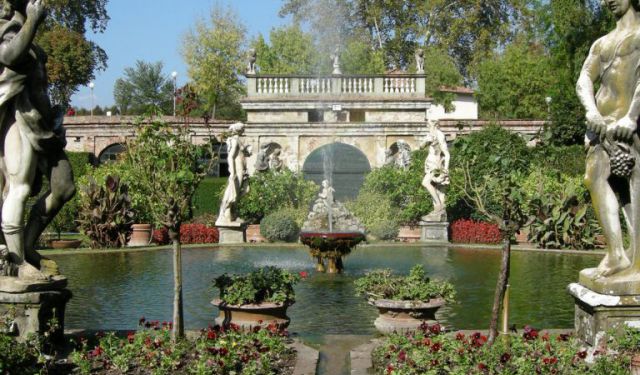 Image by Yellow.Cat on Flickr under Creative Commons License.

As an ancient city of Italy, Lucca has monumental palaces of architectural and historical value. The famous buildings are enriched by marvelous gardens, old statues and originally designed rooms. Take this self-guided tour to enjoy the beauty of the palaces of Lucca.
How it works: Download the app "GPSmyCity: Walks in 1K+ Cities" from iTunes App Store or Google Play to your mobile phone or tablet. The app turns your mobile device into a personal tour guide and its built-in GPS navigation functions guide you from one tour stop to next. The app works offline, so no data plan is needed when traveling abroad.

The Palazzo Bertolli is located outside the Walled City of Lucca, on Viale Cavour. The building was established between 1910 and 1912. The building is of a considerable size and is built of brick. The most relevant and significant thing about it is its numerous decorative details that adorn the façade. There are also two towers with balconies that offer a great view of the city. The window frames decorate the upper floors that are made by the sculptor Francesco Lucchese Petroni.
Image by sailko on Wikimedia under Creative Commons License.
2

The Palazzo Brancoli Pantera is a palace located on Via Vittorio Veneto in Lucca. The building dates from the seventeenth century and has a beautiful, private garden. Between the late nineteenth and early twentieth century, the garden of the palace was defaced for the creation of a garage with a terrace. Today it has an unusual shape with access from the north side and has some paths to the circular fountain. The palace is dominated by a large magnolia, numerous species of flowers and a small rose garden.
Image by sailko on Wikimedia under Creative Commons License.
3

The Palazzo della Magione Temple is located in Piazza della Magione. In the late nineteenth century, the building underwent a complete renovation. The garden was created in the seventeenth century and kept its form until the late nineteenth century. In 1940, the garden was considered the property of the Botanical Garden of Lucca, which also enriched many singular varieties of flowers, trees and shrubs. Today there are also species like wild pears, olive tree, a palm tree and other beautiful plants. The garden is surrounded by paths of different shapes made of stone.
Image by sailko on Wikimedia under Creative Commons License.
4

The Ducal Palace is located on the site of the Fortezza Augustan, it used to be the residence of condottiero Castruccio Castracani. The palace is of large size and owes its current appearance to the restoration in 1578 (from the left side to the central portal). The palace includes a central court, which is unfinished. It has a double portico with pillars and, in the center, a statue of the Lucchese lawyer Francesco Carrara. On the left is another unfinished court, known as Cortile degli Svizzeri, referring to the corps of Swiss Guard in service of the Republic of Lucca characterized by the use of rustication. The interior hall, accessed through a monumental stair, housed the National Gallery of Lucca, moved to Villa Guinigi in 1977. The staircase ends with a gallery of statues. The Hall of the General Council of the Republic has a Flemish painting and a fresco of the Lucchese Freedom. Above the Loggia delle Guardie is the Ammannati Loggia, decorated with grotesques and stuccose.
Image by sailko on Wikimedia under Creative Commons License.
Sight description based on wikipedia
5

The Palazzo Orsetti is an old building founded in the sixteenth century by the Diodati family from Lucca. The building has two impressive facades; both of them are embellished with a monumental entrance. The corridors lead to the yard where there is a beautiful staircase that was designed by Matthew Civitali in 1515. There is a painting in the hall entitled "The conspiracy against Wallenstein" by Pietro Paolini and the "Santa Cecilia" by Onofrio Avellino. The living room of the palace, called the Green Room, got its name from the green curtains and other details of the same colour in this room. There is also a Music Room and a beautiful garden.
Image by Valentina Manfredini on Flickr under Creative Commons License.
6

The Palazzo Pfanner is located on the border of the Walls of Lucca. It was built in the second half of the seventeenth century and belonged to the Moriconi family. In 1860 it became the property of Felix Pfanner. The garden of the palace is located between the current building and the city wall. As the gate opens, you can see a paved area of square stone providing access to the garden. The green area in front of the building is divided into four areas of lawn and a pool, decorated with statues representing the four elements: Vulcan (fire), Mercury (air), Dionisio (earth) and Ocean (water).
Image by Daderot. on Wikimedia under Creative Commons License.
7

The Palazzo Fontana-Busdraghi is located at the intersection of Via Busdraghi, 7 and Via Fillungo. The facade was completed in the sixteenth century, with a portal with columns and wooden doors decorated with coats of arms. The palace and its garden have an unusual shape. In 1630 the property was owned by Francis Busdraghi and in the second half of the century, he documented the existence of the garden, enclosed by high perimeter walls topped by a balustrade which is still viable. Today, the palace is considered a tourist attraction.
Image by sailko on Wikimedia under Creative Commons License.
8

The Palazzo Massoni is located on via dell'Angelo Custode. The palace was built in 1668 by Giovanni Controni. During the first half of the nineteenth century there lived the Massoni family. There is a particularly impressive garden that was created in the seventeenth century. The paths in the garden are bordered by low walls adorned in grotesque style with mosaics, brick and many decorative masks of exquisite marble. This decoration extends to the entire area of the garden.
Image by Sailko on Wikimedia under Creative Commons License.