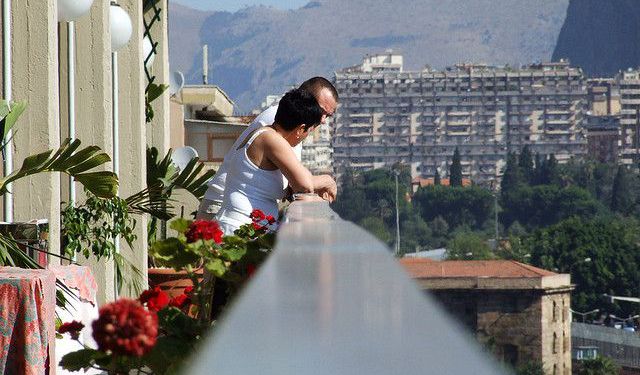 Image by gnuckx cc0 on Flickr under Creative Commons License.

A daily walk around Palermo, especially on the first day visiting, will surely raise your excitement and eagerness to learn more about this fantastic wonderland. Rarely will one find a town with such a culture, history, and architecture as Palermo.
How it works: Download the app "GPSmyCity: Walks in 1K+ Cities" from iTunes App Store or Google Play to your mobile phone or tablet. The app turns your mobile device into a personal tour guide and its built-in GPS navigation functions guide you from one tour stop to next. The app works offline, so no data plan is needed when traveling abroad.

Teatro Biondo features the most appreciated Sicilian wood, glass, iron, as well as overall craftsmen one will find. While the internal quality of the performances have attracted kings and princes of Palermo, it's the everyday people that come again and again to appreciate the sheer beauty of this fine Sicilian theater.
Image by Balarm on Wikimedia under Creative Commons License.
2

Porto di Palermo is considered to be one of the most convenient ports in the Mediterranean sea as well as the central gateway for passengers and cargo arriving in Sicily. Porto di Palermo is one of the most ancient ports in the Mediterranean. The name of the port derives from the Greek word "Pan-Ormos," which means "All Harbor."
Image by Dedda71 on Wikimedia under Creative Commons License.
3

La Cambusa, since 1988, has provided locals and tourists alike with some of the finest dining you can locate in Palermo. The restaurant's management has been passed down from generation to generation. The menu offers traditional Sicilian in rich flavored, prepared dishes.
Image by celerrimus on Flickr under Creative Commons License.
4

Giardino Garibaldi is a marvelous garden situated in the center of Palermo, at Piazza Marina. Exotic trees are the eye-catching element of the “Giardino”. The most impressive are the banyan trees that have their aerial roots exposed, but there are also fig trees and palms.
Image by Carlocolumba on Wikimedia under Creative Commons License.
5

Foro Italico is a large park on the seaside of Palermo. The garden stretches 40,000 square feet, offers pedestrian trails, tree lined streets, benches, ceramic sculptures, a bike path, as well as a large scenic, and finely illuminated area by night.
Image by currybet on Wikimedia under Creative Commons License.
6

Besides the fact that Kursaal Kalhesa is conveniently situated in one of the oldest monuments in the city, the venue is also one of the most appreciated libraries in Palermo. Along with the gigantic collection of books, visitors will admire photographs, exhibition catalogs, and other publications of interest.
Image by Dan Bock on Flickr under Creative Commons License.
8

The Villa Giulia, or Villa del Popolo, is a park lying to the east of the botannical gardens. The park was commissioned by magistrate D. Antonino La Grua e Talamanca, marquis of Regalmici in 1777 with inspiration from Giovanni Meli. Construction began that year, completing in 1778. It was later enlarged in 1866.

Designed by Nicolò Palma and named after Giulia Guevara, it was Palmero's first public park. The monumental entrance overlooking the Foro Italico is of a neoclassical design. It is permanently closed so cannot be used for access to the garden. The primary entrance, located on Lincoln street, is less developed. At the heart of the villa is the dodecahedron fountain. This consists of a sculpture composed of a dodecahedron shaped marble clock created by the mathematician Lorenzo Federici, each face of the dodecahedron featuring a sundial. This is supported by a statue of Atlas by Ignazio Marabitti, set in the centre of a circular fountain. Decorations surrounding the fountain consist of various metal sculptures. Around the central fountain are four exedra, these were designed by Giuseppe Damiani Almeyda and intended to be used for musical performances. Among the marble sculptures, the most significant one of note is the "Fontana del Genio a Villa Giulia" - the Genius of Palermo which went on to become a symbol of the city, built in 1778 by Ignazio Marabitti.

Image by Leandro's World Tour on Flickr under Creative Commons License.
Sight description based on wikipedia
9

The Orto Botanico di Palermo, or Palermo Botanical Garden, is both a botanical garden and a research and educational institution forming part of, and managed by the Department of Botany of the University of Palermo. It covers about 30 acres on top of red soil that has evolved on a calcareous tufaceous substratum. The gardens are currently home to at least 12,000 different species.

The earliest beginnings of the gardens go back to 1779, when the Accademia dei Regi Studi created the chair of "Botany and medicinal properties". They were allocated a modest plot of land to develop a small botancial garden dedicated to the cultivation of plants with medicinal benefits for the twin objectives of general learning and improving public health. The central neo-classical building, known as the Gymnasium, is located near the main entrance gate. Originally it was the main office of the Schola Regia Botanice (school of botany), the Herbarium, the library and the director's office. The Linneian section is the oldest section of the gardens, laid out in a rectangular shape and divided into four quadrangles, the "quatrains" (or quartini). Each quatrain is further divided into flowerbeds, within which the plants were originally organised along the lines of the Linneian system of classification.

Image by tato grasso on Wikimedia under Creative Commons License.
Sight description based on wikipedia
10

Piazza Magione was founded in the 1990s. Before it became a green grassy park, it served as a car parking. Now it hosts concerts during summertime and is the favorite place for children from local neighborhoods to play.
Image by Dedda71 on Wikimedia under Creative Commons License.