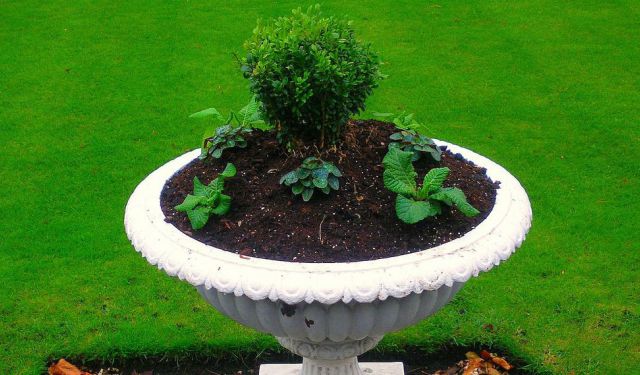 Image by UggBoy on Flickr under Creative Commons License.

In the golden age of Queen Victoria, suzerain of the Kingdom of Great Britain and Ireland, Dublin grew into a wonderful and flourishing city with many parks and gardens. It has succeeded in maintaining these natural wonders over the centuries. Even in the 20th century, after a cruel modernization and remodulation in the 60s, the city of Dublin is still one of the greenest European capitals. Take this tour and breath in the green air of Dublin's parks.
How it works: Download the app "GPSmyCity: Walks in 1K+ Cities" from iTunes App Store or Google Play to your mobile phone or tablet. The app turns your mobile device into a personal tour guide and its built-in GPS navigation functions guide you from one tour stop to next. The app works offline, so no data plan is needed when traveling abroad.

Adjoining St. Patrick's Cathedral, St Patrick's Park is believed to be the site of baptism of the first Irish Christians by St. Patrick, who used water from the River Poddle which now flows underground. St. Patrick's Park was created under the eponymous Act of 1897 by Lord Iveagh. Its layout was done by Arthur Dudgeon C.E. in 1901, and the park itself was opened to the public in 1904. Lord Iveagh had remained in charge of the park's maintenance for several years until Dublin Corporation completely took it over in the 1920s. With a children's playground inside, the park provides a beautiful setting for the cathedral. There were several additions to the park made in 1988, including a Literary Parade which pays tribute to Swift, Mangan, Wilde, Shaw, Yeats, Synge, O'Casey, Joyce, Behan, Beckett, Clarke and Dillon, and the Liberty Bell Sculpture.

Why You Should Visit:
Beautiful park with plenty of area to hang out and have a picnic; lots of walkways, benches to rest on, flowers and people to watch.
The Literary Parade on the east side of the park with all of the famous Irish poets and writers is quite fun.


Image by infomatique on Flickr under Creative Commons License.
2

Iveagh Gardens is a public park located behind the National Concert Hall. It is a lovely, calm place to spend an hour or so in the sun.

This beautiful park isn’t very large, but it full of things to see. It was first opened to the public in the early 19th century, but no-one took much care of it and it became something of a wilderness and the land might have been sold off for housing, if not for Benjamin Guinness who took it over and restored it in 1863 after Iveagh House was built. His son Edward gave the park to the University College of Dublin in 1908.

The Gardens are laid out in a harmonious blend of a French formal garden and an English landscaped garden. You will find hidden grottoes and waterfalls, sunken lawns and fountains. In various places statues of Roman and Greek gods peer at you from the bushes.

There is a lovely box hedge maze to explore with its sundial in the center, a well stocked rose garden and an American garden with mellow meadow-like grass and rockeries. You can stroll along the pathways, shaded by woodland trees or sit on a bench near the bronze statue of the 19th century tenor John McCormack.
Image by infomatique on Flickr under Creative Commons License.
3

If you don’t want to wait your turn in one of the busy restaurants in the shopping center, the best thing to do is to pick up a sandwich and a drink and take it to Saint Stephen’s Green Park on the south end of Grafton Street.

This 27-acre park is the biggest of Dublin’s Georgian square parks. It was laid out in 1880 by Sir A. Guinness and is a delightful area to have your lunch, with its flower beds, shady walks, fountains and benches round a large ornamental lake where you can feed the ducks. In the summer open-air concerts are held here.

The rectangular park is surrounded by stately Georgian houses and is noted for its many statues and memorials. You will see a statue honoring Sir A. Guinness; a bronze statue of Theobald Wolfe Tone surrounded by monoliths (the locals call this “Tonehenge”); a fountain statue of the Three Fates, donated by German refugees after the Second World War; a statue of Robert Emmet and busts of James Joyce and Constance Markievcz.

Among the memorials are the Yeats Memorial Garden with its statue by Henry Moore; the Fusiliers Arch, a memorial to the Royal Dublin Fusiliers who died in the Second Boer War; a monument to Jeremiah O’Donovan Rossa, the Fenian leader and member of the Irish Republican Brotherhood and a memorial of the Great Famine that caused so much death and misery in Ireland between 1845 and 1850.

Why You Should Visit:
Beautiful, cosy and tranquil park. There are lovely little ponds with swans and ducks and plenty of places to sit.
Many cafes nearby, just down the road, where you can pop in for cake and coffee/tea before or after your walk.

One of the best places to relax is Merrion Square Park in the center of Merrion Square, the most distinguished of the remaining Georgian squares in Dublin.

The park is a railed off garden, once for the exclusive use of the Square’s residents, but now open to the public. On Sundays in the summer the railings are festooned with paintings executed by local artists and it’s possible to pick up a wonderful landscape or portrait by an up and coming artist, at a reasonable price. Open-air concerts are also held in the park in the summer.

The gardens were laid out between 1762 and 1764 and since they have been opened to the public a children’s playground has been added. There is also a lovely floral garden and a heather garden. The park is full of statues and busts; the most notable is the “Jester’s Chair” which is a memorial to Dermot Morgan.

You can see a superb statue of Oscar Wilde relaxing on a quartz rock. It was sculpted by Danny Osborne in 1997 and shows the great man, dressed in his favorite green smoking jacket with red collar and cuffs, his expression enigmatic. The details of this statue are truly remarkable and you would almost expect him to get up and stroll off through the park, perhaps to the house on the square where he grew up.
Image by William Murphy on Flickr under Creative Commons License.
Sight description based on wikipedia
5

5) Garden of Remembrance (must see)

If you want to spend a quiet hour or so away from the hustle and bustle of Dublin, take a sandwich and a book and go sit in the Garden of Remembrance, which you will find on Parnell Square North.

The beautifully laid out gardens were designed by Daithi Hanly in commemoration of the men, women and children who gave their lives for the freedom of Ireland between 1798 and 1921. The gardens were opened in 1966 by President Eamon de Valera on the 50th anniversary of the Easter Rising, during which he had been a commander.

The main theme of the gardens is the sunken pool in the shape of a Latin Cross, surrounded by benches and flowers in wooden tubs. The floor of the pool is tiled and you will see 4 mosaic designs along the “upright” part of the cross. These symbols represent the Celtic custom at the end of a battle, when the shields and weapons were cast into the water as a peace offering.

At the uppermost part of the pool is a shallow flight of steps leading to Oisin Kelly’s beautiful statue of the Children of Lir. The statue, which is based on Celtic mythology, represents rebirth and resurrection. Surrounding the statue and the sunken pool are neatly kept green lawns.

Why You Should Visit:
An oasis of peace, color and tranquility in the heart of the city, enhanced by excellent craftsmanship in design.
The ponds and statues are great eyecatchers and even if you just want to enjoy the few rays of sunlight Dublin gets every year, this is a good place to start at.

Tip:
No public restroom, but you could always duck into The Hugh Lane across the street if it's open.

Dubliners and the Irish in general are known for their passion for whiskey and beer. The Irish and the Scots are constantly at odds as to who makes the better whiskey and who could imagine St. Patrick's day without some famous Irish green beer ? Check out this amazing tour, that will guide you trough an area packed with pubs, and find out first hand what an Irish pub crawl means.

Dublin's city center is home to several prominent galleries, like the The National Gallery of Ireland, which is a must see for any art lover. Dublin has a varied and rich art-scene, from classical to contemporary, from domestic to international, it offers something for everyone. Take the following tour to discover the most popular and prominent art galleries in Dublin.

Temple Bar is an area on the south bank of the River Liffey in central Dublin, Ireland. Unlike the areas surrounding it, Temple Bar has preserved its medieval street pattern, with many narrow cobbled streets. It is promoted as Dublin's cultural quarter and has a lively nightlife that is popular with tourists, with locations proving to be traditional Irish hotspots

You don't always find everything that's worth-while on a map, smaller and less famed sights are often omitted on tourist maps and brochures. However a trip off the beaten track can sometimes be the most rewarding. Take this tour and find some of Dublin's secret places, some of which even the locals aren't always aware of.

It would be a pity to leave Dublin without having explored its specialty shops and bringing home something truly original. We've compiled a list of gifts which are unique to Dublin and can be purchased in the wonderful souvenir shops along Nassau St.