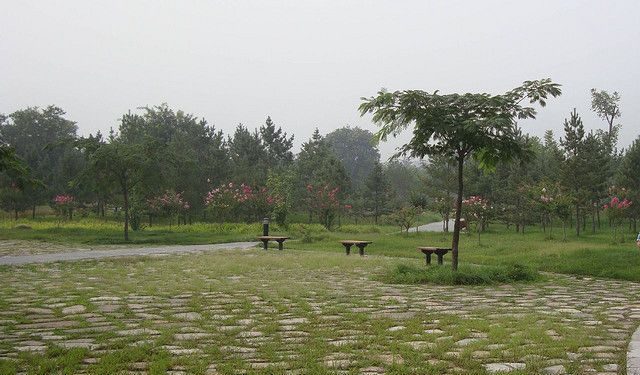 Image by gwydionwilliams on Flickr under Creative Commons License.

Parks and Squares Walk in Xian (Self Guided), Xian

Xian is a historical city or as locals say a city of the past. Though it is considered to be rather small, it is perfectly formed. All the main sights are located in the center, surrounded by a circle of small squares with landmarks and beautiful lakes. Though they do not represent must-see spots, we think you will enjoy this walking tour through Xian's amazing gardens.
How it works: Download the app "GPSmyCity: Walks in 1K+ Cities" from iTunes App Store or Google Play to your mobile phone or tablet. The app turns your mobile device into a personal tour guide and its built-in GPS navigation functions guide you from one tour stop to next. The app works offline, so no data plan is needed when traveling abroad.

In 1957, the Municipal Government of Xian decided to lay a recreational park on the site of the Xingqing Palace. Today the park has a lake where visitors can hire a boat or walk along the path on the banks. One can cross the lake over three bridges, the Yingbing bridge, the Mudan bridge or the Qu Bridge. The old palace garden buildings like the Chengxiang Pavilion, the Flower Shedding Brilliance Gallery, the Nanxun Hall and the Changqing Hall are restored to their former glory. Every April, the park plays host to a Tulip Fair and an annual Peony Fair.

Image by Manoela Jung on Flickr under Creative Commons License.
2

The Geming Revolution Park is located north of the Xiwu Road in Xian. It was laid to commemorate the brave soldiers from the city who fought to defeat the Northern Warlords during the Northern Expansion of 1927.

The Northern Warlords besieged the city of Xian for eight months and burned 100,000 wheat fields around Xian. They forced the villagers to dig a deep pit around the city to cut off supplies. The generals of the National Army, Yang Hucheng and Li Huchen led the people and refused to surrender till a larger army under the leadership of General Feng Yuxiang reached the city and defeated the enemy. Nearly 50,000 people lost their lives in protecting Xian and the park established in 1929 commemorates the bravery of the martyrs.

The Geming Revolutionary Park contains Taihu Stones that are relics from the Tang Dynasty. There is a manmade lake with traditional Chinese style bridges, pavilions and pathways. The Revolutionary Pavilion has statues of martyrs of the revolution, Wang Taiji and Wang Taicheng and a temple where the locals pay their respects to the martyrs. Besides a place to pay homage to the brave, Revolutionary Park also offers amusement facilities for children including a merry go round, electronic planes and cable cars.

Lianhu Square is situated in the southern part of the Railway station. It is considered to be one of the most beautiful green ares in Xian, though it is one of the smallest. The square was founded around a lake, so you can not only walk along the alleys, but also enjoy a short boat trip. The square has lots of fragrant locust trees and weeping willows whose branches bend over the water. Visiting this square is suitable for both children and elderly people.
Image by ell brown on Flickr under Creative Commons License.
4

Huancheng Xiyuan Square is located in the downtown Xian, near the West City Gate. It has a very interesting position, as it is situated along the Old City Wall. Maybe it doesn't have the rarest plants, but it's a nice place to admire the ancient architecture, while sitting on a bench. A narrow river separates the City Wall from the square. However there are several bridges that connect them.
Image by Yi-Ting Chen on Flickr under Creative Commons License.
5

The LaoDong Park is located in the busy downtown area of the city. It is a frequently visited park and the local people, young and old come here for recreation and relaxation.

The LaoDong Park or Labor Park covers an area of 1.02 million square kilometers. Unlike most other parks in the city, this is a modern recreation area with modern facilities. It has spaces for a leisurely stroll, there are cultural and recreational activities taking place and facilities for the amusement of children are also available. Despite the many activities in the park, it retains the ambience of a traditional Chinese Garden with flowers, animals and sculpture.

Visitors can see elderly residents performing Tai Chi exercises at the park and young couples and families taking leisurely strolls. . There is a lotus pond and cherry tree woods, traditional pavilions and terraces and a clean brook gurgling within LaoDong Park. They can also see ostriches, spotted deer and peacocks and red crowned cranes. Small cafes sell seafood including a specialty dish made of sea slug. There are also small stores selling souvenirs made of local shells that visitors can take home as mementoes to remember the visit to the city and the park.
Image by Caitriana Nicholson on Flickr under Creative Commons License.

Places of Worship in Xian Tour

Xian looks like a melting pot of different cultures and religions in Asia. If you visit the places of worship in this city you will realize this. Here you can admire pagodas, temples (holy places for Buddhists) and mosques (place of worship for the followers of Islam). If you like exploring other religions you will enjoy taking this self-guided tour.

While the city of Xian is famous for its pagodas, a tremendous city wall and gorgeous temples, several "treasures" are hidden on the outskirts of the city. Actually, the Terracotta Warriors and Horses, located in the eastern suburb, is a historical must-see. Also, you will be impressed by the Lishan mountain's incredible beauty, admired many centuries ago by Chinese emperors. We...  view more