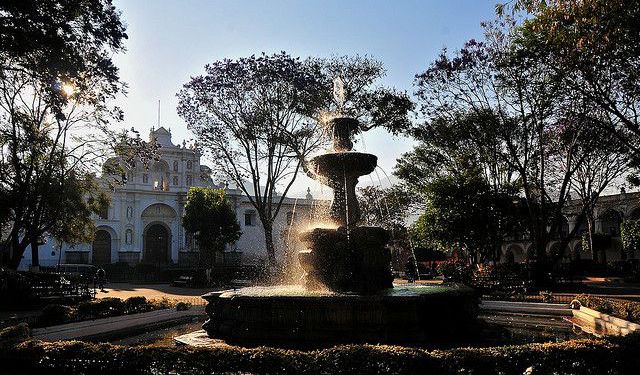 Parque Central is the center of social life for the residents in Antigua. What makes the park so popular for tourists is the opportunity to visit a good number of famous buildings around the park. Follow this self guided walk to explore the history behind the buildings at the very center of the city.
Image Courtesy of Flickr and antwerpenR.
How it works: Download the app "GPSmyCity: Walks in 1K+ Cities" from iTunes App Store or Google Play to your mobile phone or tablet. The app turns your mobile device into a personal tour guide and its built-in GPS navigation functions guide you from one tour stop to next. The app works offline, so no data plan is needed when traveling abroad.

The Museum of Santiago de los Caballeros is located in front of Central Park, at City Hall. The museum offers five exhibition rooms with ancient paintings and sculptures. In one of these rooms, tourists may observe a frame representing the old city, as well as witness other important changes to the city. Swords, cannons, and muskets are also exhibited here.

Palacio de los Capitanes is located in the southeast corner of Central Plaza. Palacio de los Capitanes is another popular tourist attraction, constructed with a wooden floor and stunning arches that support the entire structure. The historical landmark was constructed in the middle of 16th century and was once the residence of the Viceroy, head offices for the government of Central America, for 200 years.
Image Courtesy of Flickr and sikeri.
3

Antigua Guatemala Cathedral stands on the site of a church originally constructed in 1541. Several earthquakes damaged the original building, leading to its demolishment in 1669. Another building took its place, consecrated in 1680. This church was one of Central America's largest by 1743. The 1773 earthquake caused substantial damage, but the two towers at the building's front escaped most of the damage.

Some of the sights to see inside the cathedral include sacred art that has been the subject of restorations. The high altar is one of the most well-preserved areas. At nightfall, the cathedral is impressively illuminated.

Guatemala’s first printing press was established here in 1660. In 1956, the building became home to the Museum del Libro Antiguo. Among the exhibits, visitors will find a copy of the original printing press along with an overview of the history of printing, the will of Hermano Pedro - Guatemala’s most well known religious character - as well as a room dedicated to the process of making marbled paper.

Antigua's City Hall, or "Palacio del Ayuntamiento," is located across Central Park, next to the Cathedral. The original building features several different session rooms, a jail, as well as a prison chapel. Restoration efforts were led by architect Diego de Porres in the middle of the 18th century.
Image Courtesy of Flickr and René Mayorga.
6

In the heart of the city, or the front of Parque Central, tourists will be quick to notice a long building with several slim columns. This building is called the Portal de las Panaderas, or Baker’s Porch. The walls continue to maintain the secrets of the colonial past, offering a fountain and large assortment of cafés inside the court.
Image Courtesy of Flickr and Frank_am_Main.