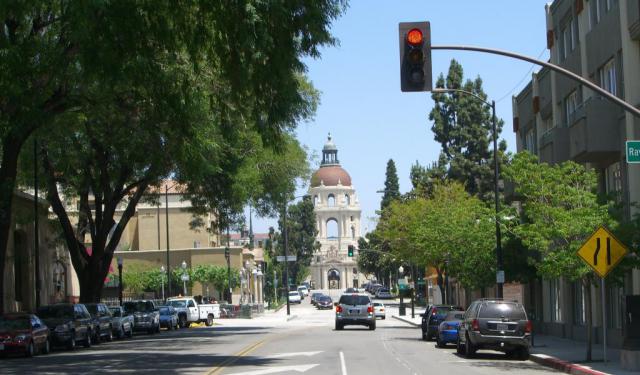 Image by Eric Fredericks on Flickr under Creative Commons License.

Pasadena is a city rich in cultural venues, monuments, museums and churches. The downtown is a green area with many great places of national and international importance. Don't hesitate to spend a few hours touring this part of the city.
How it works: Download the app "GPSmyCity: Walks in 1K+ Cities" from iTunes App Store or Google Play to your mobile phone or tablet. The app turns your mobile device into a personal tour guide and its built-in GPS navigation functions guide you from one tour stop to next. The app works offline, so no data plan is needed when traveling abroad.

Pasadena City Hall, completed in 1927, serves as the central location for city government in Pasadena and it is a significant example of the City Beautiful movement of the 1920s. In 1923, the people of Pasadena approved a bond measure issuing $3.5 million towards the development of a civic center. City Hall was to be the central element of this center.

The San Francisco architecture firm of Bakewell and Brown designed the City Beautiful and California Mediterranean of Mediterranean Revival Style and Spanish Colonial Revival Style architecture influenced City Hall. It was completed on December 27, 1927 at a cost of $1.3 million. It measures 361 feet (110 m) by 242 feet (74 m), and rises 6 stories. There are over 235 rooms and passageways that cover over 170,000 square feet (16,000 m2). The defining dome, located above the west entrance, is 26 feet (7.9 m) tall and 54 feet (16 m) in diameter.

The City Hall has long been a favorite shooting location for filmmakers. The courtyard was used in the 1995 movie "A Walk in the Clouds" to portray a Napa Valley town square. It has also been used as an embassy in the "Mission: Impossible" television series, and a villa in Charlie Chaplin's Oscar-nominated 1940 film "The Great Dictator." Pasadena City Hall currently serves as the city hall of fictional Pawnee, Indiana, in the television show "Parks and Recreation."

Image by Bobak Ha'Eri on Wikimedia under Creative Commons License.
Sight description based on wikipedia
2

Though HALL OF FAME BASEBALL star Jackie Robinson was born in Cairo, Georgia, he spent his formative years in Pasadena, attending John Muir High School and Pasadena Junior College in the city. And while Jackie’s exploits as the man who broke baseball’s color barrier are understandably more well-known, his brother Mack also made sports history during the 1936 Olympic Games, taking the Silver Medal in the 200 meter sprint, behind teammate Jesse Owens.

This memorial then, pays tribute to both of the Robinson brothers. Jackie looks towards Brooklyn, NY, to symbolize the destiny waiting for him 2,800 miles to the east. His elder brother Mack, who returned home to little fanfare and a city job which was later taken from him in retaliation for black residents going to court to force the desegregation of municipal pools, faces towards City Hall, reflecting his complicated relationship with his home town.
***PH***
https://www.atlasobscura.com/places/jackie-and-mack-robinson-memorial
https://www.cityofpasadena.net/about-pasadena/public-memorials-and-monuments/
http://sandcartstudio.com/Sculpture/HandS/PRM/prmIndex.html

Image by Gaston Hinostroza on Flickr under Creative Commons License.
3

All Saints Church is an Episcopal church and part of the Episcopal Diocese of Los Angeles. The current building is the third home for activities of this church.

The church has a reputation of being one of Southern California's most liberal churches and one of the largest Episcopal churches in the country. Former Rector Ed Bacon said that political activism "is in the DNA of the church."

The church began in November 1882 when eleven people gathered in the home of Mr. and Mrs. C.C. Brown for services conducted by the Reverend Trew. In 1885 the congregation dedicated its first church building at the corner of Colorado Blvd. and Garfield Ave. on April 5 (Easter Day). The parish continued to grow rapidly, and a new site was purchased at 132 North Euclid for the building of a 600-seat church. First services were held Easter Day, April 21, 1889. The congregation outgrew the church building, and a new church building was built in 1923. It opened in 1924 and has been in service since then.

All Saints bought additional property in 1926–7, where it built a parish hall and rectory. They were also designed in the English Gothic style, and form an integrated courtyard with the main church.

In 1980, All Saints was listed by the National Park Service on the National Register of Historic Places as a Contributing Structure to the Pasadena Civic Center District.
Image by Doncram on Wikimedia under Creative Commons License.
Sight description based on wikipedia
4

The Pacific Asia Museum is an Asian art museum located at 46 N. Los Robles Avenue. The museum was founded in 1971 by the Pacificulture Foundation, which purchased “The Grace Nicholson Treasure House of Oriental Art” from the City of Pasadena. Grace Nicholson donated the structure to the city for art and cultural purposes in 1943 and was a dealer in Native American and, later, Asian art and antiques. It houses some 15,000 rare and representative examples of art from throughout Asia and the Pacific Islands.

The building is listed in the National Register of Historic Places and was built in 1926 and designed by the architectural firm of Marston, Van Pelt & Maybury. One of the museum's 2009 exhibits looked at the mash-up of Chinese calligraphy and American graffiti. US-China Today has an article and slide show on the exhibit and a video featuring the curator and a couple of the artists who contributed to the exhibit: Calligraffiti: Crossing the Divide.

The Pasadena Playhouse is a historic performing arts. The 686-seat auditorium produces a variety of cultural and artistic events, professional shows, and community engagements each year.

Beginning around 1912, the period known as the Little Theatre Movement developed in cities and towns across the United States. The artistic community that founded the Pasadena Playhouse was started in 1916 when actor-director Gilmor Brown began producing a series of plays at a renovated burlesque theatre with his troupe "The Gilmore Brown Players". Brown established the Community Playhouse Association of Pasadena in 1917 that would later become the Pasadena Playhouse Association, which necessitated a new venue for productions.
Image by JuanKenobi on Wikimedia under Creative Commons License.
Sight description based on wikipedia
6

Colorado Street, renamed "Boulevard" in 1958, runs through Old Town Pasadena from Arroyo Parkway to Orange Grove Boulevard. It is the north–south zero axis of the street grid in Pasadena. The Tournament of Roses parade route travels north on Orange Grove Avenue then east along Colorado Boulevard as far as Sierra Madre Boulevard, where it heads north to Victory Park.

Most major Pasadena attractions are found along or within one block of Colorado Boulevard. Pasadena City College is located at 1570 E. Colorado Boulevard. The street was mentioned in Jan and Dean's 1964 hit song The Little Old Lady from Pasadena. On this street you can find Paseo Colorado, also called Paseo, is an upscale outdoor mall, located between Colorado Boulevard to the north and Green Street to the south., covering three city blocks with office space, shops, restaurants, a movie theater, and 400 loft-style condominiums (called Terrace Apartment Homes) above.
Image by Ken Lund on Flickr under Creative Commons License.
Sight description based on wikipedia
7

The Civic Auditorium, one of the major structures in the Pasadena Civic Center District, was built in 1931 and is best known for being the home of the Emmy Awards from 1977 until 1997. It was designed by architects George Edwin Bergstrom, Cyril Bennett and Fitch Haskell. Today, the Auditorium is home to the People's Choice Awards and the Pasadena Symphony Orchestra. The 3,029-seat theater hosts musicals, operas and concerts, among other events, on its 56-foot (17 m) by 42-foot (13 m) stage.

The auditorium was famously the site of some of the earliest live performances of Van Halen before being discovered. It has also been used for the Miss Teen USA 2007 pageant. The preliminary and final competitions were broadcast live on NBC.

The auditorium has hosted the America's Got Talent audition rounds since season 11 and has hosted the NAACP Image Awards numerous times.
Image by Alan Light on Flickr under Creative Commons License.
Sight description based on wikipedia
8

The Hotel Green was built in 1893 by George Gill Green, and was later expanded by him with two additional buildings in 1898 and 1903, creating a complex of three structures. The Hotel Green was the home of the Valley Hunt Club and the Tournament of Roses association.

Hotel Green, designed by Los Angeles-based architect Frederick Roehrig in 1893, was the first of the three buildings. The second building in the complex was originally known as the "Central Annex" and became known as "Castle Green," while the third building is known as the "North Annex." The entire block of annexes is listed on the National Register of Historic Places and is a Pasadena Historic Monument.

In certain scenes from the Puppet Master film series the Green Hotel was filmed to double as the "Bodega Bay Inn".

It is briefly seen in the 2005 film Rumor Has It.
Image by Fran and Rowena on Flickr under Creative Commons License.
Sight description based on wikipedia
9

Nestled in the heart of Old Pasadena and comprising a full city block, One Colorado is where historic architecture meets superlative shopping and alfresco dining. The property offers an unexpected, welcoming charm with turn of the 19th century buildings and cobble stone alleys. Free outdoor events are held year-round in its central courtyard, including film festivals, live music, kids' programs and cultural events. One Colorado's array of vendors includes national retailers such as Anthropologie, J Crew, Sephora and Nike as well as boutiques and unique, family-run shops including The Soap Kitchen, Gold Bug and Dots Cupcakes. Enjoy patio dining at Sushi Roku, Sage Vegan Bistro and Brewery, Il Fornaio, and Salt & Straw.

Memorial Park is the second largest place of recreation and green area in downtown Pasadena. It is largely known for cultural and entertainment activities such as the weekly, free summer concerts held at the Levitt Pavilion. Also found here is the American Soldiers' Monument and playgrounds for children.
Image by Sarah004 on Flickr under Creative Commons License.

The city of grand architectural heritage unmatched by any other Southland destination, Pasadena is famous for an array of beautiful buildings and construction engineering marvels. Many of the local buildings, such as the Blacker House mansion designed by Charles and Henry Greene, have starred in movies, TV shows and commercials. To check out some of these recognizable locations, iconic public...  view more