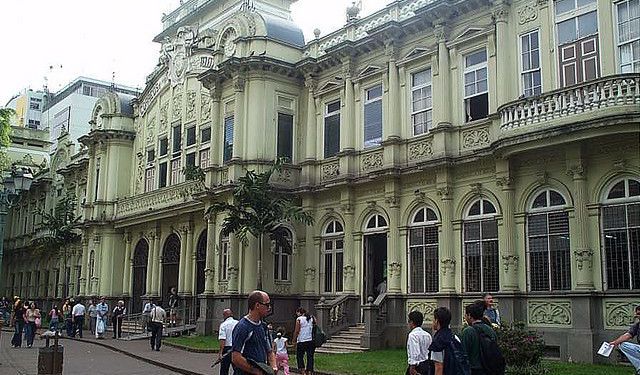 Image by ReservasdeCoches.com on Flickr under Creative Commons License.

The Paseo Colon is a modern area in San Jose where you will find most of the business centers and foreign embassies, as well as other architectural highlights and tourist attractions. At the end of Paseo Colon is Sabana Park, which stands out among the local metropolitan communities because of its proximity to the business district and its large area dedicated to recreation. Take this tour to explore the beauty of this modern area.
How it works: Download the app "GPSmyCity: Walks in 1K+ Cities" from iTunes App Store or Google Play to your mobile phone or tablet. The app turns your mobile device into a personal tour guide and its built-in GPS navigation functions guide you from one tour stop to next. The app works offline, so no data plan is needed when traveling abroad.

The Museo de Ciencias Naturales La Salle is a major attraction in San Jose. Located on the corner of Parque la Sabana, which is next to the Ministry of Agriculture and Livestock, this interesting little natural science museum features one of the best butterfly collections you can find in the country. Since Costa Rica is a very tropical country, with lots of rainforests, they are blessed with lots of beautiful creatures to show off.

Butterflies are not the only thing to see, however. You can find reptiles in collection jars and a rather weird collection of stuffed animals, which have aged a bit through the years. A leatherneck turtle, the biggest reptile on Earth, is on display here as well. You will also want to check out the grouper they have on display because it has to be one of the ugliest creatures ever found. So if oddity and eclectic displays are your thing, you need to pay a visit to the museum. The cost of admission is $1.00, so it will be hard to beat that deal.

Why You Should Visit:
Excellent place to learn about the planet's biological diversity!


Image by Tony Hisgett on Flickr under Creative Commons License.
Sight description based on wikipedia
2

The Contraloria General’s building stands out as one of the tallest buildings in San Jose. It belongs to the branch of the government that controls the use of public funds to improve the management of public funds and to promote political and civilian control. The nearest attraction is La Sabana Park.
Image by mchaconcr on Flickr under Creative Commons License.
3

The Museo de Arte Costarricense has been built into an old air terminal building at the Parque la Sabana. At one point in time, this location was the main airport for the whole area. The airport has since been moved to a new location.

The museum features the paintings of Costa Rican artists, with permanent exhibits including the works of Teodorico Quiros, Margarita Berthau, and Enrique Echandi. There are also some works on display from artists outside the country, such as paintings from Diego Rivera and Alexander Calder.

Pay attention to the overall architecture here, for there are many wall paintings that portray the history of the lives of the Costa Rican people. The wood carvings are also quite stunning, as many of them are overlaid in gold.

Why You Should Visit:
The curating of both the permanent & temporary exhibits is unsurpassed – you could spend hours with either, as well as with the magnificent mural in the upstairs lounge.
This museum is free and surely one of the art highlights of San José, besides being a wonderfully kept historic place!

Tip:
Don't miss the sculptures and beautiful garden outside.

La Sabana Metroplitan Park is one of San Jose, Costa Rica’s biggest and most prominent parks. It is 72 hectares in size. It is very near all the city’s core districts, so it offers a real needed green space for this busy city. The locals often call it the “lungs of San Jose” just because of the green space here.

The park was officially opened to the public in 1977, though its origins go back two centuries. A local priest of the 1700s, named Mata Redonda actually donated the land to the city that year. It has been used by people for relaxation and sports since. It has now, then, had over 150 years to develop the location. For a while, the country had its first international airport located here, which was called the La Sabana International Airport. It has since been moved elsewhere. The park now contains the country’s National Museum and Art Museum.

For the sports enthusiast, this may be your location in town. It has several athletic fields, a shooting range, and a running and skating track. There is certainly something for everyone here.

Why You Should Visit:
Great spot to view the river and Cork Harbour

Tip:
Visit over the weekend and you'll find there are numerous sports games going on and hundreds of people just enjoying the park – great atmosphere!
Don't miss the outdoor sculpture garden as it is quite large and interesting as well.
Note: Women are advised not to go alone into the wood areas or in the evenings, around or after sunset.
Image by TRES AMIGOS GALERÍA DE FOTOS on Flickr under Creative Commons License.
Sight description based on wikipedia
5

The Museo Histórico Tecnológico del Grupo ICE was born in the year 1993, in order to recount the history of electricity and telecommunications in Costa Rica. The Museum contains documentary files, historical background, old communication devices and many more items.
Image by Gary Todd on Flickr under Creative Commons License.
6

You will want to go in and see the stained glass windows, as they are some of the most beautiful in town. There is also a stunning wooden ceiling here, which is ornately carved. The altar area is also quite well done is design, so take a moment to go in, if you get a chance.

The location is also well known for the park located next door. It is a local hangout for the Nicaraguan people of the city. There is also a giant stone sphere located here which is of local interest. The sphere dates back to the very beginnings of the country and is as historic as any Mayan or Aztec piece to be found in the neighboring countries surrounding Costa Rica. The spheres remain a mystery because no one is for certain what they mean. They are also a bit of a mystery because they are perfectly round, and no one knows how that was accomplished so long ago.

Tip:
Be aware that the adjacent park is not a good area to be in the late afternoon or after dark.
Image by strizich on Flickr under Creative Commons License.