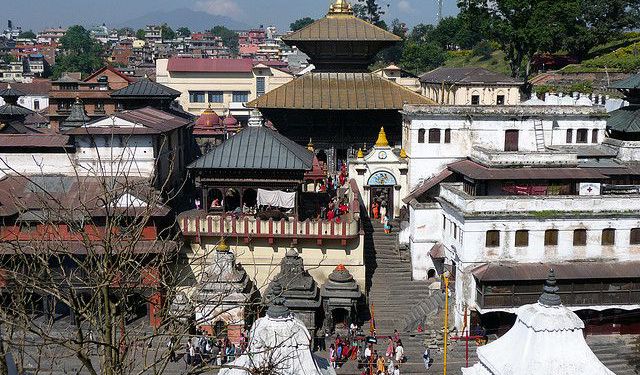 Pashupatinath Temple is situated near the Tribhuvan International Airport in Kathmnadu. The area in which it is located is truly picturesque - surrounded by virgin jungle. Though you may not be allowed to enter Pashupatinath, you can admire it from the other bank of the river, or you can visit some famous temples situated in this region. We encourage you to take the Pashupatinath temple self-guided tour and explore this beautiful enclave of Kathmandu.
Image Courtesy of Flickr and lavenderstreak.
How it works: Download the app "GPSmyCity: Walks in 1K+ Cities" from iTunes App Store or Google Play to your mobile phone or tablet. The app turns your mobile device into a personal tour guide and its built-in GPS navigation functions guide you from one tour stop to next. The app works offline, so no data plan is needed when traveling abroad.

Pashupatinath Temple is one of the most significant Hindu temples of Lord Shiva in the world, located on the banks of the Bagmati River in the eastern part of Kathmandu. The temple is listed in UNESCO World Heritage Sites list. The temple is one of the 275 Paadal Petra Sthalams (Holy Abodes of Shiva on the continent). Hindus alone are allowed to enter the temple premises. Non-Hindu visitors are allowed to have a look at the temple from the other bank of Bagmati river. It is regarded as the most sacred among the temples of Lord Shiva (Pashupati).

The temple is of the Nepalese pagoda style of architecture. All the features of pagoda style is founded here like cubic constructions, beautifully carved wooden rafters on which they rest (tundal). The two level roofs are of copper with gold covering. It has four main doors, all covered with silver sheets. This temple has a gold pinnacle, (Gajur), which is a symbol of religious thought. The western door has a statue of large bull or Nandi, plated in bronze. The deity is of black stone, about 6 feet in height and the same in circumference.

Image Courtesy of Wikimedia and China Crisis.
Sight description based on Wikipedia.
2

Raj Rajeshwari temple, along with Nawa Durga and Pancha Dewal temples, is in the southern part of the Pashupatinath. Durga Raja Rajeswari, worshipped in this temple, is the Hindu goddess of knowledge. It is believed that she is served by celestial maidens and gives power to the bow of Lord Shiva.
Image Courtesy of Flickr and mckaysavage.
3

Jay Bageswari temple was founded in honor of Saraswati, the goddess of learning. Also, she is considered a goddess that gives speech to children or to someone who has lost this ability. Saraswati came into this temple after defeating the demons which impede one's journey to wisdom.
Image Courtesy of Flickr and jyoti pb.
4

Bhandarkhal jungle or Bhandarkhal garden is confined to the Pashupatinath area. Besides its natural beauty, it has religious links with the activities happening in the temple. This enclave is bounded by the Ring Road, the Gyaneshwar Road and by residential districts to the North and the West. The beauty of this Nepali forest is truly remarkable and it's worth a visit.
Image Courtesy of Wikimedia and Rajesh Dhungana.
5

Bagmati flows through the Kathmandu valley and is the river separating Kathmandu from Lalitpur. It is considered a holy river both by Hindus and Buddhists. A number of Hindu temples are located on the banks of this river. The importance of Bagmati also lies in the fact that Hindus are cremated on the banks of this holy river, and Kirants are buried in the hills by its side. According to the Nepalese Hindu tradition, the dead body must be dipped three times into the Bagmati river before cremation. The chief mourner (usually the eldest son) who lights the funeral pyre must take a holy river-water bath immediately after cremation. Many relatives who join the funeral procession also take a bath in the Bagmati River or sprinkle the holy water on their bodies at the end of cremation. The Bagmati River is said to purify people spiritually.
Image Courtesy of Wikimedia and Ananta Bhadra Lamichhane.
Sight description based on Wikipedia.
6

Ram Temple is situated on the east bank of the Bagmati river. It contains the deities of Sita, Ram and Hanuman. In front of the Lakshmi Narayana (Vishnu) temple situated nearby, you can also admire a statue of Garuda.
Image Courtesy of Flickr and lavenderstreak.
7

Guheswari Temple Kathmandu is one of the revered holy temple, which is dedicated to Goddess Parvati. It is believed that Lord Shiva wandered the world carrying the body of Sati after she burned herself to death. During this process, her yoni, the female sexual symbol, fell at this place. King Pratap Malla built this temple in the 17th century. The temple name originates from guhya (cave) and ishwari (goddess). Non-Hindus are not allowed to enter this temple.
Image Courtesy of Wikimedia and unknown.
Sight description based on Wikipedia.
8

Kirateshwar Mahadeva temple is situated on the Bagmati river's west branch. If you visit this temple, you should know that traditional Nepali music concerts are held on full-moon nights. Nearby, in the cliffs, is the Surya Ghat cave. Also, you can climb the Kailash hill that offers a great view of the Pashupatinath area.
Image Courtesy of Flickr and mckaysavage.