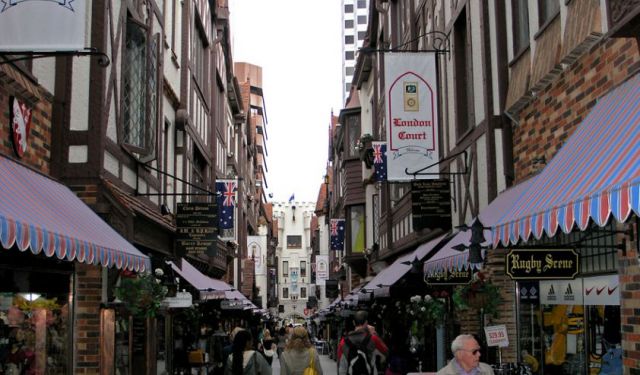 Image by SeanMack on Wikimedia under Creative Commons License.

This capital of Western Australia bewitches its visitors because of the many shopping areas. Shopaholics call this city shopping heaven. Perth is full of boutiques featuring well-known. We offer you a walking tour through some of the most interesting specialty shops and famous shopping streets in Perth:
How it works: Download the app "GPSmyCity: Walks in 1K+ Cities" from iTunes App Store or Google Play to your mobile phone or tablet. The app turns your mobile device into a personal tour guide and its built-in GPS navigation functions guide you from one tour stop to next. The app works offline, so no data plan is needed when traveling abroad.

Image by SeanMack on Wikimedia under Creative Commons License.
Sight description based on wikipedia
2

Allgem Jewelers has been creating unique and amazing jewelery for more than thirty years. It has a great collection of opals, pearls, gold nuggets and rare-colored diamonds. The staff of the store includes qualified gemstone specialists and valuers. Allgem Jewelers is an emeritus member of the Gemological and Jewelers Association of Australia.

Hay Street is a shoppers’ paradise. From renowned department stores and iconic high street brands, visitors will find what they are looking for. Hay Street and the adjoining laneways are closed to traffic, making the whole shopping experience relaxed. Besides shopping you can have fun in the bars and restaurants clustered around this street.
Image by Greg O'Beirne on Wikimedia under Creative Commons License.
4

Boffins Bookshop offers an outstanding choice of books in categories, such as business, art, humor, history, philosophy and other special interest literature. Boffins first opened its doors in 1989 and, since that time, has been one of the leading bookshops in Western Australia.

Recently employees of Chanel have been looking for property in Perth with King Street their first preference but with no space for rent or sale Chanel is looking elsewhere or waiting for space in the street. The street precinct is listed with the Heritage council of Western Australia.
Image by pat_ong on Flickr under Creative Commons License.
Sight description based on wikipedia
6

Quilpie Opals is a family-owned business, which is more than thirty years old. Opal is considered to be the National Gemstone of Australia. Its shape and color depend upon the region of the continent where it was extracted. This store is recognized all over the country for its service and quality of production.

Murray Street is one of four main east-west roads within the Perth central business district. The street, the central portion of which has become a pedestrian mall, was named after Sir George Murray, Secretary of State for War and the Colonies from 1828 to 1830. The strip has many popular shops lining the street. Recent development along Murray Street has seen the addition of a number of both national and international retailers.
Image by Greg O'Beirne on Wikimedia under Creative Commons License.
Sight description based on wikipedia
8