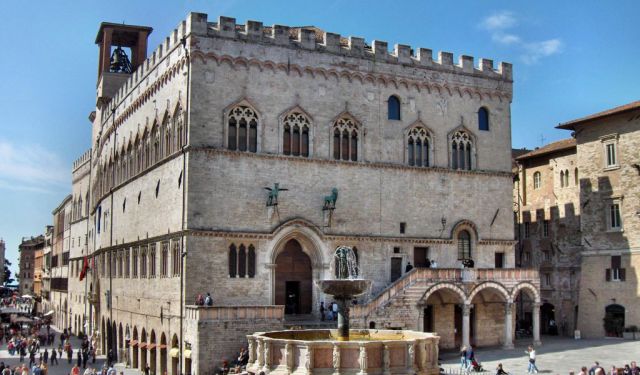 Dating back to the 3rd century BC, Perugia has a long history. This ancient city contains old arches, medieval gates, historic buildings and other valuable constructions, many of which can be found in the center of the city. Take the following tour to discover Perugia’s most prominent landmarks.
How it works: Download the app "GPSmyCity: Walks in 1K+ Cities" from iTunes App Store or Google Play to your mobile phone or tablet. The app turns your mobile device into a personal tour guide and its built-in GPS navigation functions guide you from one tour stop to next. The app works offline, so no data plan is needed when traveling abroad.

Piazza Cavallotti is built upon an archaeological site. Here you can see scraps of fabric from the Roman period, a stretch of road that can be traced back to the Augustan reconstruction and other unique things.
Image by Dcrjsr on Wikimedia under Creative Commons License.
2

2) Via Maesta delle Volte (must see)

Via Maesta delle Volte, an old picturesque street stretching from Piazza Cavallotti to Piazza IV Novembre, contains the ruins of the medieval Palazzo del Podesta. Destroyed by fire in 1534, remnants of a Gothic porch remain. Replaced by a Renaissance construction, its fresco of the Madonna from the 1330s was preserved. Nowadays it serves as a workshop selling sculptures and various objects made of wood.
Image by Basilio Speziari on Wikimedia under Creative Commons License.
3

Piazza IV Novembre, Perugia’s main square, is one of Italy’s most beautiful squares. It was the city’s center of public, political, civic and religious life for centuries. It is home to such prominent landmarks as Cathedral di San Lorenzo, Fontana Maggiore, beautiful for its elegant lines and harmony of form, the 15th century Logge di Fortebraccio and other outstanding buildings.
Image by G.dallorto on Wikimedia under Creative Commons License.
4

Palazzo dei Priori, built between the 13th and 15th centuries, is Perugia’s town hall. This Gothic construction is one of the city’s most prominent and precious landmarks. The portal, built in 1346, is adorned with sculptures representing the allegories of life, while the bezel site contains statues of the city patrons. It is also home to Sala dei Notari, which consists of eight arches with paintings and frescoes, and Galleria Nazionale dell'Umbria, one of Italy’s most outstanding art galleries. Nobile Collegio della Mercanzia, the offices of the Medieval Merchant's Guild, also stand in their original 14th century form here.
Image by Fantasy on Wikimedia under Creative Commons License.
5

Palazzo del Capitano del Popolo, also known as Palazzo del Bargello, was built in the second half of the 13th century and can be found on Piazza Matteotti. Built from 1472 to 1481 by Anthony Gasparino and Matthew Leone, interesting and valuable is its portal, decorated with twisted columns and topped by two griffins. You will also see a beautiful central sculpture of Justice, represented by a cryptically smiling woman armed with a sword. Combining medieval and Renaissance architecture, since the early 19th century it has served as Perugia’s courthouse.
Image by grahamwell on Wikimedia under Creative Commons License.
6

Nobile Collegio Del Cambio, the headquarters of the Exchange Guild, was built by Bartolomeo di Mattiolo and Lodovico di Antonibo between 1452 and 1457. The entrance is a wonderfully crafted work in wood dating back to 1505. Inside, you will find the finest examples of Renaissance art, old wooden furnishings, beautifully crafted woodworks, frescoes and paintings. One of its masterpieces is a self-portrait of Perugino, as well as the College Chapel, dedicated to St. John the Baptist and painted by Giannicola Paul, a pupil of Perugino.
Image by Georges Jansoone on Wikimedia under Creative Commons License.
7

Palazzo Baldeschi, located on Corso Vannucci, the main street of the historic center, is the former residence of Baldo degli Ubaldi, the famous Italian jurisconsult and law professor. Expanded during the 14th century, most of its adornments were added in the 19th century. Today it belongs to Cassa di Risparmio di Perugia and houses an outstanding art collection, as well as temporary exhibitions.
Image by Pierre Subleyras on Wikimedia under Creative Commons License.
8

Piazza Italia is a small square that is home to several tourist attractions, including the Monument to Vittorio Emanuele II, the last king of Sardinia and the first king of Italy, and Palazzo della Provincia, a government building erected in 1870.
Image by Francesco Gasparetti on Wikimedia under Creative Commons License.
9

Porta Marzia, one of Perugia’s seven gates in its Etruscan walls, is located in the southern section of fortifications, near Piazza Italia. Dating back to the 3rd century BC, it has a rounded arch and is decorated with five figures.
Image by Gaspa on Flickr under Creative Commons License.
10

If you walk down Via Oberdan you will find the stairs of San Ercolano and the San Ercolano Arch. This old construction dating back to the 14th century is an adaptation of the ancient Etruscan Gate.
Image by Giovanni Dall'Orto on Wikimedia under Creative Commons License.