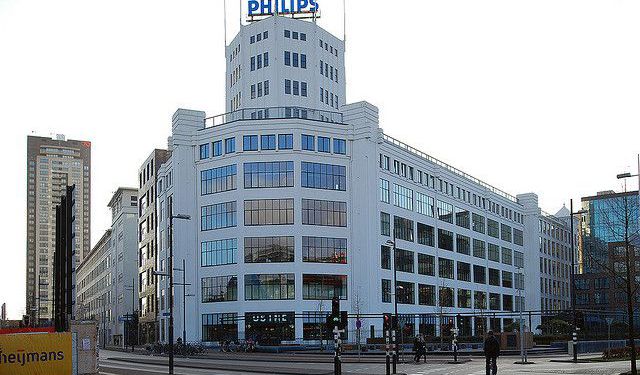 Eindhoven owes the Philips Company a big percentage of its fame and reputation. The Philips Company is a very important element in the city's history, culture and industry. The Eindhoveners are proud to have the Philips name linked to the most diverse places such as conference halls, museums and concert rooms, and to build sculptures to remember the people who changed the city's quiet existence and transformed it into a famous industrial centre. Visitors will be surprised by the rich history that stands behind the world renowned Philips brand.
Image Courtesy of Flickr and IK's World Trip.
How it works: Download the app "GPSmyCity: Walks in 1K+ Cities" from iTunes App Store or Google Play to your mobile phone or tablet. The app turns your mobile device into a personal tour guide and its built-in GPS navigation functions guide you from one tour stop to next. The app works offline, so no data plan is needed when traveling abroad.

The statue of the famous Anton Philips is located in front of the main railway station in Eindhoven. The creation of this central landmark belongs to Oswald Wenckebach - a Dutch painter and sculptor. He sketched it in 1951, shortly before his death. The statue represents Anton Philips - the co-initiator of the Philips Company and one of the main personages in the company's existence. He was the one who succeeded in promoting the company on an international level.
Image Courtesy of Wikimedia and P. van Galen.
2

The Frits Philips Statue is located in the Market Place in the center of Eindhoven. It was discovered for the people in 1997. The sculptor who worked on one of the favourite local monuments was Kees Verkade. Frits Philips' family was offered five models of the potential sculptures to choose from and they thought the present one was the most decent. The statue is entirely made of bronze and it is about three feet tall. The statue represents the nephew of one of the Philips Company's initiators - Gerard Philips. After a while, Frits himself became president of the company. Frits Philips died at the age of one hundred, in 2005.
Image Courtesy of Wikimedia and יעקב.
3

The Frits Philips Music Hall is a very well known and popular stage in the Netherlands and even outside the country. It was named in honour of the best Philips Company enterpreneur. It obtained its name in 1995, as a gift for the ninety year anniversary of Frits Philips. The concert hall hosts the most diverse performances, starting with jazz and ending with pop concerts. The acoustics of the hall are fantastic and its capacity is 160 thousand seats. There is a restaurant and cafe attached. Frits Philips Music Hall, besides offering grand concerts, can be visited as a tourist attraction where visitors are able to learn more about the hall's history.
Image Courtesy of Wikimedia and Mark Bergsma.
4

The Philips Incandescent Lamp Factory was the first Philips factory to create lamps. It was inaugurated in 1891. The initiator of the project was Gerard Philips, who rented the building and hired people to do manual work. After three years, the business was joined by Anton Philips, Gerard's brother, after which the factory started to expand and gain a reputation. In 1991 a brand new building was constructed across the road and the factory moved there. A red light representing the contact between the new and the old illuminated the road between the two buildings. In March, 2002 the structure was opened to the public as a museum. It is divided into two parts, one of which exposes paintings and sculptures somehow linked to artificial lighting and the second showing off machines and tools used for the manufacture of light bulbs, mostly invented by Philips. The museum is open from Tuesday to Sunday.
Image Courtesy of Wikimedia and Lempkesfabriek.
5

The White Lady, known also as the Witte Dame or the Philips Lighthouse is a building belonging initially to the Philips Company. The structure was built between 1928 and 1931 and its design was created by Dirk Roosenburg - a talented and well-known Dutch architect of that time. In the beginning, the company used the building for creating light bulbs. Around 1980 the structure was abandoned because Philips moved its manufacturing to an international level. Demolition was avoided and the building was exposed to a grand renovation process. Nowadays the White Lady houses diverse offices, shops and banks as well as the Philips Corporate Design offices, the MU gallery and the municipal public library.
Image Courtesy of Flickr and IK's World Trip.
6

The PSV Museum provides a wonderful day out for PSV fans. You will discover over one hundred years of PSV history. The Hall of Fame features the greatest players, including Jan van Beveren and samba star Romário. The most coveted prizes from the club’s history are on display and a visit to the PSV Museum enables you to experience that red and white feeling in an interactive way. There is a great collection of PSV memorabilia, special photos and unique video footage.


Image Courtesy of Wikimedia and FLX.
Sight description based on Wikipedia.
7

In the 1960s and 70s it attracted large visitor numbers, since its interactive exhibitions were a new and unique concept in the Netherlands at that time. But when competing science museums opened in other cities, the number of visitors to the Evoluon declined every year. After several years of losing money, the original museum closed down in 1989 and the Evoluon was converted into a conference center, opening in 1998.
Image Courtesy of Wikimedia and GVR.
Sight description based on Wikipedia.