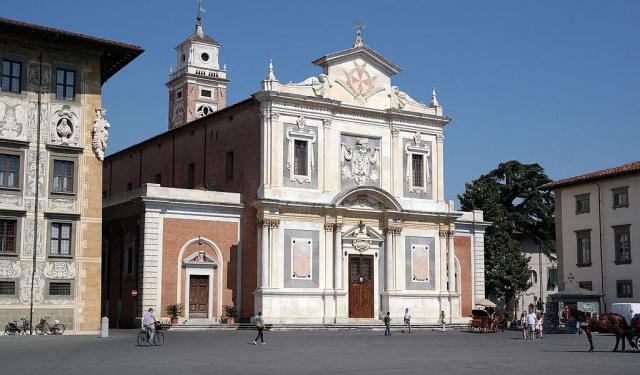 Image by Luca Aless on Wikimedia under Creative Commons License.

The city of Pisa is one of the richest in Italy when it comes to church heritage. This historic city is home to many great churches and cathedrals that have the most wonderful paintings, sculptures and architecture. Take our Churches Walking Tour to see the most beautiful houses of worship in Pisa.
How it works: Download the app "GPSmyCity: Walks in 1K+ Cities" from iTunes App Store or Google Play to your mobile phone or tablet. The app turns your mobile device into a personal tour guide and its built-in GPS navigation functions guide you from one tour stop to next. The app works offline, so no data plan is needed when traveling abroad.

The interior of the church features many banners won by the Order in their endless wars against Saracen pirates in the Mediterranean Sea. The main altar was built by Silvani, behind which a marvelous statue representing San Stefano as Pope with representations of Faith and Religion, sculpted in 1709 by Foggini. The wooden ceiling was placed in 1604 and has six painted panels depicting historic events of the Order. These panels were painted by Allori, il Cigoli, Ligozzi, and l’Empoli. The pulpit was built by Fancelli in 1627 and is decorated with paintings by Lomi. There are five monochrome paintings executed in 1588 showing stories of San Stefano, Pope and Martyr. The font was designed by Vasari and built by Fancelli in 1568. The Chapel of the Holy Sacrament was added in 1837 by Galli.

Image by Sailko on Wikimedia under Creative Commons License.
2

The Stretto Borgo is a long, narrow street with shops under the arcades on each side of it. In the midst of this street you will find the ancient San Michele in Borgo. The church and monastery was built in 1046 outside the city walls. According to documents written by its first abbot, he had been invited to Pisa to take over the Catholic Church of San Michele Arcangelo and turn it into a Benedictine monastery. As the Vatican wouldn’t release the church, he turned to the ruins of a Temple of Mars to build his monastery. From 1046 until the mid 12th century it was the home of the Benedictines. When they left, it was taken over by the monks from the Holy Hermitage of Camaldoli.

The façade was rebuilt in the 14th century, when three Gothic loggias were added to the upper storey and three Gothic portals were built. Above the central portal is the replica of a tabernacle containing a statue of the Madonna and Child by di Francesco. The original can be seen in the San Michele Museum. The interior is rather simple with a single nave and two aisles. The main altar is on a raised platform as under it is the crypt that belonged to the ancient temple. It once housed five antique sarcophagi, but these were later removed to the Camposanto Monumentale. The church has several fine paintings, including “Conception” by Rosselli, “Madonna with Child and the Saints” by Baccio Lomi, “The Virtues” by Aurelio Lomi and “Nativity” by Melani. There are also the remains of some of the original 13th century frescoes.

Image by Lucarelli on Wikimedia under Creative Commons License.
3

The crypt is to be found under the paved inlaid floor near the main altar. Before the church was built, the site was occupied by an early Christian temple that in turn had been built on the remains of a temple to Apollo. It has groin vaults with Roman capitals. You can see the remains of the original frescoes and an elaborately carved Roman sarcophagus.

Image by Paolo Fisicaro on Wikimedia under Creative Commons License.
4

Between the 12th and the 15th centuries the church was a priory and the home of the Order of Augustinian Sisters. The interior has a single nave and two aisles. The apse fell into ruins at the end of the 15th century and was later destroyed. Although the walls are now covered with posters announcing forthcoming cultural events, you can still see the magnificent frescoes and sinopias that were executed in the 12th and 13th centuries.
Image by Paolo Fisicaro on Wikimedia under Creative Commons License.
5

The bell tower was also repaired and rebuilt after the war. It was completed in 1236 and consists of a granite stele with narrow mullioned windows and a pyramid-like roof. Above the door inside is the family crest of Agostini della Seta, who was a patron and benefactor of the church. You will also be able to admire the “Martyrdom of Saint Cecilia”, painted in 1607 by Ventura Salimbeni.
Image by Sailko on Wikimedia under Creative Commons License.
6