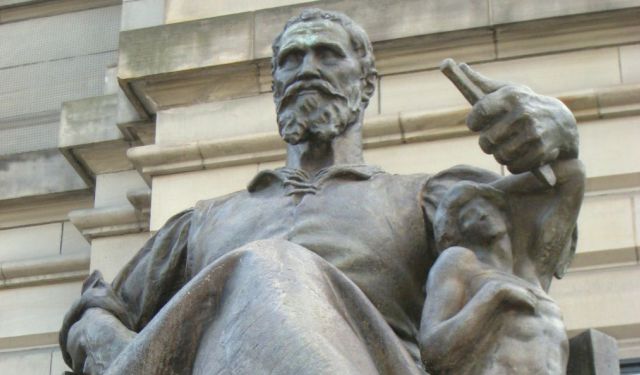 Pittsburgh is home to various museums which depict everything from history to modern art. Visitors may learn about the city’s early history at Senator John Heinz History Center and Fort Pitt Museum, appreciate installation art at Mattress Factory Museum, admire works of Andy Warhol at Andy Warhol Museum, and have fun at two other Pittsburgh museums dedicated to children. Pittsburgh is also home to a number of art galleries, all of which are worth a visit. This beautiful city offers the chance for visitors to admire and appreciate modern art, photography, and watercolor paintings.
How it works: Download the app "GPSmyCity: Walks in 1K+ Cities" from iTunes App Store or Google Play to your mobile phone or tablet. The app turns your mobile device into a personal tour guide and its built-in GPS navigation functions guide you from one tour stop to next. The app works offline, so no data plan is needed when traveling abroad.

The Carnegie Science Center, located in the Chateau neighborhood of the city, was opened in 1991. With a history that dates to October 24, 1939, the Carnegie Science Center is the most visited museum in Pittsburgh. Among its attractions are the newly constructed Buhl Digital Dome (which features the latest in projection), the Rangos Omnimax Theater, the Miniature Railroad & Village, the USS Requin (a World War II submarine) and roboworld, touted as "the world's largest permanent robotics exhibit" with more than 30 interactive displays featuring "all things robotic", including the first physical home for Carnegie Mellon University’s Robot Hall of Fame.

Image by Allie_Caulfield on Wikimedia under Creative Commons License.
Sight description based on wikipedia
2

The Mattress Factory Museum exhibits room-sized installation art by regional, national and international artists. The musuem is named for its gallery buildings, housed since 1977 in the former Stearns & Foster mattress factory and warehouse buildings at 500 Sampsonia Way in the Mexican War Streets area of Pittsburgh's Central Northside. Currently, the Mattress Factory receives about 38,000 visitors per year.

The Mattress Factory became a legal non-profit educational and cultural corporation in 1977, and the museum's first exhibition of installation art opened five years later on May 8, 1982. The Mattress Factory is a research and development lab for artists. As a museum of contemporary art, it commissions new site-specific works, presents them to the widest possible audience and maintains selected individual installations in a growing - and distinctive - permanent collection.

Image by Joan Miró on Flickr under Creative Commons License.
Sight description based on wikipedia
3

3) Children's Museum of Pittsburgh (must see)

The neighboring Buhl Planetarium building was vacated by 1991 when it was superseded by the nearby Carnegie Science Center. In the early 2000s, it was announced the museum would be expanding from the old Beaux Arts-style post office into the neighboring vacant Art Deco Buhl Planetarium. A plan was devised by Koning Eizenberg Architecture, Inc. to connect the two historic structures with a modern glass addition over what was a street called Allegheny Square. The street was vacated and realigned and the addition was built.

The Children's Museum of Pittsburgh presents a wide variety of programs for children in fields ranging from dance and rocket building to quilting and robotics. Visiting artists offer workshops in a host of media, including pottery, Japanese paper cutting, animation and painting. The Museum's extensive outreach program offers performances, workshops, after school programs, artist days and festival programs for schools and groups throughout the year.

Operation hours: Monday - Sunday 10 am – 5 pm.
Image by Allie_Caulfield on Wikimedia under Creative Commons License.
Sight description based on wikipedia
4

The Andy Warhol Museum is located on the North Shore of the city, near the intersection of Interstate 279 and Interstate 579. It is the largest museum in the United States dedicated to a single artist. The museum holds an extensive permanent collection of art and archives from the Pittsburgh-born pop art icon Andy Warhol. The Andy Warhol Museum is one of the four Carnegie Museums of Pittsburgh and is a collaborative project of the Carnegie Institute, the Dia Art Foundation and The Andy Warhol Foundation for the Visual Arts.

The museum is located in an 88,000-square-foot (8,200 m2) facility on seven floors. Containing 17 galleries, the museum features 900 paintings, close to 2,000 works on paper, over 1,000 published unique prints, 77 sculptures, 4,000 photographs, and over 4,350 Warhol films and videotaped works. Its most recent operating budget (2010) was $6.1 million. In addition to its Pittsburgh location the museum has sponsored 56 traveling exhibits that have attracted close to 9 million visitors in 153 venues worldwide since 1996.

Operation hours: Tuesday - Sunday: 10 am – 5 pm (Friday until 10 pm).
Image by Jared and Corin on Wikimedia under Creative Commons License.
Sight description based on wikipedia
5

The Senator John Heinz History Center, an affiliate of the Smithsonian Institution, is the largest history museum in the Commonwealth of Pennsylvania. Named after the late U.S. Senator H. John Heinz III (1938–1991), it is located in the Strip District of the city. The Heinz History Center is a 275,000-square-foot (25,500 m2) $36 million educational institution "that engages and inspires a diverse audience with links to the past, understanding in the present, and guidance for the future by preserving regional history and presenting the American experience with a Western Pennsylvania connection".

The History Center also operates Meadowcroft Rockshelter, a world-renowned archaeological site south of Pittsburgh near Washington County's Avella community. The Rockshelter is the oldest site of human habitation in North America, with evidence of man living there for nearly 16,000 years. The site was named a National Historic Landmark in 2005.

Operation hours: Daily: 10 am - 5 pm.
Image by Doug Coldwell on Wikimedia under Creative Commons License.
Sight description based on wikipedia
6

The African American Cultural Center presents all aspects of African American culture. The museum also features a large and permanent exhibition gallery. Last but not least, the center is home to classrooms, a 500-seat theater, gift shop, music cafe, and multipurpose areas.

SPACE is a Pittsburgh art gallery filled with fresh works from multiple disciplines, as well as presentations of modern artists outside the major city of Pittsburgh. The mission of SPACE is to promote a working model of an integrated and open art system in Pittsburgh.

Fort Pitt Museum is an indoor/outdoor museum that is administrated by the Senator John Heinz History Center in downtown of the city. It is surrounded by Point State Park, a Pennsylvania state park named for the geographically and historically significant point that is between the rivers. This piece of land was key to controlling the upper reaches of the Ohio River Valley and western Pennsylvania, before, during and after the French and Indian War as well as the American Revolution.

The museum is in a recreated bastion of Fort Pitt, which was originally built in 1758 by the British. An outline of Fort Duquesne is nearby. The historical focus of the museum is the role that Fort Pitt played during the French and Indian War. The museum also features detailed information on Fort Pitt's role during the American Revolution, the Whiskey Rebellion and the founding of Pittsburgh.

The museum was established and operated by the Pennsylvania Historical and Museum Commission until its closure in August 2009 from state budget cuts. The Heinz Center took over operation of the museum and reopened it in April 2010.

Operation hours: Daily 10 am - 5 pm.
Image by Photojunkie on Wikimedia under Creative Commons License.
Sight description based on wikipedia

Pittsburgh features a rich history and is home to various religious buildings and places of worship. Several of the city’s churches represent historic landmarks and date back to the 19th century. Religious buildings like these are open to the public and highly recommended during your visit.