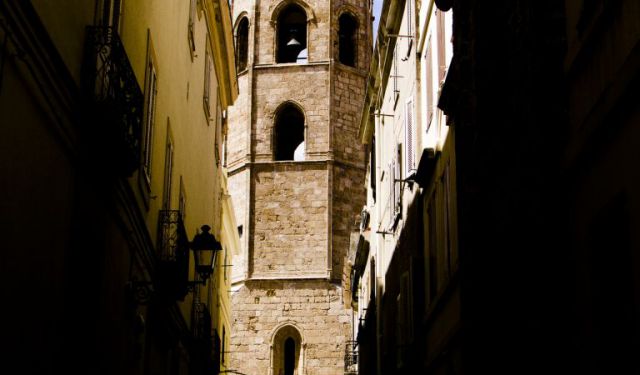 Image by proteusbcn on Wikimedia under Creative Commons License.

Places of Worship Tour of Alghero (Self Guided), Alghero

There are numerous historic churches and cathedrals in Alghero of incomparable design and beauty. Take this walking tour to admire Alghero's Old Town and its ancient places of worship.
How it works: Download the app "GPSmyCity: Walks in 1K+ Cities" from iTunes App Store or Google Play to your mobile phone or tablet. The app turns your mobile device into a personal tour guide and its built-in GPS navigation functions guide you from one tour stop to next. The app works offline, so no data plan is needed when traveling abroad.

St. Anne's Church was built in 1735 and is dedicated to St. Anne. A large wooden door and two pilasters occupy the principal part of the facade. The church is an architectural monument and is not open for worship.
Image by House Of Sims on Flickr under Creative Commons License.
2

Alghero Cathedral is a Roman Catholic cathedral was the seat of the Bishop of Alghero from 1503 to 1986, and since 1986 has been that of the Bishop of Alghero-Bosa. Alghero was designated as a diocesan seat in 1503 but construction work on the cathedral did not begin until the 1530's. It was not opened until 1593, and not finished and consecrated until 1730. It is the burial site of the Italian born Duke of Montferrat (1762-1799) and his brother Count of Asti (1766-1802) who died on the island having caught malaria. The church was originally in Catalan-Gothic style, as can be seen in the five chapels and ambulatory of the presbytery, which also includes the octagonal base of the bell tower. The nave and the two aisles are however in Late Renaissance style. In the 19th century a Neo-Classical narthex was added to the facade, which dramatically changed its appearance.

Image by Stahlkocher on Wikimedia under Creative Commons License.
Sight description based on wikipedia
3

The Polish Orthodox Church is the only one of its kind in Sardinia. Morning and evening services are held here. The church is located on Via Carlo Alberto. It blends in with the surrounding buildings, so you'll have to be vigilant while looking for it.
Image by bobosh_t on Flickr under Creative Commons License.
4

Dating back to 1360 and rebuilt in the late 16th century, St. Francis Church is one of the greatest examples of the Gothic-Catalan style in Sardinia. Original Catalan-Gothic parts can be seen over the high altar, the presbytery chapels and the San Sacramento Chapel. The building is made of stone and is characterized by its bell tower from the first half of the 16th century. The facade is ornamented with a lintel of classic style, in which is carved the emblem of the Franciscans surrounded by angels.
Image by wiseguy71 on Flickr under Creative Commons License.
Sight description based on wikipedia
5

Our Lady of Carmine Church is located in one of the most picturesque places of historic Alghero. It was built in the 17th century. The Baroque altar and the wooden pulpit enrich the interior design of the church. The church belonged to the Carmelite Monastery, which has since been transformed into private residences.
Image by abcdz2000 on Flickr under Creative Commons License.
6

Our Lady of Mercy Church is a Roman-Catholic church located near Piazza della Misericordia. It is a classically-designed building that has retained its unique tower bells. Although the structure is beautiful, it is in need of restoration.
Image by Sailko on Wikimedia under Creative Commons License.
7

Saint Michael’s Church is one of the most important Baroque-style buildings in Sardinia. In 1503 Alghero was designated as a diocesan seat, but the church did not open until 1593. The exterior of the building is accentuated by a plinth of squared blocks. The church is recognized for its colorful and uniquely designed dome.
Image by david.nikonvscanon on Flickr under Creative Commons License.
8

Our Lady of Mercy Parish is located in Piazza della Mercede. The building is made of stone with large stained-glass windows gracing each side of the exterior. In the garden of the parish there is the tower bell. Parking is available here.
Image by SimonDeanMedia on Flickr under Creative Commons License.

Create Your Own Walk in Alghero

Creating your own self-guided walk in Alghero is easy and fun. Choose the city attractions that you want to see and a walk route map will be created just for you. You can even set your hotel as the start point of the walk.

Alghero is an attractive city overlooking the sea. This unique city sits on the island of Sardinia, at the place where the Sardinian and Catalan people united. Take this self-guided tour to admire the most stunning points of interest in Alghero.

The historic city of Alghero is home to some of the most significant architectural monuments in Italy. The city's palaces are beautiful examples of the culture and architectural style of centuries past. Take this tour to explore Alghero’s narrow, picturesque streets and its legendary palaces.

Old Town Alghero is a maze of narrow, paved streets lined with fabulous specialty shops selling art, jewelry, clothing and tasty treats. Take this tour to discover some of the most remarkable Algherian shops.

Alghero is a beautiful city that is a wonderful mixture of the old and modern. The gardens, markets, restaurants and beaches of Alghero are just some of the attractions that make the city colorful and full of fun. Take this tour to get a sense of a day in the life of Alghero residents.