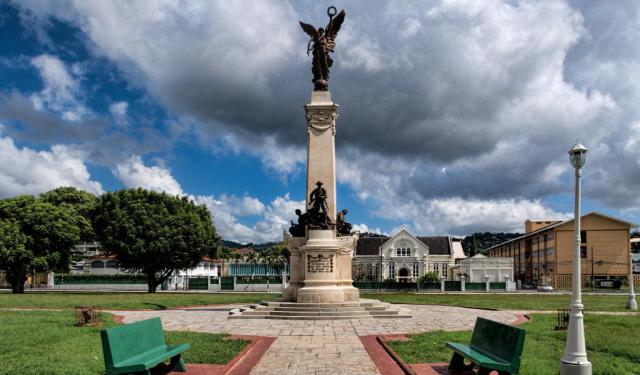 Image by Claude Fletcher on Flickr under Creative Commons License.

Trinidad and Tobago's main city of Port of Spain has no shortage of historic buildings, each with its own fascinating story. Take this self-guided walking tour to explore the city's most notable "Magnificent Seven" landmarks set around Queen's Park Savannah including Queen's Royal College, a fairy-tale looking Stollmeyer's Castle, the White Hall and others.
How it works: Download the app "GPSmyCity: Walks in 1K+ Cities" from iTunes App Store or Google Play to your mobile phone or tablet. The app turns your mobile device into a personal tour guide and its built-in GPS navigation functions guide you from one tour stop to next. The app works offline, so no data plan is needed when traveling abroad.

Still regarded as the bastion of secondary school education Queen's Royal College is the oldest secondary school in the city. The college is noted for its famous German Renaissance architecture and tradition of multi-faceted education which continues to produce some of Trinidad and Tobago's leading thinkers, athletes, artists and politicians.

The foundation stone of the building was laid on 11 November 1902 by Courtney Knollys, who was the acting Governor of the day. The structure was designed by Daniel M. Hahn, who was Chief Draughtsman of the Public Work Department and a Old Boy of Queen's Royal College, during the period when the school was housed at the Princess Building. Constructed at a cost of 15000 British pounds, the original building accommodated six classes for 30 boys each.

The lecture hall could hold over five hundred persons at a time. Notwithstanding the German origin of the plan, a legacy perhaps of Mr Hahn's student days in Berlin, the design of the interior is very definitely tropical with a delightfully aristocratic touch from the days when European school architecture was austere. QRC was not free at some point but after a couple years it became free.

Image by adpowers on Flickr under Creative Commons License.
Sight description based on wikipedia
2

Another building from the "Magnificent Seven" list is Hayes Court, the official residence of the Bishop of Anglican Church of Trinidad and Tobago. The house is named after Bishop Hayes who served at the end of the 19th century. The unpretentious, yet stern, look of the house takes its architectural inspiration from French and English house designs.
Image by St Boniface's Catholic College on Flickr under Creative Commons License.
3

A building of historical significance, the castle-house of Mille Fleurs was built at the beginning of the 20th century as a present from Enrique Prada to his wife. Mr Prada is known to have had interest in architecture and, together with a local construction company, he actively participated in the designing and building of Mille Fleurs that features a French provincial style with some elaborate carvings and other decorations. Throughout its history, the house had seen many owners until 1979 when Trinidad and Tobago's government bought it for official purposes.
Image by Angelo Bissessarsingh on Flickr under Creative Commons License.
4

Ambard’s House was built at the beginning of the 20th century by French architect Lucien Ambard. The beautiful house, also popularly known as Roomor, has the nickname derived from a combination of two names, Roodal and Morgan, the families that once lived there. The materials used in the house construction were brought from Italy and France. Ambard’s House has some lovely decorative features, such as colorful carvings, marble ornaments and iron cast elements. Today, Ambard’s House is the only building from the “Magnificent Seven” to remain a private residence.
Image by Mark Morgan on Flickr under Creative Commons License.
5

Built in 1904, The Archbishop's Palace is the seat of the Archbishop of Roman Catholic Church of Trinidad and Tobago. The beautiful complex features a Romanesque-Irish design. The current resident of the Palace is Edward Gilbert, the country's 9th Archbishop. In the middle of the 20th century some of the building's floors and walls were remodeled with extra care taken to preserve the Palace's original design. The Archbishop's House is sited among the "Magnificent Seven", the most notable buildings of Port of Spain.
Image by Rennett Stowe on Flickr under Creative Commons License.
6

The White Hall was built in 1904--same year as most of the “Magnificent Seven” buildings--by merchant Joseph Leon Agostini, featuring a Moorish Mediterranean style. Joseph Agostini’s family originates from Corsica, hence the White Hall's resemblance to the architectural style of Southern Italy and Corsica. During its history the building has housed the British Council Cultural Center, the Trinidad and Tobago Central Library, and governmental offices.
Image by Chris Fitzpatrick on Wikimedia under Creative Commons License.
7

The magnificent Scottish Baronial design of Stollmeyer’s Castle is attributed to Scottish architect Robert Gillies. Once the home of the Stollmeyer family, it is also known as Killarney. Today, the castle is used as Prime Minister’s office. The robust structure and elaborate design have assured the castle its place among the “Magnificent Seven” buildings.
Image by Claude Fletcher on Flickr under Creative Commons License.
8

President's House is the official residence of the President of Trinidad and Tobago. The house is located next to the Botanical Gardens in Port of Spain. The house was built in 1876, however a previous building on the site, known as "The Cottage" was used as the Governor's residence from 1867. The stonework facade of the 1876 construction is made local blue limestone, while the roof is covered with Welsh Dutchess slate. The building contains Italian-style arched doorways and loggias, as well as Victorian-style columns and railings.

Today, as well as being the President's private residence, the house is used for national awards and swearing-in ceremonies, as well as diplomatic receptions. The President's office is located in a separate building in the grounds of the house.

Image by Mike Hanson on Flickr under Creative Commons License.
Sight description based on wikipedia

Walking Tours in Port of Spain, Trinidad and Tobago

Create Your Own Walk in Port of Spain

Creating your own self-guided walk in Port of Spain is easy and fun. Choose the city attractions that you want to see and a walk route map will be created just for you. You can even set your hotel as the start point of the walk.

Port of Spain, the capital city of Trinidad and Tobago, is a famous destination renowned for many reasons, including music, cuisine and the annual Carnival, a cultural event bringing to the island thousands of tourists. As a major shipping and financial hub of the Caribbean, the city's skyline is dominated by skyscrapers, of which the most prominent is the iconic Nicholas Tower. To explore...  view more

Shopping Tour in Port of Spain

Port of Spain is a city of great shopping opportunities. Whether you are shopping for memorable souvenirs, gifts to take home or famous designer labels--the city has plenty of options to offer. Apart from large shopping arcades, most of the Port of Spain streets boast a wide range of specialty shops and street vendors selling hand-made jewelry and other local crafts. By taking this tour you will...  view more

Trinidad and Tobago's capital Port of Spain is a lovely city with interesting history, duly reflected in its diverse architectural heritage. The city, commonly referred to by locals as Mucura, has several charming and perpetually busy squares, beautiful green parks, intriguing old streets and a modern financial district. The following walking tour will guide to the city's most prominent...  view more