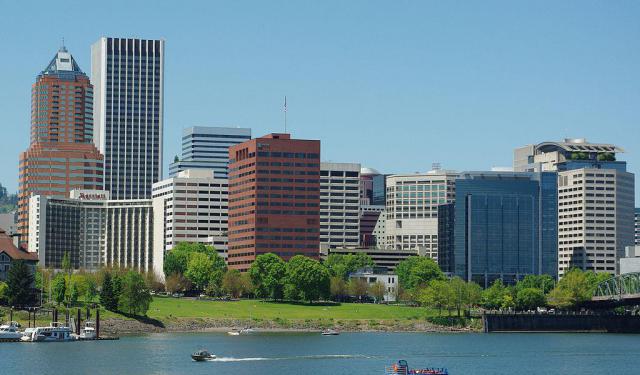 Image by Stuart Seeger on Flickr under Creative Commons License.

The largest city in the U.S. state of Oregon, Portland sits on the banks of two rivers (Columbia and Willamette) and is renowned for its eco-friendly approach manifested in lots of parks, bridges and cycling paths. It is also home to beautiful urban architecture and theme museums. These and other attractions have made up this orientation tour.
How it works: Download the app "GPSmyCity: Walks in 1K+ Cities" from iTunes App Store or Google Play to your mobile phone or tablet. The app turns your mobile device into a personal tour guide and its built-in GPS navigation functions guide you from one tour stop to next. The app works offline, so no data plan is needed when traveling abroad.

Pioneer Courthouse Square, also known as Portland's living room, is a public space occupying a full 40,000-square-foot (3,700 m2) city block in the center of downtown Portland, Oregon, United States. Opened in 1984, the square is bounded by Southwest Morrison Street on the north, Southwest 6th Avenue on the east, Southwest Yamhill Street on the south, and Southwest Broadway on the west.

On Morrison and Yamhill streets (the north and south boundaries of the square) are sheltered MAX Light Rail stops. On the north side is an artistic feature, consisting of towering classical columns which progressively topple over like those of an ancient ruin. There are outdoor chess tables on some of the toppled columns; chess players frequently congregate there during the day. A fountain, taking the form of a cascading waterfall, on the west side of the square frames the entrance to a public information center and TriMet ticket office. The center of the square is arranged like an amphitheater, with a semicircle of approximately two dozen steps serving as seats when the square is used for musical performances or other events.

Image by Cacophony on Wikimedia under Creative Commons License.
Sight description based on wikipedia
2

The Oregon Historical Society Museum is a history museum housed at the Oregon History Center in downtown Portland. The museum was created in 1898 and house about 44,000 visitors annually. It houses the Portland Penny that decided the city’s name. This 1835 copper penny was flipped to decide between the names of Boston and Portland, with Portland as the winner.

The museum contains over 85,000 artifacts relating to the history of the region, and is accredited by the American Association of Museums. Artifacts include Captain Robert Gray's storage chest from aboard the Columbia Rediviva, a 10,000 year old sandal, memorabilia from the Lewis and Clark Centennial Exposition, Native American artifacts, a miniature vehicle collection, and many everyday items from jars to dresses.

Permanent exhibits at the museum include: Oregon My Oregon; Battleship Oregon: Bulldog of the Navy; and Oregon Art. The Oregon History Center also contains the society’s research library and historic photograph collection. Additionally, the museum store sells items such as books and history memorabilia. The museum is accredited by the American Association of Museums.


Image by Aboutmovies on Wikimedia under Creative Commons License.
Sight description based on wikipedia
3

The Portland Art Museum was founded in 1892, making it the oldest art museum on the West Coast and seventh oldest in the United States. Upon completion of the most recent renovations, the Portland Art Museum became one of the twenty-five largest art museums in the United States, at a total of 240,000 square feet (22,000 m²). The permanent collection has more than 42,000 works of art, and at least one major traveling exhibition is presented most of the time.

The Portland Art Museum features a center for Native American art, a center for Northwest art, a center for modern and contemporary art, permanent exhibitions of Asian art, and an outdoor public sculpture garden. The Northwest Film Center is also a component of Portland Art Museum. The museum was founded in late 1892 when seven leaders from Portland's business and cultural institutions signed the letters of incorporation creating the Portland Art Association. The goal of the Association was to create a first-class art museum that would be accessible to all citizens.

The museum purchased its first collection of some one hundred plaster casts of Greek and Roman sculptures with its first gift from prominent local citizen Henry Corbett, who donated $10,000 for the acquisition. The museum's final location opened to the public on November 18, 1932, at the corner of SW Park Avenue and Jefferson Street. The building, designed by noted Portland architect Pietro Belluschi, is situated along downtown Portland's South Park Blocks and remains a landmark in the city's Cultural District.

St. James Lutheran Church was the first English-speaking Lutheran Church in Oregon and had its beginning in 1890 in a modest wooden chapel on the corner of SW Park and Jefferson streets in downtown Portland. Over a century later, several changes have taken place. The church has grown from the small, ascetic edifice to a building complex that covers over half of a city block. The Pioneer Chapel was raised in 1891 and the main sanctuary was finished in 1907. The education building was built in 1956. And, finally, the St. James Apartment complex was completed in 1994. Over the years St. James grew not only in size, but in reaching its goal of helping people find themselves.
Image by Werewombat on Wikimedia under Creative Commons License.
5

We present you the tallest building in Portland and the State of Oregon. The tower has 546 feet height with 40 floors of available office surface.

The tower is the regional headquarter of the Wells Fargo Bank and the main lobby is home to a genuine 1870 Wells Fargo Stagecoach.

Marble is the keyword for the architectural style of this huge building. The exterior is made of columns of black glass divided by columns of white marble from bottom to top.
Image by Cacophony on Wikimedia under Creative Commons License.
6

"The Mechanical Pencil", as it's often called, the KOIN Center is the proof how broadcasting companies can affect the city's shape through architecture. The name comes from the most prominent TV company that it hosts, KOIN television.

It's construction rose controversy through locals, since it blocks the view to Mount Hood, the mountain near Portland, but also in time it became one of the city icons.

KOIN Center is the third tallest building in Portland.
Image by Cacophony on Wikimedia under Creative Commons License.
7

If you want to know more about the rich river history of Oregon, the Oregon Maritime Museum is where you should visit. Portland was initially founded as a river port, and this museum demonstrates the vital importance of the past, present and future maritime heritage of Oregon.
Image by Mafue on Flickr under Creative Commons License.
8

A Ming Dynasty style garden, it's the place in Portland to find peace and harmony. It's construction finished on September 14, 2000, due to the sisterhood of Portland and Suzhou, though efforts were made before too. You will find there a teahouse built by chinese artisans, an artificial lake and over 400 species of chinese flora. It's said that having a walk there, you won't find two places the same.
Image by lightmatter on Flickr under Creative Commons License.

For many years Portland has been famous for the development of its parks, forest areas and green spaces for the benefit of people who love and understand the value of nature. Sharing Portland's nature with your family will lead to the creation of treasured memories. Take this tour to meet the inhabitants of the Oregon Zoo, to see the smile on your child's face at the Portland...  view more

Portland offers visitors a considerable array of museums to visit and enjoy. Safeguarding important artifacts, telling the stories of the area's past and current inhabitants, and highlighting aspects of life in Portland, the museums on this next walking tour are certain to entertain and educate you.