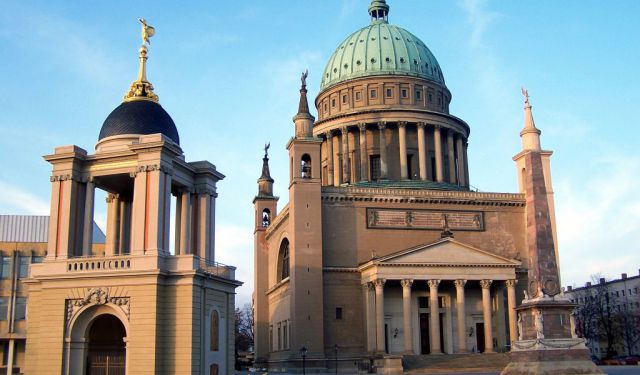 Image by Andreas Fränzel on Wikimedia under Creative Commons License.

Potsdam is considered one of the most beautiful cities in all of Germany. You can feel history in the air while you walk among the city's well preserved buildings. Most of the structures have been recently renovated and are ready to impress you with their grandeur and style. Take this tour to discover Potsdam's most architecturally stunning buildings.
How it works: Download the app "GPSmyCity: Walks in 1K+ Cities" from iTunes App Store or Google Play to your mobile phone or tablet. The app turns your mobile device into a personal tour guide and its built-in GPS navigation functions guide you from one tour stop to next. The app works offline, so no data plan is needed when traveling abroad.

The building that is today the Potsdam Town Hall is located in the center of the city. This impressive complex was built at the end of the 18th century in the Rococo style. Six domes dominate the structure and accentuate its grandeur. Its majesty can also be seen in the beautiful sculptures adorning the exterior.
Image by Expdm on Wikimedia under Creative Commons License.
2

The Dutch Quarter, also known as the Holland Quarter, is one of the most popular landmarks in Potsdam. There is no other place in Europe like Potsdam's Dutch Quarter, where about 150 red-brick, Dutch houses occupy four city blocks, which are arranged in two quarters. The houses were built between 1734 and 1742 by the famous Dutch architect Jan Bouman.
Image by Liglioto on Wikimedia under Creative Commons License.
3

The Catholic Church of Saint Peter and Paul is located in the heart of Potsdam. The church was built in 1870 and was designed by two German architects August Stüler and Wilhelm Salzenberg. The building is a great example of the eclectic style popular at the end of 19th century, as it contains both Byzantine and Romanesque elements. The bell tower is almost 63 meters high and its design was inspired by St. Zeno, located in Verona, Italy. Inside Saint Peter and Paul Church you can admire three masterpieces by famous painter Antoine Pesne.
Image by DrMeier on Wikimedia under Creative Commons License.
4

Image by Suse on Wikimedia under Creative Commons License.
Sight description based on wikipedia
5

The Old Town Hall is located on Old Market Square near the Church of Saint Nicholas. This administrative building was designed and erected by the famous architect Johann Boumann between the years 1753 and 1755. Many of the buildings in Potsdam incorporate the Italian style, and the Old Town Hall is not an exception. The gilded statue of Atlas stands sublime on the edge of the building's dome.
Image by Doris Antony on Wikimedia under Creative Commons License.
6

Acht Ecken (Eight Corners) is the name of a former architectural complex. At the intersection of Schwertfegerstraße and Friedrich-Ebert-Straße, four identical Baroque houses were built on the corner plots in 1771 by Bayreuth architect Carl von Gontard. Each building was designed with a concave facade towards the crossroads, resulting in eight corners in total. Today, only one of the four buildings is left. Friedrich-Ebert-Straße was turned into a wide traffic artery after the destruction of WWII, which necessitated the demolition of the two eastern buildings. The southwestern property was replaced with a modern prefab concrete building in the 1960s.
Image by Sybillesonne on Wikimedia under Creative Commons License.
Sight description based on wikipedia
7

7) House of Brandenburg-Prussian History (must see)

The House of Brandenburg-Prussian History is located in a historic building that is the former Royal Carriages Garage of City Palace (Stadtschloß). The garage was built at the same time as the palace complex in 1662. It was one of the few buildings remaining after the bombing of 1945. The building has been thoroughly restored, and today you can admire this structure, which has stood on this spot for more than 350 years.
Image by unify on Wikimedia under Creative Commons License.
8

The Großes Militärwaisenhaus was built in 1771. This four-story building was designed in the Prussian late-Baroque architectural style. On the roof of the building is a temple-like construction that consists of eight columns on top of which stands the sculpture of “Caritas”. This 26-meter-high structure was created by architect Rudolf Kaplunger.
Image by Olaf Oehlsen on Wikimedia under Creative Commons License.
9

Dampfmaschinenhaus is the steam pump house that was built between 1841 and 1843. It is not an ordinary pump house, and you should visit in order to appreciate its design and history. The structure resembles a mosque and is architecturally stunning. It was the first pump house built in Prussia. Frederick Wilhelm IV wanted water pumped from the Havel River to the beautiful fountains of Sanssouci Park, so he had the pump house constructed.
Image by I G on Flickr under Creative Commons License.
10

10) Protestant Church of Peace (must see)

The Protestant Church of Peace (German: Friedenskirche) is situated in the Marly Gardens on the Green Fence in the palace grounds of Sanssouci Park. The church was built according to the wishes and with the close involvement of the artistically gifted King Frederick William IV and designed by the court architect, Ludwig Persius. After Persius' death in 1845, the architect Friedrich August Stüler was charged with continuing his work. Building included work by Ferdinand von Arnim and Ludwig Ferdinand Hesse also. The cornerstone of the churchhouse was laid on April 14, 1845. The building was dedicated on September 24, 1848, though construction continued until 1854. The structure resembles a High Italian monastery.

The church is a columned basilica with three naves and no transept, with a free-standing belltower. The 13.5 m high central nave overlaps the side aisles, which are half as wide. An arcade of central arches mark the crossing point. An etching of the Basilica di San Clemente in Rome made by early Christians resembles a draft design of the Potsdam church.

An original Venetian mosaic from the early 13th century decorates the church's apse. It was originally in a church in San Capriano on Murano, Venice until its abandonment. While he was crown prince Frederick William had it bought at auction for 385 thalers and brought to Potsdam by canal.

Image by Wolfgang Staudt on Wikimedia under Creative Commons License.
Sight description based on wikipedia