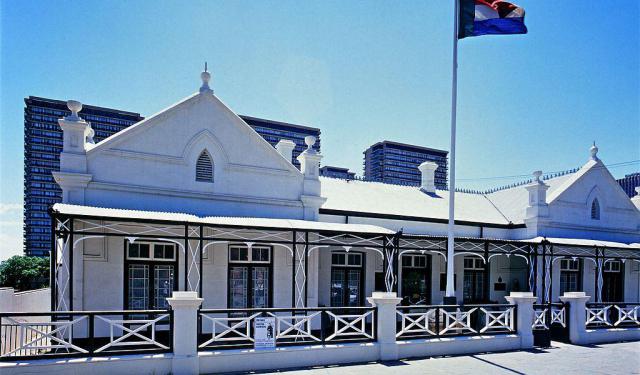 Image by Janek Szymanowski on Wikimedia under Creative Commons License.

As one of South Africa's capital cities, Pretoria has many museums that will lead you through the history of the country and teach you about its cultural and natural treasures. Don't miss a chance to visit some of the museums for which the city Pretoria is famous.
How it works: Download the app "GPSmyCity: Walks in 1K+ Cities" from iTunes App Store or Google Play to your mobile phone or tablet. The app turns your mobile device into a personal tour guide and its built-in GPS navigation functions guide you from one tour stop to next. The app works offline, so no data plan is needed when traveling abroad.

Kruger House is the historic Pretoria residence of the President of the South African Republic, Paul Kruger (1825-1904). It was built in 1884 by architect Tom Claridge and builder Charles Clark. Milk was used instead of water for mixing the cement from which the house was constructed, as the cement available was of poor quality. The house was one of the first in Pretoria to be lit by electricity. The house contains either the original furnishings or items from the same historical period, some of the many gifts that were presented to Kruger, and other memorabilia. An interesting feature of the house is the pair of stone lions on the veranda that were presented to President Kruger as a birthday gift in 1896 by the mining magnate Barney Barnato. The Kruger House is now a house museum that tries to recreate the ambience of the period in which Kruger lived.
Image by joonasl on Flickr under Creative Commons License.
Sight description based on wikipedia
2

The National Cultural History Museum, also known as the "African Window," is located in the Old Mint. It is called the most dynamic museum in the city because of its constantly changing exhibitions. The museum houses a collection of at least five million objects related to the history and culture of South Africa, from the stone age to the present, and from both the indigenous peoples and European colonists.
Image by Borisgorelik on Wikimedia under Creative Commons License.
3

Image by stuart001uk on Flickr under Creative Commons License.
Sight description based on wikipedia
4

Melrose House is a stately Victorian mansion that was built in 1886 by the prosperous Pretoria businessman George Jesse Heys. It was named after the famous Melrose Abbey in Scotland. Melrose House gained fame during the Second Boer War (1899–1902), when Lord Roberts requisitioned it as the headquarters for the British forces after Pretoria was captured in June 1900. Today, this elegant house is a museum that represents the transition from Victorian to Edwardian architectural styles and interiors. The interior is characterized by colorful stained glass windows, paintings by English artists, carpets in rich colors, ornate ceilings and fireplaces, and valuable porcelain ornaments. The majority of these items were the property of the Heys family.
Image by Țetcu Mircea Rareș on Wikimedia under Creative Commons License.
Sight description based on wikipedia
5

Image by Laurens on Wikimedia under Creative Commons License.
Sight description based on wikipedia