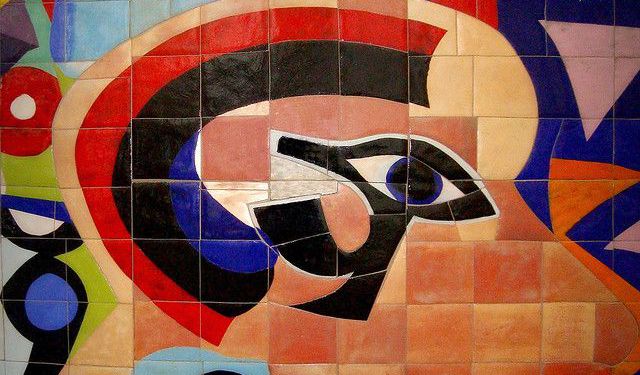 Image by Christopher Gosselin on Flickr under Creative Commons License.

Providence is a creative city that is home to numerous art galleries and studios. On your trip to Providence, you can view important pieces from the past, as well as cutting edge work from modern artists. Take this tour to visit Providence's most notable art galleries.
How it works: Download the app "GPSmyCity: Walks in 1K+ Cities" from iTunes App Store or Google Play to your mobile phone or tablet. The app turns your mobile device into a personal tour guide and its built-in GPS navigation functions guide you from one tour stop to next. The app works offline, so no data plan is needed when traveling abroad.

Gallery Z was established in 2001 by photographer Berge Ara Zobian. The gallery hosts permanent and temporary exhibitions, and it frequently organizes events. Its collection includes 20th-century and modern art. Gallery Z is located on Federal Hill and is open Thursday – Saturday from 12:00 p.m. to 8:00 p.m and Sunday 12:00 pm -6 pm.
Image by Scewing on Wikimedia under Creative Commons License.
3

New Urban Arts is a studio and gallery that works with local students to develop their skills and creativity. The gallery was established in 1997 and has since helped more then 950 students. In 2009, New Urban Arts was awarded the 'Coming Up Taller' award by First Lady Michelle Obama. The gallery is open Monday - Friday from 9:00 a.m. to 7:00 p.m.
Image by Amandajm on Wikimedia under Creative Commons License.
4

AS220 is a non-profit community arts center located at 115 Empire Street in Downtown of Providence. AS220 maintains four dozen artist live/work studios, around a dozen individual work studios, four rotating exhibition spaces, a performance space, a black box theatre, a dance studio, a print shop, a community darkroom and digital photo lab, a high-tech fabrication lab, an organization-run bar and restaurant, a recording studio, and a youth program, AS220 Youth (formerly named the Broad Street Studio).

AS220 was founded in 1985 by Umberto Crenca, Susan Clausen, and Scott Seabolt as a space for artists and performers in the realms of visual art, music, dance, and writing to exhibit their work and be experimental. They sought to create a forum without the pretension or curatorial constraints of the traditional art world.

In 1992, AS220 acquired its own 21,000 square foot building on 95-121 Empire Street, which it renovated in order to create a space for a mixed-use arts complex including resident artists, Groundwerx Dance Company, and the Perishable Theater. The Empire Street complex at AS220 draws in an estimated 50,000 people per year. It houses the AS220 Performance Space, The AS220 Bar, AS220 Foo(d), the AS220 Youth Studio, a darkroom, three gallery spaces, and twenty resident/work studios for artists.

Image by David Hilowitz on Flickr under Creative Commons License.
Sight description based on wikipedia
5

URI Feinstein Providence Campus Gallery organizes art exhibitions that center around themes such as breast cancer awareness, human rights and HIV/AIDS. The exhibitions are open to the public. The gallery's hours are Monday – Thursday from 9:00 a.m. to 9:00 p.m. and Friday - Saturday from 9:00 a.m. to 4:00 p.m.
Image by Philipp Röth on Wikimedia under Creative Commons License.
6

Bert Gallery was established in 1985 by Hugo Bert and Catherine Little Bert. The owners' mission is to showcase beautiful artwork from the region. The initial focus was on post-1950 contemporary art, but the gallery has since expanded its collection to include 19th-century pieces. The gallery is open Thursday – Saturday from 10:00 a.m. to 4:00 p.m.
Image by Waterproof947 on Wikimedia under Creative Commons License.