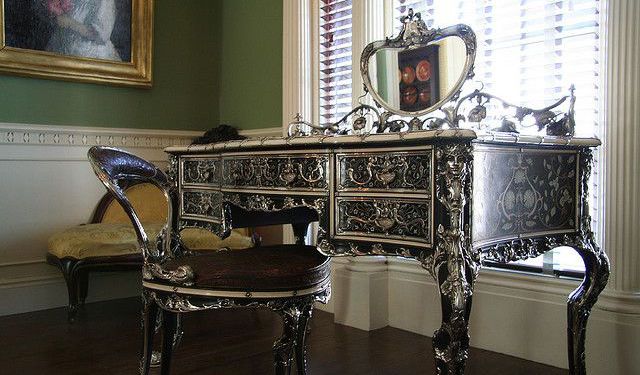 Image by MCS@flickr on Flickr under Creative Commons License.

Providence was established in 1636 and is one of the original thirteen colonies of the U.S. The city has a long history, and over the years has been home to many well-known artists, politicians, writers and more. This fascinating heritage is reflected in the city's numerous museums and historic houses. Take this tour to visit the best museums the city has to offer.
How it works: Download the app "GPSmyCity: Walks in 1K+ Cities" from iTunes App Store or Google Play to your mobile phone or tablet. The app turns your mobile device into a personal tour guide and its built-in GPS navigation functions guide you from one tour stop to next. The app works offline, so no data plan is needed when traveling abroad.

The Museum of Art, Rhode Island School of Design (The RISD Museum) contains a broad range of works from around the world, including Egypt, Asia, Africa, ancient Greece and Rome, Europe, and the Americas. It also features many notable works by a range Rhode Island artists such as 17th century Newport furniture makers Goddard and Townsend and nineteenth century Rhode Island painters, such as Anglo-American impressionist John Noble Barlow and portraitist Gilbert Stuart. The museum also features prominent international and American artists such as Picasso, Monet, Manet, Paul Revere, and Andy Warhol. The RISD Museum houses over 86,000 works of art.

The department of Ancient Art includes bronze figural sculpture and vessels, an exceptional collection of Greek coins (that grew out of the collection donated by Henry A. Greene), stone sculpture, Greek vases, paintings, and mosaics, a fine collection of Roman jewelry and glass, and teaching examples of terracottas.Operation hours: Tuesday to Sunday: 10 am - 5 pm; Thursday: 10 am - 9 pm.

Image by Infrogmation on Wikimedia under Creative Commons License.
Sight description based on wikipedia
2

The Haffenreffer Museum of Anthropology is Brown University's teaching museum. The museum has a 2,000-square-foot (190 m2) gallery in Manning Hall on the university campus. Changing exhibitions in the museum’s gallery in Manning Hall, at the center of Brown University's campus, highlight the museum's collections from around the world and the work of Brown University faculty, staff and students. The museum also offers public lectures, performances, symposia, festivals, school activities, and a broad range of programs and events for all ages.

The Museum originated with the private collection of Rudolf F. Haffenreffer, who founded the King Philip Museum in the early 20th century on the Mount Hope Grant in Bristol RI, the former headquarters of Metacom, or King Philip, a 17th-century Wampanoag sachem. The Museum became part of Brown University in 1955 and opened its gallery on the Brown campus in 2006.

Image by chensiyuan on Wikimedia under Creative Commons License.
Sight description based on wikipedia
3

The Governor Stephen Hopkins House, built in 1708, is a museum that was the home of Stephen Hopkins, a governor of Rhode Island and signatory of the Declaration of Independence.

Stephen Hopkins purchased the house in 1743 and made a large two story addition to the original house that was built in 1708. The house is now owned and managed by the National Society of the Colonial Dames of America. It was declared a National Historic Landmark in 1978.
Image by Daniel Case on Wikimedia under Creative Commons License.
Sight description based on wikipedia
4

Annmary Brown Memorial is an art museum, library and mausoleum at Brown University. It is located at 21 Brown Street. It is one of five libraries comprising the University Library system. Before merging with the university in 1948, the museum was founded as an independent collection by General Rush Hawkins and his wife, Annmary Brown. The Hawkinses are interred in a crypt at the building. The building was constructed in 1903 by architect Norman Isham. Today, the museum features a wide array of art from around the world.

The building housed a well known collection of 450 incunabula for many years. In 1990, the collection was moved to the John Hay Library. The museum is normally open on Monday through Friday from 1:00 to 5:00 pm during the academic year, Labor Day through Memorial Day.
Image by Matt Maguire on Flickr under Creative Commons License.
Sight description based on wikipedia
5

The John Brown House is the first mansion built in Providence. It is located along Power Street on College Hill, which is adjacent to the borders of Brown University. The house is named after the original owner and one of the early benefactors of the University, the early American merchant and statesman John Brown. It was declared a National Historic Landmark in 1968.

John Quincy Adams considered the house "the most magnificent and elegant private mansion that I have ever seen on this continent." The original structure was built in 1786 by John Brown. Notable guests during this time include George Washington, who is reported to have visited for tea. The house was sold in 1901 to the prominent Rhode Island industrialist and banker Marsden J. Perry. Under Marsden's supervision, the extension was renovated to add in modern bathrooms and central heating systems.

In 1942, the Brown family donated the house to the Rhode Island Historical Society for preservation. The house was restored to its original colonial decor. The museum now contains many original furniture pieces provided by the Brown family estate.
Image by Daniel Case on Wikimedia under Creative Commons License.
Sight description based on wikipedia
6

The Nightingale–Brown House, at 357 Benefit Street, is home to the John Nicholas Brown Center for Public Humanities and Cultural Heritage at Brown University. In 1792 Captain Joseph Nightingale built the house. In 1814, Nicholas Brown Jr. purchased the home. His descendants owned the house until the death of Anne S.K. Brown in 1985, at which point it was donated to Brown University. Architects Thomas Tefft and Richard Upjohn made additions in 1853 and 1864, respectively. Frederick Law Olmstead landscaped the grounds in 1890. The site was declared a National Historic Landmark in 1989.
Image by Daniel Case on Wikimedia under Creative Commons License.
Sight description based on wikipedia
7

Robert S. Burroughs hired John Holden Green to build the house in 1821. The house passed through several owners before Aldrich purchased it in the 1890s. Aldrich was known for exerting control over the Republican Party at the turn of the twentieth century and creating the Federal Reserve Banking System. Aldrich's daughter, Abby, married John D. Rockefeller, Jr.. Vice-President Nelson Rockefeller was named after his grandfather Aldrich. Winthrop Aldrich deeded the house to the Rhode Island Historical Society in 1974, and Aldrich House currently serves as the Society headquarters and offers changing Rhode Island historical displays. It was declared a National Historic Landmark in 1976.
Image by Daniel Case on Wikimedia under Creative Commons License.
Sight description based on wikipedia
8

The Governor Henry Lippitt House is a National Historic Landmark and a museum that educates visitors about life in Providence during the 19th century. The house was built in 1865 by Russell Warren. It belonged to the Lippitt family for about 114 years until it was donated to the Preserve Rhode Island Society. The house is a beautiful Victorian mansion that is splendidly decorated inside.
Image by Daniel Case on Wikimedia under Creative Commons License.