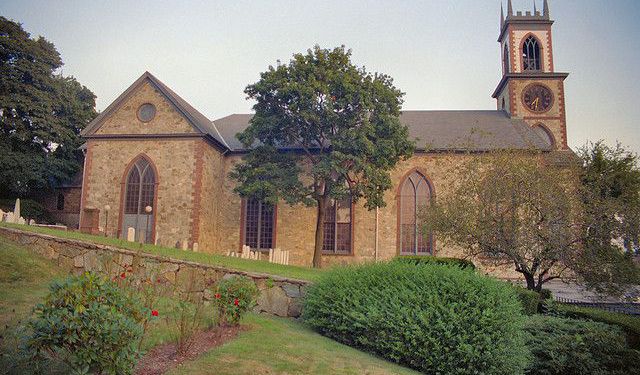 Image by California Cthulhu (Will Hart) on Flickr under Creative Commons License.

Providence's name alludes to “God's merciful Providence”. The original colony was founded by Roger Williams, a religious exile. Today the city is home to a variety of churches and cathedrals and is quite tolerant of religious differences. Take this tour to visit Providence's beautiful and historic places of worship.
How it works: Download the app "GPSmyCity: Walks in 1K+ Cities" from iTunes App Store or Google Play to your mobile phone or tablet. The app turns your mobile device into a personal tour guide and its built-in GPS navigation functions guide you from one tour stop to next. The app works offline, so no data plan is needed when traveling abroad.

All Saints Memorial Church is believed to be the largest Episcopal church in Rhode Island. The church was built in 1872 by Edward Tuckerman Potter, and its design is a combination of the Gothic and Tudor Revival architectural styles. It has the most beautiful stained-glass windows in the area, as well as an Austin pipe organ. The church is listed on the National Register of Historic Places.
Image by All Saints Memorial Church under Creative Commons License.
2

2) Cathedral of Saints Peter and Paul

The Cathedral of Saints Peter and Paul is a Roman Catholic cathedral at 30 Fenner Street in the Cathedral Square neighborhood of Providence. It is the mother church of the Diocese of Providence. The Romanesque church was designed in 1873 by Patrick Keely and added to the National Register of Historic Places in 1975.

The building is constructed of Connecticut Brownstone and is one of the more prominent pieces of architecture in the city of Providence. There are two 156 ft (48 m) towers which contain four church bells representative of the Four Evangelists: Matthew, Mark, Luke and John. They were cast in a Dutch foundry and were dedicated in 1968 by the late Bishop McVinney. The cathedral's interior is decorated in a Gothic revival style and bears close resemblance to Holy Name Cathedral, the Seat of the Archdiocese of Chicago. The firm of Keely, Patrick Charles and Schlacks designed both buildings.

The main altar is built of Verde Issoire, a green marble quarried in the French Alps. Green marble serves as decorative wainscoting along the walls and comprises the interior columns along the nave. The nave and trancepts are capped by a ceiling of gothic vaulting and ribs of carved wood with the areas between the ribs painted in various scenes. Stained glass windows feature scenes from both the New and Old Testaments, and are fashioned from antique Munich Glass as are the west rose window, east rose window and great circular window.

First Universalist Church was built in 1872 by Edwin L. Howland in the Gothic style. It features a fascinating corner tower, stained glass windows made by Henry E. Sharp, grand columns, an organ and other interesting decorative elements. The church is listed on the National Register of Historic Places.
Image by Marcbela (Marc N. Belanger) on Wikimedia under Creative Commons License.
4

Beneficent Congregational Church is a United Church of Christ congregation of Congregationalist heritage in downtown Providence, founded in 1743 during the "First Great Awakening". The current church building features a prominent dome. The structure was built in 1810 and subsequently enlarged with a $30,000 donation from textile entrepreneur Henry J. Steere in honor of his father, Jonah Steere. Beneficent has active ministries working with the homeless in the city and around the world. Beneficent Congregational Church is open for Sunday services and the building is located at 300 Weybosset Street.
Image by Marcbela (Marc N. Belanger) on Wikimedia under Creative Commons License.
Sight description based on wikipedia
5

Grace Church is a magnificent 19th-century example of the Gothic Revival style. The church was built by Richard Upjohn in 1845 and was later renovated in 1912 by Cram, Goodhue & Ferguson. A parish house was also added at this time. The church has fifteen gorgeous stained glass windows dating back to 1949 that depict the history of the church. Grace Church is listed on the National Register of Historic Places.
Image by Marcbela (Marc N. Belanger) on Wikimedia under Creative Commons License.
6

First Unitarian Church of Providence was built from ashlar-laid white stone and represents a combination of the Classic and Gothic architectural styles. The present structure is the third church to be built on this site. It was designed by architect John Holden Greene in 1816. The interior of the church is beautiful and features a mixture of Gothic, Baroque and Federal design elements. The ceiling is elegantly shaped in the form of a medallion. The most striking sight in the church is the balcony pulpit, which is supported by Ionic columns. The church has an organ that was made in 1968 by M. P. Moller. This organ replaced the previous one that was destroyed during a fire in 1966.
Image by Matt Maguire on Flickr under Creative Commons License.
7

St. Stephen's Church is a historic Episcopal church located at 114 George Street, in the midst of the Brown University campus. It remains an active parish in the Episcopal Diocese of Rhode Island.

Image by Matt Maguire on Flickr under Creative Commons License.
Sight description based on wikipedia
8

The First Baptist Church was founded by Roger Williams in 1638. The present church building was erected in 1774-1775 and held its first meetings in May 1775. Construction began on the building in the summer of 1774, and it was the biggest building project in New England at the time. Due to the closure of the Massachusetts ports by the British as punishment for the Boston Tea Party, out-of-work ship builders and carpenters came to Providence to work on the Meeting House. The main portion of the Meeting House was dedicated in mid-May 1775, and the steeple erected in just three days in the first week of June.

Notable additions to the Meeting House have included a Waterford crystal chandelier given by Hope Brown Ives, a large pipe organ given by her brother Nicholas Brown, Jr., the younger, the creation of rooms for Sunday school, fellowship hall, and offices on the lower level, and an addition to the east end of the Meeting House to accommodate an indoor baptistery. The building was designated a National Historic Landmark in 1966.

In addition to weekly worship services, the Meeting House has hosted concerts, talks, and lectures by world-renowned artists, performers, academics, and elected officials. Brown University continues to hold Commencement services at The Meeting House to this day.
Image by Daniel Case on Wikimedia under Creative Commons License.
Sight description based on wikipedia
9

The cornerstone for St. John's Church was laid in 1810 and the church was dedicated in 1811. The building was designed by Federal-era architect John Holden Greene, who designed many buildings in Providence. A Cathedral corporation was formed in 1909 and in 1929, the church was designated the Episcopal seat. The building was renovated in 1855, 1866, 1906, and 1967, and still retains its architectural integrity, but is in a state of deterioration and was listed on the Providence Preservation Society 10 Most Endangered Properties List in 2007, 2008 and 2010.
Image by StrangeInterlude on Flickr under Creative Commons License.
Sight description based on wikipedia