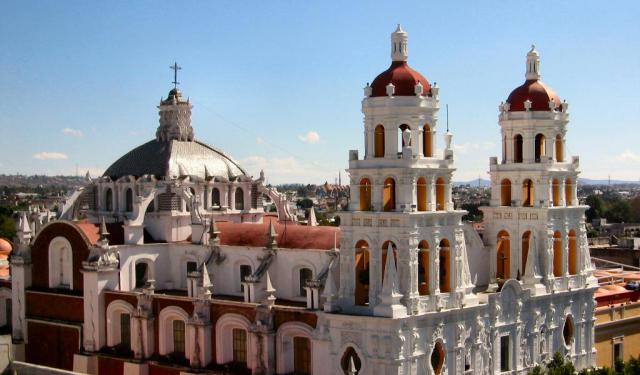 Image by miguelão on Flickr under Creative Commons License.

The subtropical city of Puebla has much to offer to those who are fascinated by the history and life of this Mexican city. Take the following walking tour and visit the first public library in the Americas, fascinating Renaissance and Baroque architectural monuments, statues and other jewels of Puebla.
How it works: Download the app "GPSmyCity: Walks in 1K+ Cities" from iTunes App Store or Google Play to your mobile phone or tablet. The app turns your mobile device into a personal tour guide and its built-in GPS navigation functions guide you from one tour stop to next. The app works offline, so no data plan is needed when traveling abroad.

1) Monumento a Francisco I. Madero

In the city of Puebla there are many monuments that have great historical significance for the citizens of Mexico. One that is definitely a treasure to all is the monument of the 10th President of Mexico - Francisco I. Madero. At the end of the park within which this prominent landmark is located one can see Templo de San José, a wonderful religious building of Puebla.
Image by Unknown on Wikimedia under Creative Commons License.
2

The construction of the building of Teatro Principal was approved in 1759, leading one year later to the apparition of a structure with rich architecture, known to be one of the oldest theaters in Mexico. In 1902 it suffered some damage due to a fire; it was not restored so quickly; in 1940 it was reopened for theater lovers. One can come and visit during the off hours when the place is not in use, namely from 10am to 5pm.
Image by El mundo de Laura on Flickr under Creative Commons License.
3

One of the most precious monuments of Puebla, which brightens up the day for locals of this charming city, is the amazing monument Àngel Custodio, which means Guardian Angel in English. The monument, located on Boulevard 5 de Mayo, is the neighbor of Monumento a Héroes and Puente de Ovando.
Image by Rosa Graciela Montes on Flickr under Creative Commons License.
4

An amazing view that will fascinate you in Puebla is the one located on Maximino Avila Camacho. The edifice of Palacio de Gobierno is a beautiful architectural landmark featuring an exquisite façade in Renaissance style; it is a brilliant work made in gray cantera stone. Since 1967 the building houses the state government offices, while during the 18th century it was home to a Jesuit college, and after that a school, headquarters and a warehouse.
Image by Gustavo Velarde on Wikimedia under Creative Commons License.
5

Fuente de San Miguel is a harmonious and beautiful landmark of Puebla. It was built by Don Juan Antonio de Santa Maria de Ichaúegui and by the masters of stone carving Anselmo Martínez and José Francisco Rabanillo. Dedicated to one of the patrons of the city, the Archangel Miguel, the spring was blessed on June 23, 1777. It is a wonderful fountain which comprises a bowl adorned at the base with life-sized angels; at the top of the centered column the statue of San Miguel is gracefully displayed.
Image by L.D.G. José Sevilla López on Flickr under Creative Commons License.
6

The Biblioteca Palafoxiana, founded in 1646, was the first public library in colonial Mexico, and is sometimes considered the first in the Americas. It has more than 41,000 books and manuscripts, ranging from the 15th to the 20th century.

The Biblioteca Palafoxiana owes its name and foundation to Juan de Palafox y Mendoza, bishop of Puebla. On 5 September 1646, Palafox y Mendoza donated 5,000 of his own items to the Colegio de San Juan - which was founded by him - on the condition that they be made available to the general public.

More than a century later, Francisco Fabián y Fuero ordered the construction of the premises which currently house the Biblioteca Palafoxiana. He donated his own collection, and the collections of the bishops Manuel Fernández de Santa Cruz and Francisco Pablo Vázquez and the dean of the Francisco Irigoyen Cathedral were gradually added, as were volumes from Pueblan religious schools and individuals. Books confiscated from Jesuits upon their expulsion in 1767 were also added.

The library was finished in 1773, consisting of a 43-meter-long vaulted hall on the Colegio's second floor. Two levels of bookshelves were built, and a retablo of the Madonna of Trapani by Nino Pisano was acquired. By the mid-19th century, the size of the collection necessitated a third level of bookshelves.

Image by miguelão on Flickr under Creative Commons License.
Sight description based on wikipedia
7

Located just six blocks away from the Cathedral, Templo del Carmen is an extremely beautiful architectural landmark, especially revered for its decorations of mortar. Right in front of the 17th century church you will find a magnificent garden, with a fountain in its center. The scenery is absolutely stunning; one must see this little treasure of Puebla.
Image by Luis Casas on Flickr under Creative Commons License.
8

Paseo Nicolás Bravo is one of the most beautiful places to visit when in the city of Puebla. The area, within which the plaza was built, served several purposes since its inception in the 17th century. It was founded as a neighborhood alternative to the Village Center, used once as a field of military practice and also as a cemetery. Today the square is a place where people come to commemorate Nicolás Bravo, whose monument stands elegantly in the plaza, and to contemplate the many sculptures adorning the area.
Image by chmx on Flickr under Creative Commons License.