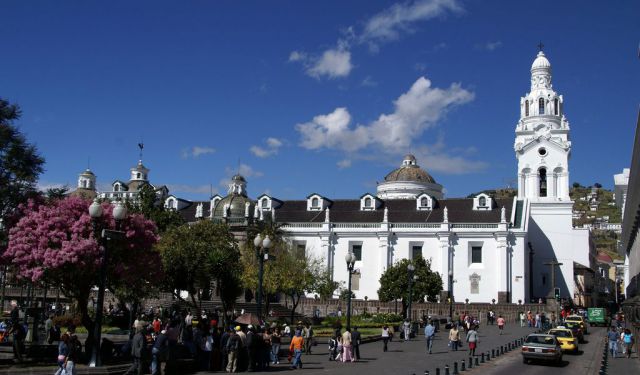 Image by putneymark on Flickr under Creative Commons License.

Nestled high in the Andes, Ecuador's capital Quito is deservedly nicknamed "the City in the Clouds". Adding to its unique landscape is the fact that Quito rests on the foundations of an ancient Incan city. The historic center of Quito preserves much its colonial past manifested in 16th-17th-century buildings featuring a blend of European, Moorish and indigenous styles. This orientation walk comprises a number of historic and cultural attractions, including museums, plazas, cathedrals, and more.
How it works: Download the app "GPSmyCity: Walks in 1K+ Cities" from iTunes App Store or Google Play to your mobile phone or tablet. The app turns your mobile device into a personal tour guide and its built-in GPS navigation functions guide you from one tour stop to next. The app works offline, so no data plan is needed when traveling abroad.

The National Museum of Colonial Art is housed in a 17th-century mansion. Inside you'll find a large collection of paintings and sculptures of Quito as well as Spanish colonial furniture. Through this museum's works, you can get a sense of the tragic events of the colonial times. Some of the paintings from this dark period in the country's history can be difficult for visitors to look at as they depict bloody scenes. The use of such extreme depictions was meant to literally put the fear of God into the indigenous peoples, so they would convert to Catholicism. In addition to these, there are beautiful pieces that date back to the 16th-19th centuries with sculptures as well.

Why You Should Visit:
Provides a good overview of colonial art and can help to illuminate some of its themes and styles, which is helpful when viewing colonial art in the neighboring churches and convents.

Tip:
Zero admission fee; however, photos are not allowed, even without a flash, except in the open courtyard.
If you don't read Spanish, hire a guide.


Image by Mac Prichard on Flickr under Creative Commons License.
2

The Convent of Merced is an impressive church that stands on the Merced Square. It boasts a solid quadrangular tower with Arabic features and a main elegant dome plus four small domes, all of which contribute to the extremely beautiful exterior of the church. There are also many unique and priceless paintings inside.
Image by Martin Zeise on Wikimedia under Creative Commons License.
3

The Plaza de San Francisco is one of the oldest and most impressive squares in the whole city, dating all the way back to the 16th Century. This plaza offers incredible views of both the majestic white Monastery of San Francisco – one of Quito's top architectural sights – and the top of Volcán Pichincha. Why not visit a nice cafe at the corner of the square for a great view of the whole plaza and its many pigeons over an excellent cup of coffee.

Tip:
Join the big festival they hold here from Aug 9 to 12 – the light shows are incredible!
Image by Neverhood on Wikimedia under Creative Commons License.
5

The Museum of the City of Quito was founded in 1998 at the former Hospital of Mercy of our Lord Jesus Christ, itself a historic site. This fascinating museum takes a creative approach to relating Quito's past, spanning from the daily life of the pre-historic era up to the 19th Century. These epochs are vividly brought to life by great wax figures and amazing sound effects.

Why You Should Visit:
Surprisingly entertaining and informative set of displays with a wide range of exhibit material.
There's also a little restaurant inside offering a relaxing place to sit and relax in the quiet with a nice view.

Tip:
As most exhibits are labelled in Spanish only, make sure you take the free tour with the English speaking guide if needed.
While inside, don't forget to look at the floors – in some places, they are a part of the display.

The Santa Domingo Church, or Iglesia de Santo Domingo, was built in the 1580s by the Dominicans, who had arrived to the area in 1541. It features a beautiful chapel with fine decorations, altar pieces, statues and paintings. The founders of the Quito school of painting were responsible for this church's decoration, and there is now a museum in the church where wonderful Quito sculptures and splendid nativity scene are displayed.
Image by cpence on Flickr under Creative Commons License.
7

Teatro Bolivar is located in the heart of the historical quarter of Quito. It has a capacity of 2500 people and for a long time it was the biggest theater in the country hosting some important cultural events.
Image by Neverhood on Wikimedia under Creative Commons License.
8

The Plaza del Teatro is a small traditional square in the historic center of Quito that was formerly the site of a market, bullring and a slaughterhouse. The Teatro Nacional Sucre is its main landmark today. The theater is designed very beautifully, with a neoclassical facade on a baroque style building. There are many arches, columns and amazing statues to be seen outside the theater.
Image by Dimplemonkey on Wikimedia under Creative Commons License.
9

Camilo Egas was a famous Ecuadorian artist and teacher. Having studied in Rome, Madrid and Paris, he was well known as far afield as Europe and North America. His works have been displayed in some of the world's most prestigious galleries. The Museum of Camilo Egas in Quito displays his art in a small, beautiful building from colonial times. His amazing must see works were influenced by all of the modern art schools, from expressionism to surrealism to cubism. The main theme running through his work centered on the Andean indigenous peoples of Ecuador and surrounding countries.

Quito's main square, the Plazza de la Basilica, is most notable for The Basilica del Voto Nacional, also known simply as "the Basilica". Like Notre Dame in Paris, this majestic church is set on a hill, and can be admired from anywhere in the city. First built in 1883, improvements continue to be made to the church to this day. Its towers are the tallest in the country. The Basilica is especially beautiful at night, when it is illuminated in several colors. Don't leave Quito without seeing this amazing house of worship.
Image by Paulo JC Nogueira on Wikimedia under Creative Commons License.
11

The Observatorio Astronómico is situated inside the beautiful traditional park known as Parque La Alameda. Built in 1873, the astronomic facilities inside this observatory are a great attraction for both locals and tourists. Here you will also see statues of the members of the French Geodesic Expedition, who came to Quito to measure the meridian line in the 19th Century. There's also a lake and many other great monuments, plus fantastic fountains that are illuminated at night.
Image by Marc Figueras on Wikimedia under Creative Commons License.
12

The Mariscal Artisans Market is the best place to buy arts and crafts of both good quality and fair prices, as you can bargain for products here. The stalls have great accessories and gifts to take home like the locally-made alpaca sweaters and famous "Panama hats", which actually come from Ecuador.