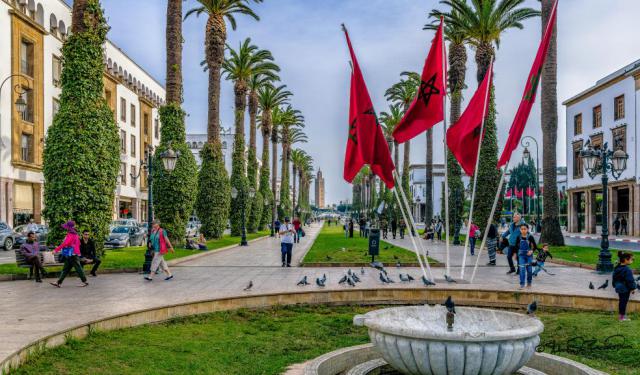 Image by Quentin Drèze on Wikimedia under Creative Commons License.

Morocco's capital Rabat is known for its picturesque natural surroundings as well as man-made beauty manifested in a combination of old and new architecture, featuring Islamic and French-colonial styles, abundance of mosques and historic monuments. One of the city's most prominent sights is the iconic Hassan Tower, a 12th-century minaret, soaring over the ruins of a mosque. Follow this orientation walk to explore the most famous attractions of Rabat.
How it works: Download the app "GPSmyCity: Walks in 1K+ Cities" from iTunes App Store or Google Play to your mobile phone or tablet. The app turns your mobile device into a personal tour guide and its built-in GPS navigation functions guide you from one tour stop to next. The app works offline, so no data plan is needed when traveling abroad.

Hassan Tower or Tour Hassan is the minaret of an incomplete mosque in Rabat. Begun in 1195, the tower was intended to be the largest minaret in the world. In 1199, Sultan Yacoub al-Mansour died and construction on the mosque stopped. The tower only reached 44 m, about half of its intended 86 m height. The rest of the mosque was also left incomplete, with only the beginnings of several walls and 200 columns being constructed. The tower, made of red sandstone, along with the remains of the mosque and the modern Mausoleum of Mohammed V, forms an important historical and tourist complex in Rabat.

Instead of stairs, the tower is ascended by ramps. The minaret's ramps would have allowed the muezzin to ride a horse to the top of the tower to issue the call to prayer. Founder of the Hassan Tower, Yaqub al-Mansur, was a member of the Almohad Dynasty, a Berber, Muslim empire in West Africa and Iberia. The tower, according to tradition, was designed by an architect named Jabir who used a similar design plan for Hassan's sister tower, the Giralda in Seville, modern day Spain. Both of the towers were modeled on the minaret of another one of Jabir's designs, the Koutoubia Mosque in Marrakech. Renaissance Spaniards later added a western style top to the Giralda, which was converted from a minaret to a bell tower for the Seville Cathedral after the Reconquista.

Image by Bernard Gagnon on Wikimedia under Creative Commons License.
Sight description based on wikipedia
2

2) Mausoleum of Mohammed V (must see)

Mausoleum of Mohammed V was built by King Hassan II for his father Mohammed V. The building is a marvel of the Alaouite dynasty architecture and is a mausoleum and the resting place of Mohammed V and his two sons: King Hassan II and Prince Abdallah. The structure is located within the Yacoub Al Mansour Square and is a real king’s mausoleum by its beauty. The mausoleum was design by a Vietnamese architect. The structure is white with a green top roof, specific for the modern Moroccan architecture. The interior is absolutely outstanding and richly decorated and it is one of the few religious sights that is open to the public. The mausoleum is open daily from sunrise until sunset.
Image by Fabos on Wikimedia under Creative Commons License.
3

Saint Pierre Cathedral is a very beautiful religious sight. It is still working. The cathedral was built in the 20th century during the French period in Morocco. The cathedral is famous for its pipe organ, amazing stain glass windows with images that depict the life of Jesus and marvelous mosaics that show the twelve Stations of the Cross.
Image by Sinow93 on Wikimedia under Creative Commons License.
4

The Post of Morocco general office is located on Avenue Mohammed V corner Rue Soekarno in a beautiful piece of modern Moroccan architecture. The building is white and above the entrance door there is a big clock. The façade of the structure is fascinating. The Post Office on Avenue Mohammed V is considered a Rabat landmark.
Image by Davide Cesare Veniani on Wikimedia under Creative Commons License.
5

The Bank Al-Maghrib is the central bank of Morocoo and it was founded in 1959. In 1992, the bank opened the Musée de la Monnaie de Bank Al-Maghrib. The museum contains an outstanding collection of coins and other monetary documents. Also, it has a permanent collection of paintings. The museum is located on the third floor of the Al-Maghrib Bank. The building of the bank is a fascinating model of modern architecture in Rabat.
Image by Gridge on Wikimedia under Creative Commons License.
6

The Parliament of Morocco is located in Rabat. Since 1996, the national legislature has become bicameral and has therefore two parliamentary chambers: the Assembly of Representatives or the lower house, and the Assembly of Councillors. The Members of Parliament come from Morocco and the Moroccan-held parts of Western Sahara Part of the reserve powers, the King of Morocco has the right to dissolve the Parliament. In the past, during the "years of lead" under King Hassan II, this right was used extensively, along with suspensions and extensions of terms. Thus, until 1997, not a single elected Parliament was able to complete its term under normal circumstances. The role of Parliament, and the respect of the monarchy for its integrity, has increased considerably since 1999, when Mohammed VI took the throne. However, the power of Parliament is still being limited as it is the King who appoints the prime minister and on proposition from the latter, the members of government.
Image by Pilecka on Wikimedia under Creative Commons License.
Sight description based on wikipedia
7

Mosquée Assounna is located on Avenue Moulay Hassan and is, at the moment, the biggest mosque in Rabat. It was first built by Sultan Sidi Mohammed Ben Abdellah in the 18th century. It was later renovated several times. During the reign of King Hassan II, the minaret of the Mosquée Sounna was moved stone by stone from the northern part to the southern part of the mosque. The mosque has a neo-Moorish architectural style.
Image by Pline on Wikimedia under Creative Commons License.
8

The Mosque el Faeh is also called the Royal Mosque because it is located just next to the Royale Palace in Rabat and it is the place where the kings go to pray. The mosque is very beautiful, made in a modern style with white walls and a green roof. Non-Muslims are not allowed to enter the Mosque el Faeh.
Image by Bernard Gagnon on Wikimedia under Creative Commons License.
9

Bab Zaer is one of the walled gates of Rabat. Bab Zaer was built in the 12th century and renovated in the 18th century. The gate is very beautiful and has several arches and a lot of passages. This gate leads to the Chellah Necropolis and to the district of embassies in Rabat in Ville Nouvelle.
Image by Frank Douwes on Flickr under Creative Commons License.
10

The site was abandoned in 1154 in favour of nearby Salé. The Almohad dynasty used the ghost town as a necropolis. In the mid-14th century, a Merinid sultan, Abu l-Hasan, built monuments and the main gate, dated to 1339. These later Merinid additions included a mosque, a zawiya, and royal tombs, including that of Abu l-Hasan. Many structures in Chellah were damaged by the 1755 Lisbon earthquake. The site has been converted to a garden and tourist venue.

Image by Davide Cesare Veniani on Wikimedia under Creative Commons License.
Sight description based on wikipedia