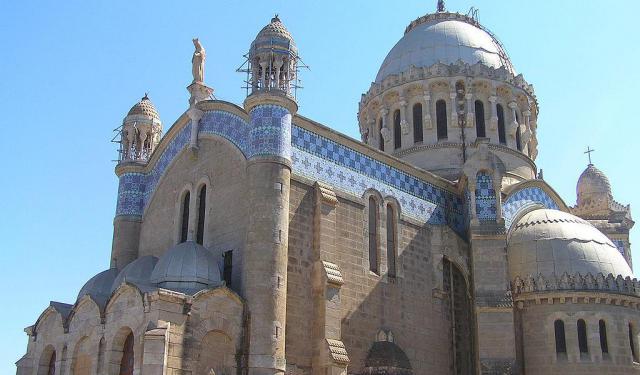 Image by Damien Boilley on Wikimedia under Creative Commons License.

Alger is a highly religious city, which is reflected in the numerous mosques and other religious structures lining the streets. Most places of worship in Alger have a rich history and can provide you with a wealth of information regarding Algerian faith. Take this tour to visit some of Alger's most historic and fascinating places of worship.
How it works: Download the app "GPSmyCity: Walks in 1K+ Cities" from iTunes App Store or Google Play to your mobile phone or tablet. The app turns your mobile device into a personal tour guide and its built-in GPS navigation functions guide you from one tour stop to next. The app works offline, so no data plan is needed when traveling abroad.

Djamaa el-Djedid is a beautiful mosque located next to the Place of Martyrs. Even though it dates back to 1660, it is known as the "New Mosque". The structure of the building incorporates a multitude of architectural styles including Byzantine, Italian and Turkish. Djamaa el-Djedid is one of the few mosques that has survived the dramatic changes Algeria has endured over the years. Due to the variety of design styles, every angle and side the mosque includes different architectural elements. Note that on several occasions, the mosque closes it doors to non-Muslims visitors.
Image by Deezy31 on Wikimedia under Creative Commons License.
2

The Great Mosque of Algiers was built in 1097. It is also known by several other names such as Grand Mosque d'Alger, Djamaa al-Kebir , El Kebir Mosque and Jami Masjid. It is one of the few remaining examples of Almoravid architecture. It is the oldest mosque in Algiers and is said to be the oldest mosque in Algeria after Sidi Okba Mosque. It was built under sultan Ali ibn Yusuf. Its minaret dates from 1332 and was built by the Ziyyanid sultan of Tlemcen. The gallery at the outside of the mosque was built in 1840. The mosque has a rectangular courtyard of 38×46 meters on a 9×11 grid; this layout has been replicated in many religious structures. While the main mosque was built in 1097 AD, according to the minbar, the minaret on the north-western corner was a later addition, in 1332, by sultan Ali ibn Yusuf. The gallery surrounding the main mosque was added in 1840. Materials used in constructing the mosque were stone, brick, roofing tiles and wood, and ornamentation of ceramics and wood was applied.
Image by Zianide on Wikimedia under Creative Commons License.
Sight description based on wikipedia
3

Mosquee Ali Betchin is one of the oldest mosques in the city. It was built in 1623 in the Ottoman architectural style. The mosque has two large domes and several small ones. The designer of this religious monument is Peccinino, an Italian pirate who converted to Islam. In 1843 the mosque was transformed into a church named "Our Lady of Victoires". Fortunately, the architecture of Ali Betchin was not altered, and it returned to serving as a mosque after Algeria gained its independence.
Image by PhareannaH[berhabuk] on Flickr under Creative Commons License.
4

Located at the foot of the Casbah, the Ketchaoua Mosque is a UNESCO World Heritage Site built during the Ottoman rule in the 17th century. The mosque was originally built in 1612. Later, in 1845, it was converted during French rule, to the Cathedral of St Philippe, which remained so until 1962. In spite of these transitions over two different religious faiths in the last about four centuries, the mosque has retained its original grandeur and is one of the major attractions of Algiers, noted for its unique fusion of Moorish and Byzantine architecture.

The principal entrance to the mosque is through a flight of 23 steps. At the entrance, there is an ornamented portico, which is supported by four black-veined marble columns. Inside the mosque, there are arcades built with white marble columns. The beauty of the mosque's chambers, minarets and ceilings of the mosque are accentuated by the distinct Moorish plaster work. The mosque, which now overlooks the public square in the Casbah, with the sea in front, has two octagonal minarets flanking the entrance, with Byzantine and Moorish design and decorations and presents a graceful sight.

Image by Bachounda1 on Wikimedia under Creative Commons License.
Sight description based on wikipedia
5

Mosquee Ibn-Fares is a mosque located in the heart of the city. Ibn-Fares has a rich history. It was built in 1885 and used to be the Great Synagogue of Rabbin Bloch until in 1960 it was desecrated, along with the adjacent Jewish community, by extremists two years before Algeria gained its independence. The synagogue suffered the same fate of many other non-Muslim institutions in Alger, as it was closed. In 1961 a minaret was added, and it was transformed into Mosquee Ibn-Fares. Today it is one of Alger's most popular mosques because of its convenient location and pleasant atmosphere.
Image by PointDZ on Flickr under Creative Commons License.
6

Mosquee Djamaa Safir, located in the heart of the Casbah District, was the first Turkish mosque in Alger. It was built in 1534 in the typical Ottoman style with an octagonal minaret. The building is adorned with ancient columns and other beautiful architectural elements. Over the years, the mosque has undergone two major reconstruction projects. The first was overseen by Hassan Pacha in 1791 and the second by Hussein in 1818.
Image by el7bara on Flickr under Creative Commons License.
7

Mosquee Abdelhamid Ben Badis, as its name suggests, was built in honor of Abdelhamid Ben Badis, a famous Algerian figure and noted Islamic reformist. The mosque took over Saint Augustin Church after Algeria gained its independence. Ben Badis was built in the classical Moorish style, with a dome and two tall towers on each side of the structure. Beautiful architectural elements and patterns adorn the building.
Image by ~crystalina~ on Flickr under Creative Commons License.
8

Mosquee Errahma was originally built as St. Charles Church in the 19th century. It only became a mosque after Algerian independence in 1962. The church was designed in the Romanesque style, with an arched portal, side-wall turrets and small arched windows. The only modern addition is the flamboyant entrance.
Image by (¯`·.¸¸.¤*¨¨*¤.๑۩۩۩๑Zeyneeep! on Flickr under Creative Commons License.
9