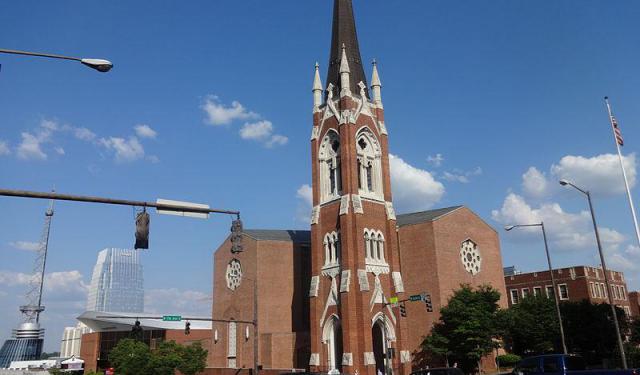 Being at the heart of Tennessee, Nashville features a great number of churches, cathedrals and other places of worship. Take the following walking tour to discover the most beautiful and interesting religious buildings in the city.
Image Courtesy of Wikimedia and Michael Rivera.
How it works: Download the app "GPSmyCity: Walks in 1K+ Cities" from iTunes App Store or Google Play to your mobile phone or tablet. The app turns your mobile device into a personal tour guide and its built-in GPS navigation functions guide you from one tour stop to next. The app works offline, so no data plan is needed when traveling abroad.

The church was designed by Adolphus Heiman (1809–1862), who also designed a number of other notable Nashville buildings, including the State Asylum and the Italianate-style Belmont Mansion. The late antebellum Greek Revival structure features a gabled front entrance of two fluted Ionic order columns supporting a classical pediment. The cornerstone was laid in 1844 and the church was dedicated on October 31, 1847. Richard Pius Miles, the first Bishop of Nashville, was the driving force behind its construction, and he is now buried there.

The church was added to the National Register of Historic Places in 1970.

Image Courtesy of Wikimedia and Kenneth C. Zirkel.
Sight description based on Wikipedia.
2

Sitting at the corner of 5th Avenue and Church Street, the Downtown Presbyterian Church probably can't match the history of its two predecessors (both of which burned down), but has built an international reputation for some rather unique architecture; in fact, mostly due to its distinctive Egyptian Revival style, it earned a National Historic Landmark designation in 1993. The two other surviving sanctuaries with such architectural themes in the U.S. are the First Baptist Church of Essex, Connecticut, and the First Presbyterian Church (Sag Harbor), New York, also known as the Whalers' Church.

Designed by William Strickland, who also designed the Tennessee State Capitol, the Downtown Presbyterian Church features exterior design elements such as Egyptian-style lotus columns and a winged sun disk, while interior elements include stained glass windows, woodwork and perspective renderings of Egyptian scenes on the walls. Besides, the twin towers are reminiscent of similar ones at St. Stephen's in Philadelphia, where the architect lived before moving to Nashville.

Check the availability of tours, but also get to know the people. This church has a limited membership yet offers a Saturday meal program for the homeless and works with a non-profit to train the homeless in restaurant skills. What a pleasure to find a place where the people are just as impressive as the building!

The Baptist Church of Nashville, also known as First Baptist Nashville, was opened in 1820. It is located in downtown Nashville within a walking distance of the Sommet Center. Both men and women serve here as deacons and assist in the Lord's Supper.
Image Courtesy of Wikimedia and Michael Rivera.
4

Designed by Francis Hatch Kimbal from New York City in the 1890s, Christ Church Cathedral is Victorian Gothic, an English architectural style that used to express the strength and solidity of the Industrial Revolution. The exterior is modeled after European cathedrals with wide stone steps leading to heavy oak doors that open into tiled vestibules or "porches". The church has a broad nave, with slightly pointed barrel arches supported by sturdy polished granite columns on heavy bases.

The Cathedral offers tours providing information regarding the history of Christ Church, the architecture and appointments of the Nave (listed on the National Register of Historic Places), and worship at the Cathedral. Tour guides are available for drop-in tours on Fridays between 12:30pm and 2:30pm, Saturday mornings from 10:30am until noon, and Sundays after the 8:30 a.m. and 11 a.m. liturgies (summer tours after the 8 a.m. and 10:30 a.m. liturgies).

Why You Should Visit:
The magnificent windows, the wooden arched ceiling, the gorgeous altar, and the organ with many displayed pipes all make for a truly breathtaking interior.
Image Courtesy of Wikimedia and Andrew Jameson.
5

5) Cathedral of the Incarnation

The church's architecture is modeled after the traditional Roman basilica, specifically the basilica San Martino ai Monti in Rome.
Image Courtesy of Wikimedia and The Peep Holes.
Sight description based on Wikipedia.