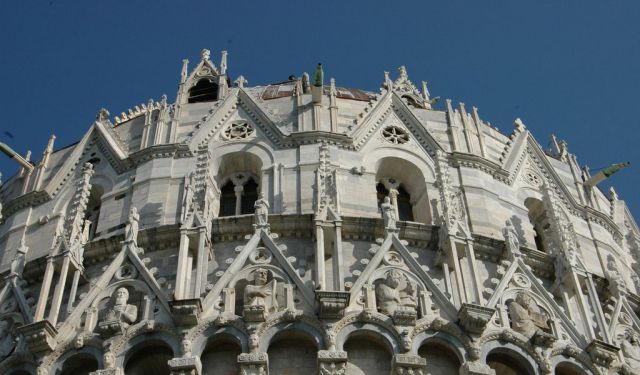 Image by Roxanna Salceda on Flickr under Creative Commons License.

Italy is a land with a long history and a beautiful heritage. Its sacred buildings, landmarks and art are a source of great pride to the people of Pisa and Italy. This special Religious Buildings tour includes all the most beautiful and important religious edifices in the city of Pisa.
How it works: Download the app "GPSmyCity: Walks in 1K+ Cities" from iTunes App Store or Google Play to your mobile phone or tablet. The app turns your mobile device into a personal tour guide and its built-in GPS navigation functions guide you from one tour stop to next. The app works offline, so no data plan is needed when traveling abroad.

This religious school for girls is a place of a rare beauty, with a richly decorated interior. Its story goes back to 1842 when a congregation of nuns was founded by Anna Maria Fiorelli Lapini. People first welcomed into their homes the daughters of poor peasants to help them with their education. Then in 1846 the number of pupils increased so much that Lapini decided to rent a villa in Via Erta Canina, and created this school.
Image by ComùnicaTI on Flickr under Creative Commons License.
2

The Duomo is the medieval Cathedral that stands on the Piazza dei Miracoli (Place of Miracles) and it is a fine example of Italian-Romanesque architecture.

Busketo began work on the building in 1064 and his tomb is built into the façade, which was built by Rainaldo in white stone and grey marble with coloured marble discs. You will see an inscription about the foundation of the Cathedral and Pisa’s victory against the Saracens.

On the eastern end of the building there is the replica of the Pisa Griffon. The 11th century original, which is the largest known Islamic metal sculpture, is to be found in the Cathedral Museum.

The huge bronze doors were added after the original wooden ones were destroyed by fire in 1595. Above the doors are four rows of open galleries; there is a statue of the Madonna and Child and the Four Evangelists. Worshippers usually enter the church by a door built in 1180 by Pisano on the bell tower side of the cathedral.

The interior of the cathedral has black and white marble facings and the mosaics are in Byzantine style. The granite Corinthian columns come from the mosque in Palermo, which was captured by Pisa in 1063.

The gilded ceiling and frescoed dome were restored after the 1595 fire, as was the nave’s coffer ceiling. The fresco of “Christ in Majesty with the Virgin Mary and St John the Evangelist”, which you will find in the apse, luckily survived the fire.


Image by Daderot on Wikimedia under Creative Commons License.
3

The Arcidiocesi di Pisa is the municipal see of the Catholic Church. It was founded in the 4th century and became an archdiocese in 1092. At that time the first Archbishop, Dagoberta, had no palace, but he was friendly with the Countess Mathilda, daughter of Boniface the Duke of Tuscany, who lived in a small palace in a square to the east of the Piazza dei Miracoli. When the countess died in 1115 she left all her property to the Vatican.

The palace was used until 1207 by the foreign governors of Florence, but then it fell into ruin and wasn’t rebuilt until 1472, when it was named the Palazzo Arcivescovile. It has been the official residence of the archbishop of Pisa since then and houses the Archiepiscopal Archives. In 1503 the building was nearly destroyed by fire and was rebuilt by Giovanni Antonio Doscio. The magnificent interior courtyard, ground floor rooms and the main staircase were constructed by Bernardino in the 17th century.

The courtyard is surrounded by elegant archways and slender columns. There are several busts of various archbishops and an imposing statue of Moses, sculpted by Vacca in the 18th century. On the first floor is a chapel full of wonderful Baroque frescoes painted by the Melani brothers.
Image by Tet_Sy on Flickr under Creative Commons License.
4

This congregation of nuns is known in English as the Daughters of Mary Immaculate or by the Italian abbreviation FMA. In 1864 Don Bosco opened an oratory in Mornese (Alexandria) and joined with the congregation. Nowadays this is a center of truly beautiful buildings set around a pretty little church on a wonderful square.
Image by Fontevrault on Wikimedia under Creative Commons License.
5

This is the Pisan branch of the Carmelite congregation. One of the noted characteristics of the order is their belief in the presence of the Virgin Mary in their lives. They aim to replicate her virtues and cultivate a special devotion to her. The order's Pisa institute includes a number of beautiful and intricately decorated features, such as a school, the San Trope church, and a small botanical garden.
Image by Master of San Martino on Wikimedia under Creative Commons License.
6

The Church of Santa Caterina d’Alessandria isn’t a very large building, but it is well worth visiting for the marvelous works of art it houses. The first official recording of the church was made in 1211, along with a hospital that stood beside it. The church you can visit today was built between 1251 and 1300, commissioned by the Order of Dominican Monks. The adjacent bell tower with its mullioned windows was built by Giovanni di Simone. Its façade is of grey and white marble with two Gothic-style loggias on the upper half of the building, and a lovely rose window. The interior was renovated in the 18th century, after it had been partially destroyed by fire in 1651.

The church houses many fine paintings such as “Madonna with Saints Peter and Paul”, by Bartolomeo and the “Triumph of St Thomas” by Memmi. Other paintings executed in the 17th century are by Dandini and Lomi. The marble sculpture on the tomb of Archbishop Saltarelli is by Andrea Pisano and the beautiful statue of the Annunciation is by Nino Pisano, Andrea’s son. The tomb of Gherardo Compagni features a 16th century Pietà statue. According to legend Saint Catherine of Alexandria was martyred by Emperor Maxentius when she refused to worship pagan idols and continued to convert his subjects to Christianity. She was condemned to die on the “breaking wheel”, but when, in answer to her prays, the wheel was miraculously destroyed, the emperor had the unfortunate saint beheaded.
Image by sailko on Wikimedia under Creative Commons License.
7

The Istituto Scienze Religiose is a theological Catholic institute of religious research. It offers to the public a library and Bible study lessons for young people. The complex is very carefully built in an early Romanesque style, with warm natural colors that are typical for this part of Italy.
Image by mrbill on Flickr under Creative Commons License.

Any true adventure in Pisa would not be complete without experiencing the city at night. You'll be enchanted by the view of thousands of lights around the city, and be pleasantly surprised by the extensive range of hot nightspots in this historic and religious center. Take our Nightlife Walking Tour to visit the top nightlife venues in Pisa.

Pisa is not only a beautiful historic city, but also a city of fun. This special guide is full of great activities that every member of the family can enjoy at any age. Take our Kids Fun Walking Tour to find the best things to do in the city with children.