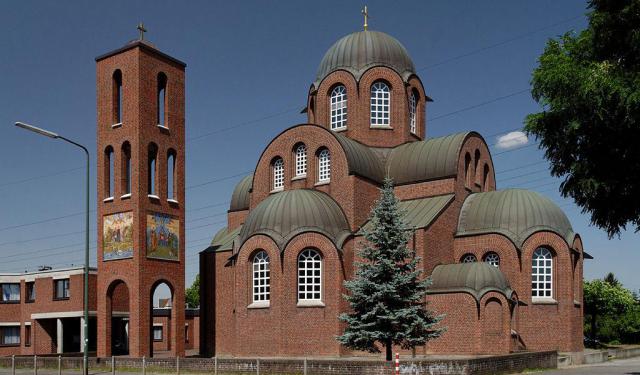 Image by Karl-Heinz Meurer on Wikimedia under Creative Commons License.

Dusseldorf boasts a big diversity of religious sights, most of them Christian. Among these religious places there are churches that were built to commemorate certain saints. Take this self guided tour and learn about the most beautiful and significant places of worship in Dusseldorf.
How it works: Download the app "GPSmyCity: Walks in 1K+ Cities" from iTunes App Store or Google Play to your mobile phone or tablet. The app turns your mobile device into a personal tour guide and its built-in GPS navigation functions guide you from one tour stop to next. The app works offline, so no data plan is needed when traveling abroad.

Lambertuskirche is a Christian church located near river Rhine in Dusseldorf. The building was built in 1394, but due to a fire, it was rebuilt and it acquired the unusual shape of the roof only in 1815. Inside you will see an altar of the basilica which houses a shrine with relics of St. Apollinaris. On the façade is a big sculpture of the Crucifixion. An interesting feature of this church is the winding, twisted tower.
Image by Beckstet on Wikimedia under Creative Commons License.
2

Kreuzherrenkircheis is another church in Dusseldorf. This church was built in 1445 and from the very beginning it was used as a storage room and tax office. Nowadays, it is a place of worship. Although it was built in Gothic style, inside you can admire plenty of paintings from the period when this church was built as well as the keystone.
Image by Wiegels on Wikimedia under Creative Commons License.
3

Andreaskirche is an impressive church in the Old Town of Dusseldorf. This Jesuit church was built in late Baroque style in 1629. Inside you will find an amazing and uniform stucco decoration and also the mausoleum, which contains the coffins of the Electors Palatine. It is considered one of the most beautiful and unique churches in Dusseldorf and it is a good example of Baroque architecture in allof Germany. Its unusual façade painted in bright yellow make this church easy to spot and a good landmark as well.
Image by Wiegels on Wikimedia under Creative Commons License.
4

Neanderkirche was built in 1684 as the first Reformist church in the city. Later in 1916 it was renamed in honour of Joachim Neander, who was a song writer from the 17th century. The building itself was built in early Baroque style with a simplified façade. Although members of the reformed church obtained to rights to their own church, they were not liked by the rest of the citizens. That is why from the very beginning, it was built in such a way that it was not visible from the street. But nowadays, this church has acquired impressive proportions.
Image by Beckstet on Wikimedia under Creative Commons License.
5

Berger Kirche was the first Lutheran church built in Dusseldorf. Like Neanderkirche, from the very beginning it was a small and insignificant sanctuary due to religious restrictions. It was built between 1683-1687. During The Second World War, this church was demolished and later rebuilt in 1960. It was built mainly with red bricks; the simplified facade has traits of late Renaissance. Although it has a quite rude exterior, the interior was built in Baroque style. Nowadays, the church has a contemporary design projected by Tobias Rehberger Frankfurt in 2003.
Image by Wiegels on Wikimedia under Creative Commons License.
6

Pfarramt St. Maximilian is yet another place of worship which represents a late Baroque parish church in Dusseldorf. It is also known as “Max” and it was used as a monastery of the Franciscans until 1804. Since 2006, it represents a community centre of the Catholic church in Dusseldorf. Inside you will find choir stalls dating from the 17th century, as well as the organ, a high altar and a pulpit dating from the 18th century.
Image by Velopilger on Wikimedia under Creative Commons License.
7

Johanniskirche is the biggest protestant church in Dusseldorf. In 1859 a decision was made to build a new reformed church in this city, but its construction began only in 1875. During the Second World War, this church was demolished, and in 1953 it was re-built. The main modifications inside the church were made between 1997 and 2008.
Image by noebse on Wikimedia under Creative Commons License.
8

St. Maria Empfaengnis is a Catholic church located in central Duesseldorf. It was designed by architect Ludwig Mainz. From its very beginning it was a three-aisle basilica with twin towers. This church was built between 1894-1896, and like Johanniskirche, it was damaged during the Second World War. Only in 1969 this church was rebuilt by Josef Lehmbrock.
Image by Wiegels on Wikimedia under Creative Commons License.

It would be difficult to find another German city that provides so many places for going out in a city as small as Dusseldorf. In this city you will find a wide range of different nightspots: glamorous clubs and trendy bars and pubs, especially downtown. Follow this nightlife tour and explore the most amazing clubs and bars in Dusseldorf.