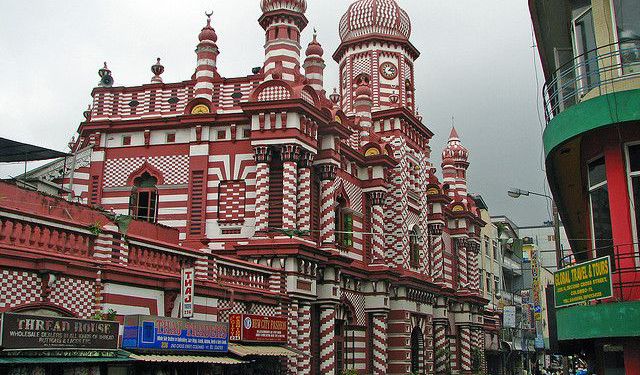 Image by mckaysavage on Flickr under Creative Commons License.

Religious life in Colombo was influenced by historic events and different nations such as Portuguese, Dutch and Indian. Here one can see places of worship belonging to Islam, Catholicism and Methodism, each of them revealing the beauty and importance of their religion. This tour will guide you through the most interesting religious spots in the central part of the city.
How it works: Download the app "GPSmyCity: Walks in 1K+ Cities" from iTunes App Store or Google Play to your mobile phone or tablet. The app turns your mobile device into a personal tour guide and its built-in GPS navigation functions guide you from one tour stop to next. The app works offline, so no data plan is needed when traveling abroad.

St Lucia's Cathedral, named after the saint martyr, Santa Lucia, who is believed to be the protector of those with eye troubles, is the oldest Parish church in Colombo and the seat of the city's archbishop. The former, small, wooden chapel built in 1760, during the Dutch occupation by the Oratorian fathers, was replaced in 1782 by a larger brick church and became the main cathedral of the city in 1834. Built in the Gothic style, this beautiful cathedral is decorated with columns, stained glass windows and seven statues, impressing its visitors.
Image by Bevon on Wikimedia under Creative Commons License.
2

St Anthony's Church is a historical, religious establishment, dating from the nineteenth century, when Catholicism wasn't permitted on the territory of Sri Lanka and the priests where persecuted by the Dutch. Its construction began in 1806 with a little chapel, by a faithful priest Fr. Antonio, which was enlarged in 1822, when a member of the church's congregation brought a statue of St. Antonio from Goa, which was placed on the altar. In 1828, the building was finished and blessed in 1834.
Image by DushiYanthini Kanagasabapathipillai under Creative Commons License.
3

The New Kathiresan Kovils is a Hindu temple, situated in the Pettah district and dedicated to the God of war and victory, Scanda or Murugan. Every year the Kathiresan Temple is the starting point for one of the most important festivals for Hindu worshippers; it takes place in July - August and is called Hindu Vel festival.
Image by New Kathiresan Kovil under Creative Commons License.
4

Wolfendhal Church, whose name comes from a place called Wolvendaal, was built in the eighteenth century, and is the oldest Protestant church in the country and a vestige of Dutch architecture, representing a symbol of unity between Dutch and Sri Lankan cultures. It was established in 1749 as a replacement for the old Roman-Catholic church, on a hill that offers amazing views of the city. The church is designed in a Doric style, with its base constructed in the form of a cross and the roof resembling a dome.
Image by Navin Sigamany on Wikimedia under Creative Commons License.
5

Grand Mosque is one of the most important edifices in the religious life of the country's Muslim community, which was eager to approve the majority of decisions made by the mosque's committee. The first mention of the Mosque dates back to 1505, when the Portuguese anchored on Colombo's shore. It is believed that the beginning of Grand Mosque's history can be linked to Arab traders, who were carrying trade objects between Europe and the Orient, between the first and sixteenth centuries.
Image by Doctor Yuri on Flickr under Creative Commons License.
6

The Methodist Church in Colombo was established thanks to a group of brave British missionaries, led by Dr. Thomas Coke, who wanted to spread the Missionary cult outside Britain's borders. Unfortunately, Dr. Coke died during the journey to Sri Lanka, and the leader of the mission became one of his companions. After six months, despite the losses and financial problems, the group reached the shores of Colombo and the church was built in 1815, being the first Methodist church in Asia.
Image by TV19 - DD Meighen on Flickr under Creative Commons License.
7

Jami-Ul-Alfar Mosque is one of the most impressive buildings of its kind, decorated in red and white brick. The mosque was built in 1909, designed by architect H.L. Saibo Lebbe, and for many years was considered a landmark of the city by sailors who were approaching the shores of Colombo. Still, Jami-Ul-Alfar Mosque is one of the most visited spots in the city.
Image by Mystìc on Wikimedia under Creative Commons License.
8

In the period of Portuguese occupation, the site where now stands St Peter's Church, was occupied by a Dominican monastery and a charity hall. The Dutch converted the structure into a government house where councils meetings took place. In 1804, the British Governor, Frederick North, decided to turn the house into Garrison Church, which was visited and blessed, in 1816, by the Bishop of the Anglo Indian church. Even if its exterior does not look like a church, the interior is decorated with a beautiful altar, tablets on the walls and a wide aisle.
Image by jswieringa on Flickr under Creative Commons License.