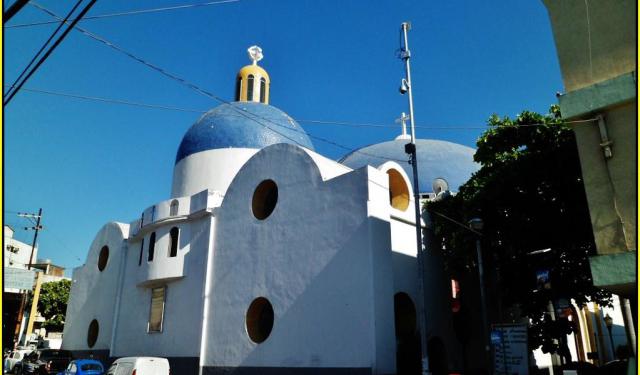 Image by Catedrales e Iglesias/Cathedrals and Churches on Flickr under Creative Commons License.

Catholicism is the primary religion of Mexico, as 91% of the population claims to follow the religion. The Archdiocese of Acapulco is divided into three Dioceses: Chilpancingo-Chilapa, Ciudad Altamirano, and Tlapa as well as separate eparchies in Acapulco. The churches in Mexico are spiritually guided by the Pope, Rome’s Curia, and the Mexican Episcopal Conference.
How it works: Download the app "GPSmyCity: Walks in 1K+ Cities" from iTunes App Store or Google Play to your mobile phone or tablet. The app turns your mobile device into a personal tour guide and its built-in GPS navigation functions guide you from one tour stop to next. The app works offline, so no data plan is needed when traveling abroad.

Centro De Amistad Cristiana Internacional, Spanish for the "International Organization of Churches," is a Christian organization with churches in several countries. The church is filled with the Holy Spirit and the central rule is to obey the Bible, its scripture, and the words of the religious doctrine.
Image by Raul654 on Wikimedia under Creative Commons License.
2

Betel is a little Baptist church located in the Real de Acapulco neighborhood of the city (near the crossroad of Cerrada de Zacatecas and Michoacan). The pastor of the church, Victor Hugo Galicia Ramos, describes the church as "the house of God and the Gates of Heaven."
Image by antmoose on Flickr under Creative Commons License.
3

Centro Cristiano Camino De Santidad is a Pentecostal church located on the Avenue Constituyentes, in the Vista Alegre neighborhood. The church is also situated close to the Iglesia Nacional Persbiteriana Maranatha and a football stadium. Centro Cristiano Camino De Santidad is famous for its warm atmosphere, soft lighting, and its kind pastor, Cándido Elías Salmeron.
Image by Latente 囧 www.latente.it on Flickr under Creative Commons License.
5

Centro Cristiano Internacional Fuente De Agua Viva is an Evangelic basilica located on the famous Acapulco Avenue in the Cuahtemoc district. The church gathers people and their families at mass, which is held by Fernando Montoya Morales.
Image by House Of Sims on Flickr under Creative Commons License.
6

The Basilica of Nuestra Señora del Carmen is a pleasant church located at the crossroad of Ignacio Zaragoza and Alatamirano. The church is named after Señora del Carmen, a patron of Acapulco who is considered a saint. The church features a lot of historical significance and is also an appropriate example of the colonial architecture.
Image by cliff1066™ on Flickr under Creative Commons License.
7

Catedral de Nuestra Señora de la Soledad is the most famous and popular church of Acapulco. A bizarre structure built in 1930, the cathedral served as a film set in the beginning. Later on it was changed into a place of worship. Its design is a result of Moorish, Spanish, and native influences. The cathedral has a distinguishable blue dome and Byzantine towers similar to the ones of mesquites. The interior is decorated with glazed tiles and the floor is covered with golden mosaics. You can also see an extensive collection of religious items.

Why You Should Visit:
Located in the heart of the Zocalo square and very picturesque, with splendid valuable metals and artwork inside.

Tip:
They have an excellent vocal choir on Sundays, should you wish to attend the Eucharistic celebration.

Image by Mitrush on Wikimedia under Creative Commons License.

Create Your Own Walk in Acapulco

Creating your own self-guided walk in Acapulco is easy and fun. Choose the city attractions that you want to see and a walk route map will be created just for you. You can even set your hotel as the start point of the walk.

Every city is so individual that it comes hard to describe it and even sometimes to understand its specific. Acapulco is one of those simple and at the same time adventurous and mysterious places which is interesting to get to know. Acapulco is a very welcoming town, with nice and friendly people. There so many fascinating things and spots to see that it is even hard to make a list of them. Check...  view more

Fun for Kids in Acapulco

When you travel with children, you must always cater to their needs as well as yours. If you are searching for entertainment for the whole family, Acapulco offers water sports, toboggans, and several other activities that will keep the entire gang enthused.

Every city is so individual that it comes hard to describe it and even sometimes to understand its specific. Acapulco is one of those simple and at the same time adventurous and mysterious places which is interesting to get to know. Acapulco is a very welcoming town, with nice and friendly people. There so many fascinating things and spots to see that it is even hard to make a list of them. Check...  view more

Shopping is considered something you can do in your free-time, and a hobby for others. If you are an individual who likes to shop, Acapulco is a great destination to expand your collection. The city is full of diverse flea markets, shopping centers, and malls.