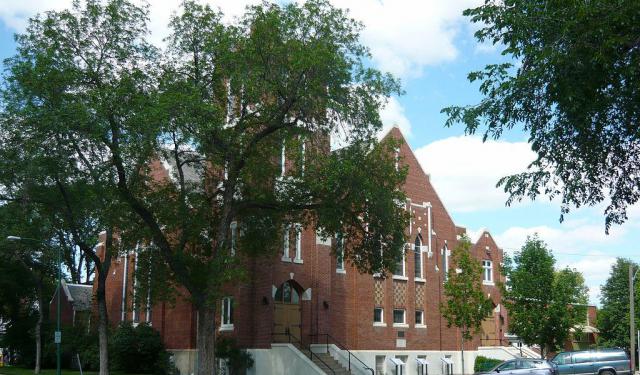 Image by Jordon Cooper on Flickr under Creative Commons License.

Visiting Saskatoon, you will observe many religious buildings, most of them not only valued for their architectural but also historical value. Take this self-guided tour to explore the most important architectural churches and cathedral in Saskatoon.
How it works: Download the app "GPSmyCity: Walks in 1K+ Cities" from iTunes App Store or Google Play to your mobile phone or tablet. The app turns your mobile device into a personal tour guide and its built-in GPS navigation functions guide you from one tour stop to next. The app works offline, so no data plan is needed when traveling abroad.

Third Avenue United Church was established in 1912. The English Gothic structure is unique because of its exterior design, which is made of solid stone used for its two towers of different sizes. The interior is divided into two parts, namely the main floor and the balcony. There are three colossal stained-glass windows in different rich colours and floral motifs. The Church is popular for its architectural value and also for the concerts that it supports.
Image by trekphiler on Wikimedia under Creative Commons License.
2

Knox United Church is a designated municipal heritage building at 838 Spadina Crescent East, in the Central Business District of Saskatoon.

The congregation was established as part of the Saskatoon Presbyterian Field Mission in 1885 after the North-West Rebellion. Meetings were held in homes, the Old Stone Schoolhouse, the Methodist Church and even the railway roundhouse until a wood church holding 160 was constructed near the river.

Architects Brown and Vallance of Montreal designed the present-day church in the Collegiate Gothic style. Construction started in 1912 and was completed in 1914. The two storey building is made of dark red brick walls, features stained-glass windows, and has seating 1,200. The acoustic qualities of the church have made it a regular venue for various social and cultural events, including chamber music performances.

Image by Jordon Cooper on Flickr under Creative Commons License.
Sight description based on wikipedia
3

3) Cathedral of St John the Evangelist (must see)

The Cathedral of St. John the Evangelist, located at 816 Spadina Crescent East, Saskatoon, is the cathedral of the Anglican Diocese of Saskatoon. St. John's, its first Anglican parish, was not established until 1902 owing to the substantially Methodist and to a lesser extent Presbyterian character of the early settlement, it having been founded as a temperance colony. The first St. John's church, a wooden frame building, was erected in 1903.

The present brick, Tyndall stone and terra cotta structure was raised in 1912-17, in an unornamented neo-Gothic style. Its chief distinguishing characteristic is a rood screen at the chancel steps. The rood screen, pulpit, lectern, and high altar are made of Carrara ware (Doulton white terra cotta resembling Italian Carrera marble). The cornerstone was laid in 1912 by the Governor General of Canada, Prince Arthur, Duke of Connaught. The building's foundation is made of fieldstone.

St. John's was designated a pro-cathedral in 1924 while Saskatoon remained part of the Anglican Diocese of Saskatchewan with its cathedral in Prince Albert. In 1932 the Diocese of Saskatoon was created and St. John's became its cathedral. The cathedral had only a small reed organ and piano by way of musical instruments until 1956 when a three-manual Hill, Norman and Beard organ was built; it was replaced by a two-manual Casavant Frères organ in 1981-1982.

St. Paul's Cathedral is a Roman Catholic Cathedral in Saskatoon. The Cathedral is located in the Central Business District near the river. The cornerstone of St. Pauls's was laid by Sir Wilfrid Laurier. Originally built as parish church, it became a pro-cathedral in 1921, and a full cathedral in 1934 when the diocese of Saskatoon was established. The organ was installed in 1912.

St James' Anglican Church was established in 1912 and is located on Dufferin Avenue, not far from Victoria School. It is a small church in comparison with other churches in Saskatoon. The structure is made of brick stone and has a tower on the front side. The windows have an original design with fussed glass, the work of Lee Brady. St James' Anglican Church suffered some damages because of the fire in 1976 and later in 1982, but it has been restored.
Image by Jordon Cooper on Flickr under Creative Commons License.
6

The Grace Methodist Church was established in 1882 and is the oldest church in Saskatoon. Later, in 1968, it changed its name to Grace-Westminster United Church. The actual site was built in 1928 in English Gothic style, and designed by David Webster. In 1949 a tower was built, one that can be seen above the main entrance. There are two entrances; both of them have the same design and are decorated by an arch similar to the arches that adorn the main windows from the front side of the church.
Image by Drm310 on Wikimedia under Creative Commons License.
7

St. Joseph's Parish is a Roman Catholic Parish that was founded in 1928. The exterior design is different from most of the churches in Saskatoon. The towers have a beautiful shape that resembles Colonial style. The Romanesque building was designed by architect Mr. G. Verbeke, who created these towers for bells, which somehow were never installed. The facade is decorated by a Romanesque circular window. There is also a rectory on the west side of the church, which is used for social events.
Image by L.C.Nøttaasen on Flickr under Creative Commons License.
8

Koimisis Tis Theotokou Greek Orthodox Church is located on Dufferin Avenue. It is one of the newest churches in Saskatoon and it is remarkable for its simple and original exterior design. The Greek Church has elements of Neo-Gothic architecture. The narrow flamboyant windows can be seen on each side of the structure. The white façade is combined with brick stone. The same ornaments appear on the tower.
Image by Daryl Mitchell on Flickr under Creative Commons License.

Tour of Architectural Sights of Saskatoon

Saskatoon is a unique city in Canada that has outstanding buildings and wonderful views due to its history and to the ongoing wish of preserving it for future generations. Take this tour to see the most incredible landmarks Saskatoon has to present.