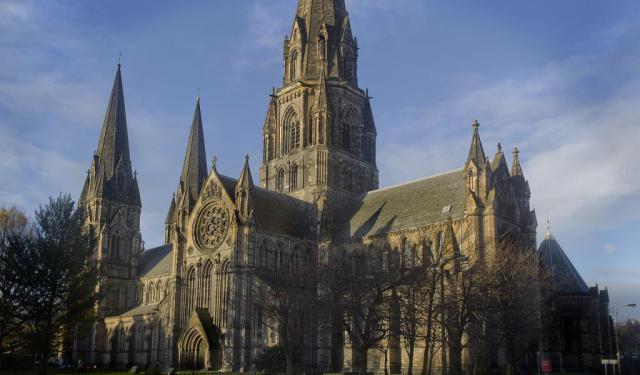 Image by themajesticfool on Flickr under Creative Commons License.

Edinburgh is an enchanting city and home to numerous places of worship. The city is open to all religions and features magnificent Presbyterian and Catholic churches, the main two religions in Scotland; as well as Jewish synagogues and Islamic mosques, and even Buddhist centers. Check out this tour and visit some of Edinburgh’s beautiful religious sites.
How it works: Download the app "GPSmyCity: Walks in 1K+ Cities" from iTunes App Store or Google Play to your mobile phone or tablet. The app turns your mobile device into a personal tour guide and its built-in GPS navigation functions guide you from one tour stop to next. The app works offline, so no data plan is needed when traveling abroad.

Edinburgh Hebrew Congregation is a Jewish cultural center where visitors can learn more about Jewish history, their religious principles and practice. The Hebrew Congregation organizes the Edinburgh Festival of Spirituality and Peace during the month of August. People can participate in different activities, public talks, panel events and film screenings.
Image by zeevveez on Flickr under Creative Commons License.
2

The Buddhist Centre is located on Melville Terrace. It offers different activities that involves its visitors in a friendly and comfortable environment. They offer interesting courses to learn about meditation and the practice of Buddhism.
Image by alicepopkorn on Flickr under Creative Commons License.
3

While in Edinburgh don’t miss a visit to the Barclay Viewforth Church of Scotland, which you will find in the Tollcross are of the city.

This beautiful church is a fine example of the Gothic Revival style that characterizes the ancient buildings in Scotland. It was built by Frederick Thomas Pilkington in 1864 and its 76 metre-high spire is one of the tallest in Edinburgh.

The ground floor of the building has seating around a heart-shaped auditorium and there are two tiers of galleries overhead. In all the church seats up to 1200 people. The pulpit is made of marble and is placed under the organ pipes.

The morning services are traditional with a sermon and a choir, but in the evenings the services are more modern and the music is often Gospel-Rock. A crèche has been added to look after small children whilst their parents are attending services. The church also has a film club, which meets once a month to show a film and hold a discussion about it afterwards.


Image by Dave Morris on Wikimedia under Creative Commons License.
4

Edinburgh is a multi-religion city and you will find the Mosque and Islamic Centre on Potterrow.

The mosque was designed by Basil Al-Bayati and opened in 1998. The exterior has traditional Islamic features, but also touches of the Scot Baronial/Gothic Revival style. The main hall is large and sparsely decorated, with two chandeliers, a carpet and chairs for the elderly and disabled. It has two side entrances and the women’s galleries above overlook the hall. Out of respect for the religion, the main hall and galleries are not open to non-Muslims.

The main hall is used for Jumu’ah and Salah. A second, smaller hall is mainly used as a storage area, but is cleared out for special events. The centre also has an extensive library where you can either borrow or buy Islamic books. There is also a long table and seating area where Arabic and Koran classes are held and where lively discussions take place.

The ablution rooms are off to one side, and are separate for men and women. Another, newer ablution room is where the traditional washing and enshrouding of the dead takes place before burial.

The Mosque Kitchen is open to the public and you can either buy a takeaway or enjoy your meal at one of the outdoor tables. The food is, of course, halal and you can choose between Southern and Middle-Eastern Asian menus.
Image by Wajihaq on Wikimedia under Creative Commons License.
5

The Apostolic Church offers many activities, such as Alpha course, Kidzone, Inspiration Gospel Choir, Women's event, Men's breakfast, Prayer nights, Life classes and Housegroups. This beautiful Pentecostal church was founded in 1931 and it has recently changed its name to Life Church. It is best known for its large murals depicting archangels, angels, choirs, saints, martyrs and evangelists.
Image by Jaume Meneses on Flickr under Creative Commons License.
6

Edinburgh is an ancient city, but a busy, crowded one. Sometimes it’s good to get out of the hub and walk in the hills to clear your head. While you are out on a walk, you’ll probably see St Anthony’s Chapel on top of a hill and you’ll want to get closer to have a look at it.

The chapel overlooks St Margaret’s Loch and is perched on top of a rather steep hill, so you’ll have to have rather a lot of stamina and curiosity to get to the top.

Sadly, there are no definite records to date the construction of the chapel, but it was probably built during the 14th century. There is a short mention of it in the early 15th century, when Pope Martin V granted a small sum of money to repair the chapel.

Today, only the north wall remains, and you can see some of the original vaulting which suggests that the chapel had three bays. In keeping with the era, the building was probably rectangular with a three storey tower.

It is possible that it was built as an additional chapel serving Holyrood Abbey at the foot of the hill, and used by visitors on their yearly pilgrimage to the area. A beacon lit at the top of the tower would have served as a focal point for pilgrims arriving in the Firth of Forth.
Image by oosp on Flickr under Creative Commons License.