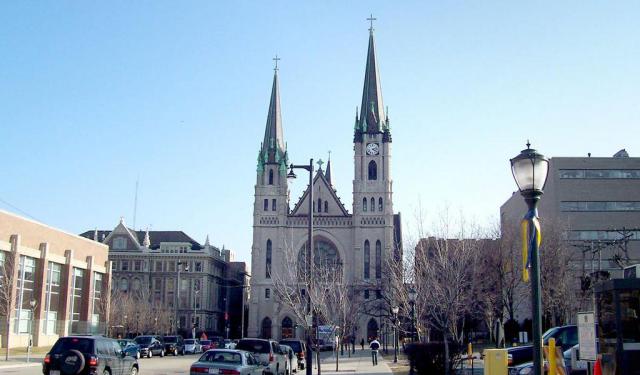 Image by SCUMATT on Wikimedia under Creative Commons License.

Milwaukee boasts a number of beautiful historic churches, the majority of which are listed on the National Register of Historic Places. Generally the city's religious make-up is diverse, from Catholic to Jesuit, though there are a number of Catholic churches and cathedrals. Take this walking tour to admire the religious masterpieces of Milwaukee.
How it works: Download the app "GPSmyCity: Walks in 1K+ Cities" from iTunes App Store or Google Play to your mobile phone or tablet. The app turns your mobile device into a personal tour guide and its built-in GPS navigation functions guide you from one tour stop to next. The app works offline, so no data plan is needed when traveling abroad.

St. Paul's Episcopal Church is located in the Episcopal Diocese of Milwaukee. Noted for its Tiffany windows, it is listed on the National Register of Historic Places and is a designated Milwaukee Landmark. Founded in 1838, St. Paul's parish is the oldest Episcopal parish in Milwaukee and the third established in Wisconsin. It is located in the wealthy downtown east neighborhood of Juneautown.

Members included many prominent citizens of the time, which helped the church to become the most influential Episcopal congregation in the state. The building was designed by local architect Edward Townsend Mix in Romanesque style and built in 1884 using Lake Superior Sandstone, a dark red sandstone found near the Apostle Islands in Lake Superior. It features wrought iron by Master Blacksmith Cyril Colnik. St. Paul's Church also has the largest collection of Tiffany stained glass windows in the state. This includes the largest window ever made by Tiffany Studios of New York. Spanning 30 feet long, 24 feet high and up to two inches thick, it is a copy of Gustave Doré's masterpiece "Christ Leaving the Praetorium." It is believed that the building closely resembles one which was designed by architect Henry Hobson Richardson, whose plans were published in the Architectural Sketch Book, but never built.

Image by Shamanic Shift on Flickr under Creative Commons License.
Sight description based on wikipedia
2

2) Cathedral Church of All Saints

The Cathedral Church of All Saints is the bishop's church of the Episcopal Diocese of Milwaukee. The current parish is a descendant of a small mission by the Right Reverend Jackson Kemper. It is located in Milwaukee's downtown Yankee Hill neighborhood.

The Gothic Revival church building was designed by E. Townsend Mix, a noted Milwaukee architect, and constructed as Olivet Congregational Church in 1868. The building was sold to the Episcopal diocese in 1871 when the Olivet congregation faced bankruptcy, and was consecrated as a cathedral in 1898. The cathedral complex, which includes the church, an attached guild hall and nearby bishop's manse, is listed on the National Register of Historic Places and was designated a Milwaukee City Landmark in 1973.

The tower and steeple, approximately 200 feet tall, houses a bronze bell cast in Pittsburgh, Pennsylvania in 1867, one year before the church was built. It measures almost 40 inches in diameter at the mouth, weighs approximately 1,200 pounds and is tuned to an A. Since renovation in the 1950s the steeple cross is mounted out-of-line with the facade, slightly angled towards Lake Michigan. The Sienna marble altar and triptych was designed and built by Eugene W. Mason, Jr. of New York City, and is of Italian Gothic styling. Most of the stained glass windows in the cathedral were designed and produced in England, most by Lavers and Westlake of London. Today's church features a liturgy in the Anglo-Catholic tradition. The congregation is small, including only around 250 members.

Image by James Steakley on Wikimedia under Creative Commons License.
Sight description based on wikipedia
3

3) The Cathedral of St. John the Evangelist

The Cathedral of St. John the Evangelist is the episcopal see of the Catholic Archdiocese of Milwaukee, located just east of Cathedral Square Park. It is listed on the National Register of Historic Places and designated a Milwaukee Landmark. Archbishop John Henni purchased land for the cathedral in 1844. The cornerstone was laid on December 5, 1847, after nearly $30,000 was raised for construction. It was completed in 1852 and dedicated to John the Evangelist.

The building was designed by architect Victor Schulte in the nineteenth-century Zopfstil style and built using Cream City brick, a distinct light colored brick found locally. A fire partially destroyed the church and most of its contents in January 1935. Only the tower remained fully intact. Rebuilding was completed in time for midnight mass on Christmas Eve of 1942. St. John's Cathedral features thirteen large hand-cut stained glass windows made by T.C. Esser Company of Milwaukee. A large tomb-shaped baptismal pool and marble font is also situated prominently in the center of the sanctuary. In 2001 a gated garden and atrium were added at the north end of the building.

The Cathedral of St. John the Evangelist celebrated its 150th anniversary in 1997. It was rededicated on February 9, 2002, following a controversial renovation project which consisted of some restoration work on the historic structure but also a radical remodeling of the interior.

Old St. Mary Church was built in 1847, by the Old St. Mary Parish. The parish was founded a year earlier, by German Catholic immigrants. Milwaukee, having been incorporated only the year before, was still a young city at that time, and Wisconsin hadn't yet become a state. Old St. Mary's is the oldest church still standing in the city.

The church was designed by Victor Schulte, a Prussian immigrant, who designed three other religious buildings in the area. It is constructed of Cream City brick. Its tower gained a clock in 1860 and three bells in 1868. These bronze bells were cast in Munich. Mass was held on the main level, and a school was housed on the lower level until 1867. The carved wooden main altar was purchased in 1848.

St. James' Episcopal Church is a parish of the Episcopal Diocese of Milwaukee. It was founded as a mission of St. Paul's Episcopal Church in 1857. The current building was built in 1867. It burned on December 31, 1872 with only the walls and bell tower surviving the fire. The church reopened on April 19, 1874.

Calvary Presbyterian Church, or Calvary Church, is located in the Marquette University district of downtown Milwaukee. It is listed on the National Register of Historic Places. The building was designed by Milwaukee architect Henry C. Koch in Gothic Revival style and built in 1870 using Cream City brick, a distinct light colored stone found locally. The exterior has since been painted a bright red color.

Calvary Church features an indoor prayer labyrinth laid into the floor. Its design was inspired by a 12th century labyrinth found at the Cathedral of Chartres in Chartres, France, and has eleven circuits with a rosette center.

Gesu Church is a Jesuit parish of the Roman Catholic Archdiocese of Milwaukee. It is listed on the National Register of Historic Places and was designated a Milwaukee Landmark in 1975. Although the church is not affiliated with Marquette University, through a 1991 partnership, it ministers to the downtown campus of Marquette and surrounding neighborhood. Gesu, founded in 1849 as St. Gall's Parish, initially served English-speaking Irish Catholics from the near south and west sides of Milwaukee in what was the neighborhood of Tory Hill. As the parish grew, it built Holy Name Church in 1875, and by 1887 Jesuit officials combined the two parishes into one church. The Gesu name was chosen in 1893 to honor the Church of the Gesu in Rome where St. Ignatius of Loyola, founder of the Society of Jesus, is buried.

Architect Henry C. Koch designed the French Gothic building, drawing inspiration from the Cathedral of Chartres in France. It features landmark spires of unequal height and stained glass windows. The cornerstone was laid on May 23, 1893 with over 20,000 people in attendance. A dedication ceremony followed on December 17, 1894, to mark the formal completion of the church.

Trinity Evangelical Lutheran Church is listed on the National Register of Historic Places and is a designated State Historic Site. The building was also declared a Milwaukee Landmark in 1967. Trinity's congregation was founded by German immigrants of the Lutheran Church - Missouri Synod in 1847, and is the oldest church associated with the Synod in the city.

Members of the Trinity Church established St. Stephen Lutheran Church in 1853, in order to serve parishioners south of the Menomonee River. These two churches, along with members of St. John's Evangelical Lutheran Church, helped to seed a number of other Lutheran churches in the area.

The building was designed by architect Frederick Velguth in German Romanesque/Gothic Revival style and built in 1878 using Cream City brick, a distinct light colored brick manufactured locally. It features a landmark 200 foot spire and sandstone details on the façade. Notable of the church's interior is the historic Schuelke organ in the rear gallery, containing some 1,600 pipes.

German architecture of this type is typical of the historic structures found in and around downtown Milwaukee, including parts of the neighboring Pabst Brewery complex. Construction of a new church office building and conference center began in September 2005, after the old office was razed the previous year. This addition to the grounds is scheduled for completion by March 2006.

Milwaukee, a city in Wisconsin sitting on the western shore of Lake Michigan, is known primarily for its breweries. However, if you're not beer thirsty, you'll find much other delectable stuff there fit to satisfy your culture and curiosity buds. The Grohmann Museum, hosting the world's most comprehensive art collection depicting the evolution of human work, is one such place. If...  view more

Milwaukee is home to buildings with impressive beauty and rare architectural styles. Many buildings were designed in the German style and others in French. There are some grand skyscrapers in Milwaukee's downtown that are a must-see for any tourist. Take this walking tour to admire the architectural gems of Milwaukee.

Milwaukee is home to some of the greatest museums in America. Here you will be able to visit the city's famous art museum and the Harley Davidson Museum. The exhibits are diverse and there are many interesting things to see and experience. Take this tour to have an exciting time at the Milwaukee museums.

Monuments and Statues Tour in Milwaukee

Milwaukee is home to a variety of statues and monuments of different grades of importance, from entertaining ones to memorials commemorating war and its victims. There are also very unusual statues such as a monument to a duck and its ducklings. Take this walking tour to explore Milwaukee's monuments and statues.