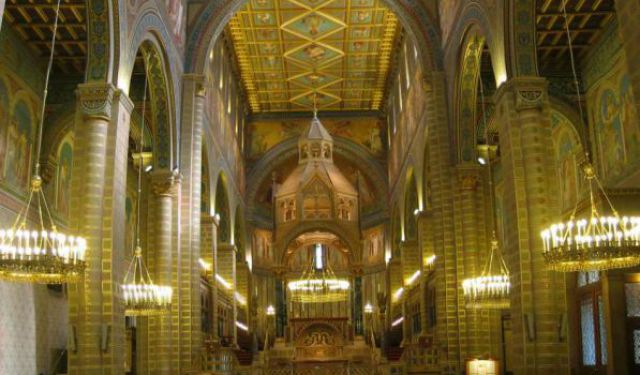 Image by Bernd Gutmann on Wikimedia under Creative Commons License.

The city of Pecs had become an important Christian centre by the fourth century, and the episcopate of Pecs was established in 1009. Pecs has always been a multicultural city because of its history which remembers the Ottoman occupation and early Christian influence. Take this tour to explore more exquisite religious buildings in Pecs!
How it works: Download the app "GPSmyCity: Walks in 1K+ Cities" from iTunes App Store or Google Play to your mobile phone or tablet. The app turns your mobile device into a personal tour guide and its built-in GPS navigation functions guide you from one tour stop to next. The app works offline, so no data plan is needed when traveling abroad.

The Pauline Church was built in 1937 and is one of Hungary's architectural masterpieces. The building was designed by Károly Weichinger. Visitors will be surprised by the wonderful Zsolnay ceramics statue of the Virgin Mary that stands before the Church, and of course by the colorful sculpture by Victor Vasarely facing the building. The altar of the church is made from bronze and depicts a scene in which Prince St. Emerich is kneeling in front of the Virgin Mary. The Pauline order was established in 1252 and in the thirteenth century hermits from the caverns and woods were collected together by Bishop Bartholomew and organized the monastery. At the end of the 1930s a hermit house of the Pauline monks was built near the Church.
Image by Váradi Zsolt on Wikimedia under Creative Commons License.
2

2) All Saints Church (must see)

The Romanesque-style All Saints Church is one of the oldest churches in Pécs. It was built in the twelfth century and underwent several Gothic and Baroque modifications. This was the only church in Pecs that remained Christian in times of Turkish rule. The Catholics, Reformed and Unitarians used it as a gathering place. Religious debate was held here in 1588 by the Reformed and Unitarian parish ministers; the debate is known as Pécsi disputa. The church returned to the Catholics in 1664. The south part of the cemetery that is placed near the church contains tombs from the eighteenth and nineteenth centuries but the north one holds Baroque gravestones.
Image by Mrszantogabor on Wikimedia under Creative Commons License.
3

The Havihegy Chapel was built in memorial of the plague of 1690. The citizens of Pécs brought all the materials up the high hill, where the Chapel was to be constructed. The building was designed in Baroque style and was expanded in 1710. But fire incinerated the church interior in 1780. The small chapel with the wagon-roof has a cramped loft for its organ that is near the entrance, but the exterior complements the landscape. The main altar is made from marble and the altar-piece depicts the Virgin Mary, and the two side-altars show us St. Sebastian and St. Florian.
Image by Csanády on Wikimedia under Creative Commons License.
4

The Augustine Church is a medieval church transformed to a mosque during Turkish rule. In 1702, when the Augustine order took it, the friars reconstructed the building. The church was furnished with the arched sanctuary, the vaulted chapel, the organ loft and the tower, but the vestry room was built later in 1935. You can find the beautiful eighteenth-century chancel of Viennese master Martin Fischer; the work is named "Sorrowful Virgin." The other elements of decoration were made in the twentieth century. For example, the frescos in the centre are created by Ernő Gebauer in 1941 and the paintings are the works of Emil Gádor. In spite of the long Christian history of the church three Turkish windows remain on the south facade.
Image by Csörföly Dániel on Wikimedia under Creative Commons License.
5

The construction of the Lyceum Church and Monastery dates back to the years of 1741 to 1756 when it was erected by the Paulite friars using the stones of a Turkish mosque. The building was abandoned after the Paulite order suppression in 1786. All the furnishings were shared among the churches. In 1832 Bishop Ignác Szepessy founded a school (Lyceum) in the monastery building and reopened the church, to provide religious education and services for the students. When the Elizabeth University of Pozsony (now Bratislava) moved to Pécs, the church was renamed the University Church. In the 1930s the interior of the building was repainted and the modern frescos are the work of Ernő Gebauer, the painter from Pecs. The former Paulite monastery Baroque building was abutted to the church and turned into the secondary school (Széchenyi Gimnázium), but the church itself was restored back to the Paulite order in 1997.
Image by Csanády on Wikimedia under Creative Commons License.
6

6) The Mosque of Pasha Qasim (must see)

The Mosque of Pasha Qasim is one of the symbols of the city, located in the city centre, on the main square. Today, it functions as a catholic church. The building, hundred steps both its length and its width, was built by Pasha Qasim the Victorious between 1543 and 1546. The minaret of the mosque was brought down by the Jesuits in 1766. Standing at the highest point of Pécs's Széchenyi square, the mosque of pasha Qasim is the greatest example of Turkish architecture in Hungary. It was probably built in the second half of the 16th century. In the 1660s Evliya Çelebi, the famous Turkish traveller wrote of the overwhelming majesty of its view. The mosque was built upon the ruins of Saint Bertalan church by using its rocks - transforming it to the mosque of the city.

A number of changes had been made on the building between the 18th and the 20th centuries. Its minaret was ultimately taken down but had been previously enlarged. Only the main square part remained of the original structure: the octagon drum, covered by a dome. There are arc windows in two rows on the façade of its south-eastern, south western and north-eastern part; 3-3 and 4-4 pieces. Inside the church, in the remaining plaster parts the Turkish decoration and inscriptions of the Qur'an are clearly visible. The Turkish pulpit and the women's balcony were destroyed and the mihrab is not the original either.

Image by Csörföly Dániel on Wikimedia under Creative Commons License.
Sight description based on wikipedia
7

The Synagogue of Pecs was built in July 1869 according to the design made by Frigyes Feszl Károly Gerster and Lipót Kauser, who played an essential part in Hungarian architecture of the nineteenth century. The Jewish community of Pecs is not numerous, but very unified; they use the Synagogue regularly on weekdays. Jewish religious laws do not agree with metaphorical motifs which is why the main facade of the building of Synagogue is divided into three parts. According to Biblical inscriptions people of any religion may visit the Jewish service. Visitors can see the "stone tablets of Moses" on the top of the façade. The synagogue sanctuary ceiling is covered with painted stars. The sanctuary itself is divided from the nave by the bronze railings and is directed toward Jerusalem.
Image by Csörföly Dániel on Wikimedia under Creative Commons License.
8

The Calvinist Church was constructed in 1907. The unique design was created by Imre Schlauch. The oak pulpit is a copy of the stage of the Budapest Kálvin Square Church. The organ and the original furniture with the ornaments of the Holy Trinity were made by Pecs citizen József Angster with his son and a joiner Ferenc Keil. The furniture of the Congregation House was built in 1927 by citizens Győző Szatyor and Emil Vata. The decoration of the walls are presented with the brick lining around the windows. The style of the building holds Gothic and Romanesque elements of architecture amd reflects mainstream twentieth-century architecture.
Image by .ygor on Flickr under Creative Commons License.