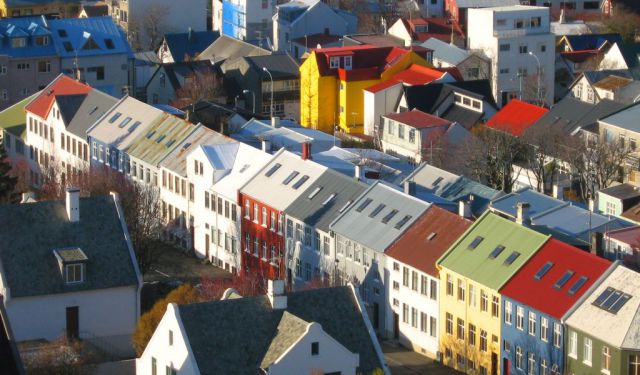 Image by Bjørn Giesenbauer on Wikimedia under Creative Commons License.

Reykjavik, the capital of Iceland, is set very close to the Arctic Circle. Today it is a very clean city with many colorful houses. The locals' everyday life depends mainly on fishing and sewing warm clothes. Their everyday food includes a variety of fish products. The people of Iceland live in a very picturesque place, where sunsets and seascapes are of unimaginable beauty. This self-guided tour will lead you to the places where typical residents of Reykjavik pass their day:
How it works: Download the app "GPSmyCity: Walks in 1K+ Cities" from iTunes App Store or Google Play to your mobile phone or tablet. The app turns your mobile device into a personal tour guide and its built-in GPS navigation functions guide you from one tour stop to next. The app works offline, so no data plan is needed when traveling abroad.

From the earliest times, Icelanders have depended on fishing to make a living. Reykjavik Harbor is thus fittingly one of the oldest places in the city. Here you can see locals at work. There are fishermen with their ships, boats and private yachts. You can see, for example, how locals carry whale meat from the whale ships – boxes full of exotic deep-sea creatures. The harbor also offers an amazing view of the island's dramatic landscape.
Image by briansuda on Flickr under Creative Commons License.
2

Bæjarins beztu pylsur means the best hot dog in town in Icelandic; locals call it "Bæjarins beztu" for short. The hot dog is considered to be the Icelandic national food. Bæjarins beztu is set in the center of Reykjavik, not far from the harbor, and the majority of local workers like to eat here. This hot dog stand has become popular with both locals and tourists. In 2006, it was selected as the best hot dog stand in Europe.
Image by Richard Eriksson on Wikimedia under Creative Commons License.
3

3) Althingishus (The Parliament House) (must see)

The Icelandic Parliament House stands in Austurvöllur Square in the old town of Reykjavik. On the square, you can see local street musicians. Visitors are allowed inside the building to see how the government functions. You will often see groups of children, as local schools frequently organize excursions to Parliament House to show students the country's authorities at work.

Why You Should Visit:
This Parliament House is probably the least guarded one among all its peers; in fact, you can even walk all the way to the door front of this 19th-century building to take your selfie, with no security personnel prohibiting you from doing so.

Image by neate photos on Flickr under Creative Commons License.
Sight description based on wikipedia
4

Tjornin Lake is a small, beautiful lake in the center of Reykjavik. It is a very popular place among locals. They like coming here for a walk with their kids to feed the swans, ducks, seagulls that live on the lake. Bird feeding on the lake shore has led to the lake being called "the biggest bread soup in the world" (stærsta brauðsúpa í heimi). One of the local churches is on the shore of this lake, so you might find some of the active church-going population of Reykjavik in the area. Tjörnin means "the lake" or "the pond". Tarn, meaning "mountain lake", is a northern English dialect word derived from the Norse word tjörn and its genitive/plural tjarnar. Tjörnin was the setting for scenes in the 2010 Icelandic movie Gauragangur.
Image by Laurentgauthier on Wikimedia under Creative Commons License.
Sight description based on wikipedia
5

Menntaskólinn í Reykjavík (often abbreviated MR; official name in English: Reykjavik Junior College) is the oldest gymnasium (Icelandic: Menntaskóli) in Reykjavík, Iceland. The school traces its origin to 1056, when a school was established in Skálholt, and it remains one of the oldest institutions in Iceland. The school was moved to Reykjavík in 1786, but poor housing conditions forced it to move again in 1805 to Bessastaðir near Reykjavík. In 1846 the school was moved to its current location, and a new building was erected for it in Reykjavík. This was the largest building in the country at the time and can be seen on the 500 Icelandic krona bill. It was used initially when Alþingi began to meet again in Reykjavík after a few years hiatus and thus it is in this building where Icelandic independence leader Jón Sigurðsson led the MPs in their famous phrase, 'Vér mótmælum allir'. The school has previously been known as "Lærði skólinn" (The Learned School), "Latínuskólinn" (The Latin School) and by the Latin title "Scholae Reykjavicensis;" it received its present name in 1937. Menntaskólinn í Reykjavík offers a four-year course of study. It usually ends with a degree (stúdentspróf) which gives the graduating student the right to advance to an Icelandic university.
Image by Christian Bickel fingalo on Wikimedia under Creative Commons License.
Sight description based on wikipedia
6

A country's cuisine can tell you a lot about that nation and its traditions. Lækjarbrekka Restaurant, located in the central part of Reykjavik, is a local restaurant famous for its Traditional Icelandic Buffet. The local food of Reykjavik consists mainly of seafood, as Iceland is an island nation. Lækjarbrekka Restaurant serves the best Icelandic food. You can taste such dishes as shark, dried fish, Icelandic langustine, whale and salmon. In addition to the dining experience, the restaurant is located in a 150-year-old historic house.
Image by Fingalo on Wikimedia under Creative Commons License.
7

Olstofan Bar is also known as Kormakur's or Skjoldur's Alehouse. If you visit here, you will meet the upper class of Reykjavik. The pub is simple, but it attracts many Icelandic celebrities and intellectuals. Olstofan Bar offers an extensive variety of drinks, and people like coming here for a good drink and a smoke. There is no dancing allowed in the bar.
Image by Panther1619 on Flickr under Creative Commons License.
8

Reykjavik is famous for it geothermal waters. There are many pools in the city warmed by the earth, which locals really enjoy. Many locals like to come to the pool early in the morning before starting their day. Sundhollin Swimming Pool is the oldest swimming pool in the center of Reykjavík. It is a nice place to relax and to talk with locals. The native Reykjavik people like talking about politics, crises, etc.
Image by Jørn-Morten_Innselset under Creative Commons License.