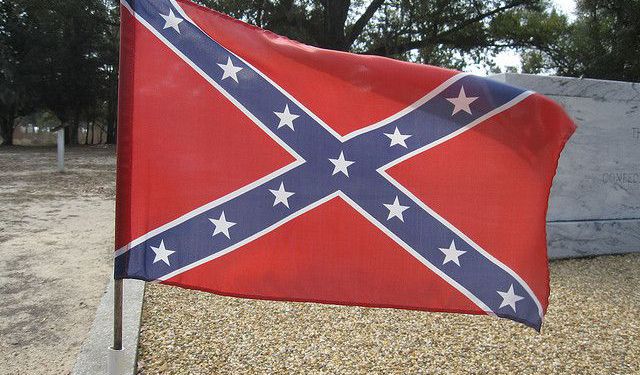 Image by akasped on Flickr under Creative Commons License.

One of the most fascinating aspects of Richmond is its glorious past as the Confederacy's capital. If you are a history buff you’ll love taking this unique tour, which includes all the main sites in the city associated with the American Civil War.
How it works: Download the app "GPSmyCity: Walks in 1K+ Cities" from iTunes App Store or Google Play to your mobile phone or tablet. The app turns your mobile device into a personal tour guide and its built-in GPS navigation functions guide you from one tour stop to next. The app works offline, so no data plan is needed when traveling abroad.

1) White House of the Confederacy (must see)

The White House of the Confederacy is a gray stuccoed neoclassical mansion built in 1818 by John Brockenbrough, who was president of the Bank of Virginia. Designed by Robert Mills, Brockenbrough’s private residence was built in Richmond's affluent Shockoe Hill neighborhood, and was two blocks north of the Virginia State Capitol. Among his neighbors were U.S. Chief Justice John Marshall, Aaron Burr, defense attorney John Wickham, and future U.S. Senator Benjamin Watkins Leigh.

Sold by the Brockenbrough family in 1844, the house passed through a succession of wealthy families throughout the antebellum period, including U.S. Congressman and future Confederate Secretary of War James Seddon. Just prior to the American Civil War, Lewis Dabney Crenshaw purchased the house and added a third floor. He sold the home to the City of Richmond, which in turn rented it to the Confederate government as its Executive Mansion.

The house was abandoned during the evacuation of Richmond on April 2, 1865. Within twelve hours, soldiers from Major General Godfrey Weitzel’s XVIII Corps seized the former Confederate White House, intact. President Abraham Lincoln, who was in nearby City Point, traveled up the James River to tour the captured city, and visited Davis' former residence for about three hours. They held a number of meetings with local officials in the White House. During Reconstruction, the White House of the Confederacy served as the headquarters for Military District Number One. The City of Richmond retook possession of the house, and subsequently used it as Richmond Central School, one of the first public schools in postwar Richmond.

Image by pablo.sanchez on Flickr under Creative Commons License.
Sight description based on wikipedia
2

The Virginia Governor's Mansion, better known as the Executive Mansion, is the official residence of the most important leader in the state. Designed by Alexander Parris, it is the oldest occupied governor's mansion in the United States. The house on Capitol Square has served as the home of Virginia governors and their families since 1813. During the Civil War, it was a center of leadership because Richmond was the second capital of the Confederate States of America and Virginia's statehouse held offices for the Confederacy. Renovated a number of times in the last century, it is now a listed historic monument.
Image by taberandrew on Flickr under Creative Commons License.
Sight description based on wikipedia
3

When it first convened in Richmond in 1780, the Virginia State legislature met in a makeshift building near Shockoe Bottom. Plans for a new building centered on Shockoe Hill, a major hilltop overlooking the falls of the James River. Thomas Jefferson is credited with leading the design of the project, which was modeled after the Maison Carrée at Nîmes in southern France. Jefferson had the architect, Charles-Louis Clérisseau, put the columns in Roman Ionic Order over the more ornate Corinthian columns in France. The General Assembly first meet there in 1792.
Image by Will Weaver on Flickr under Creative Commons License.
Sight description based on wikipedia
4

The Capitol Square was the center of the action in Richmond during the Civil War. The city’s population witnessed soldiers marching on their way to the battlefield here. Nowadays, the square remains the center of political life in Richmond. There are a number of important monuments dotted around the square and, inside the State Capitol building, you can find the final resting place of some of the South's fallen heroes.
Image by Robert English on Flickr under Creative Commons License.
5

Brown's Island holds an important place in US civil war history. Created in 1789, it was part of the canal system through Richmond that was used for delivering supplies, munitions and arms for the confederate army. Nowadays Brown's Island is a prominent music venue that attracts both locals and visitors with its entertaining shows.
Image by taberandrew on Flickr under Creative Commons License.
6

The Tredegar Iron Works was a historic iron foundry in Richmond, opened in 1837. During the American Civil War, the works served as the primary iron and artillery production facility of the Confederate States of America. The iron works survived destruction during the Evacuation Fire of 1865, and continued production through the middle of the 20th century.

Today a National Historic Landmark District, the site and remaining structures serve as the main visitor center for the Richmond National Battlefield Park of the National Park Service, as well as the location of a private museum, The American Civil War Center at Historic Tredegar. The foundry was named in honor of the town of Tredegar, Wales, United Kingdom, where iron works of the same name were constructed in the early 19th century, and which was also the hometown of Rhys Davies, the man originally in charge of constructing the facility. In 1833, a group of Richmond businessmen and industrialists hired Davies, then a young engineer, along with a number of fellow iron workers from the Welsh valley town, to construct the furnaces and rolling mills that later became the Tredegar Iron Works and Belle Isle Iron Works.

In the 1990s, the Tredegar Ironworks was host to the short-lived "Valentine on the James" extension of the Valentine Richmond History Center. Later, the main visitor center for Richmond National Battlefield Park opened at the Tredegar Iron Works site in June, 2000.

Hollywood Cemetery is a large, sprawling cemetery located at 412 South Cherry Street in Richmond. Characterized by rolling hills and winding paths overlooking the James River, it is the resting place of two United States Presidents, James Monroe and John Tyler, as well as the only Confederate States President, Jefferson Davis. It is also the resting place of 25 Confederate generals, more than any other cemetery in the country. Included are George Pickett and J.E.B. Stuart.

Hollywood Cemetery was opened in 1849, constructed on land known as "Harvie's Woods" that was once owned by William Byrd II. It was designed in the rural garden style, with its name, "Hollywood," coming from the holly trees dotting the hills of the property. In 1869, a 90-foot high granite pyramid was built as a memorial to the more than 18,000 enlisted men of the Confederate Army buried in the cemetery.

Hollywood Cemetery is one of Richmond's major tourist attractions. There are many local legends surrounding certain tombs and grave sites in the cemetery, including one about a little girl and the black iron statue of a dog standing watch over her grave. Other notable legends rely on ghosts haunting the many mausoleums. One of the most well-known of these is the legend of the Richmond Vampire. A place rich in history, legend, and gothic landscape, Hollywood Cemetery is also frequented by many of the local students attending Virginia Commonwealth University.