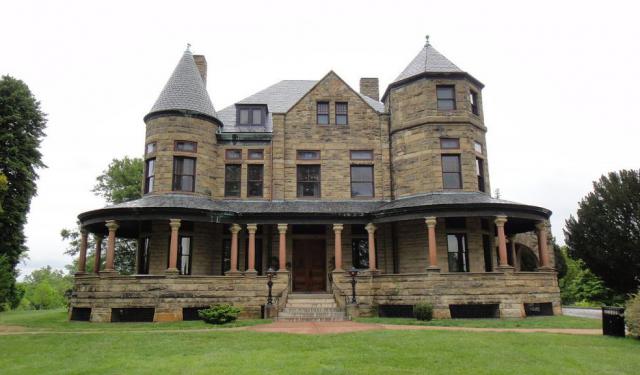 Image by NazarethCollege on Flickr under Creative Commons License.

Richmond is famous for its many architectural and historical landmarks, but it is also a vibrant center for the arts. Take our Cultural Tour to discover the wide variety of theaters, opera houses and other cultural venues that make up the Richmond arts landscape.
How it works: Download the app "GPSmyCity: Walks in 1K+ Cities" from iTunes App Store or Google Play to your mobile phone or tablet. The app turns your mobile device into a personal tour guide and its built-in GPS navigation functions guide you from one tour stop to next. The app works offline, so no data plan is needed when traveling abroad.

The National Theater is a historic theater in Richmond. Part of a city block along the 700 block of Broad Street once known as Theatre Row, it is the only surviving auditorium of the row. The National Theater was built in 1923, originally staging both live entertainment as well as motion-pictures. In 1968, it was converted into a dedicated cinema, which closed on September 5, 1983.

Restored and reopened in the 2000s the theater, operating as The National, is used as a performing arts and music venue.

Image by 5:55PM on Flickr under Creative Commons License.
Sight description based on wikipedia
2

The Richmond CenterStage, formerly known as Carpenter Theater for the Performing Arts, is located at 600 E. Grace Street in downtown Richmond. Originally known as Loew's Theatre, the movie palace was developed by the Loew's Theatres company and was designed by John Eberson. Construction of the building began in 1927 and its doors were opened in 1928.

As a prominent New York architect, John Eberson conceived a design for the Loew's Theater Corporation influenced by both Moorish and Spanish baroque structures. According to architectural historian Calder Loth, "Loew's was considered the most up-to-date theater in the South when it opened on April 9, 1928." Eberson was famous for having invented the "atmospheric theatre" design in which the theater walls resembled an elegant villa or streetscape under a night sky. The Carpenter Theater design evokes a Spanish setting with a faux sky ceiling containing stars and moving clouds.

Image by tempophage on Flickr under Creative Commons License.
Sight description based on wikipedia
3

The Richmond Symphony is based in Richmond. One of the nation's leading regional orchestras, it employs 72-85 musicians who give over 100 performances each season to over 125,000 audience members. Its music director (since 2010) is Steven Smith.

As a nonprofit corporation, the Richmond Symphony is partially supported by the Virginia Commission for the Arts and the National Endowment for the Arts. The orchestra performs five series of Concerts: The Masterworks Series of traditional symphonic repertoire; The Bach Festival Series (chamber orchestra); The Kicked Back Classics Series - selected Masterworks repertoire in a more casual and interactive format; The Symphony Pops Series - lighter popular and classical music; and the Richmond Symphony Family Concert Series - less formal, family-oriented events.

The Carpenter Theatre for the Performing Arts is housed in a building first designed for the Loew’s Theater Corporation which opened in 1928. Nine performing arts groups based in Richmond use this performance venue, including theatre, folklore, ballet, orchestral, jazz, opera and more.
Image by DougFrancis on Flickr under Creative Commons License.
Sight description based on wikipedia
5

The Richmond Ballet Studio Theatre was established in 1957 by a group of local dancers. It has been the home of the School of Richmond Ballet since 1975. Over time, the school has evolved from a simple student-run company into today's established and reputable outfit.
Image by Esparta on Flickr under Creative Commons License.
6

The theatre, originally known as the Richmond Theatre and Opera House, is structured into the familiar stalls, dress and upper circles, with four boxes at dress level. The auditorium is a mixture of gilt detailing and red plush fabrics, covering seats and front of circles.

In the early 1990s the theatre underwent a major overhaul overseen by the designer Carl Toms. This included a side extension giving more space for the audience and includes a 'Matcham Room’. Its interior and exterior has been used as a movie set in many films (e.g. Finding Neverland, National Treasure) and TV programmes (e.g. Jonathan Creek). The theatre is now part of the Ambassador Theatre Group and has a weekly schedule of plays and musicals, usually given by professional touring companies. Pre-West End shows can sometimes be seen. There is a Christmas and New Year pantomime tradition and many of Britain's greatest music hall and pantomime performers have appeared there.

The present Richmond Theatre, in the London Borough of Richmond upon Thames, is a British Victorian theatre located on Little Green, adjacent to Richmond Green. It opened on 18 September 1899 with a performance of As You Like It, and is one of the finest surviving examples of the work of theatre architect Frank Matcham.

The Elegba Folklore Society is a cultural celebration of Africa and African-Americans. Visitors can enjoy many different artworks from Africa here, as well as history tours and a spectacular performance in African village style.
Image by Pseudomoi on Wikimedia under Creative Commons License.